Yep, that's a pickup truck with the face of a Hakosuka GT-R. 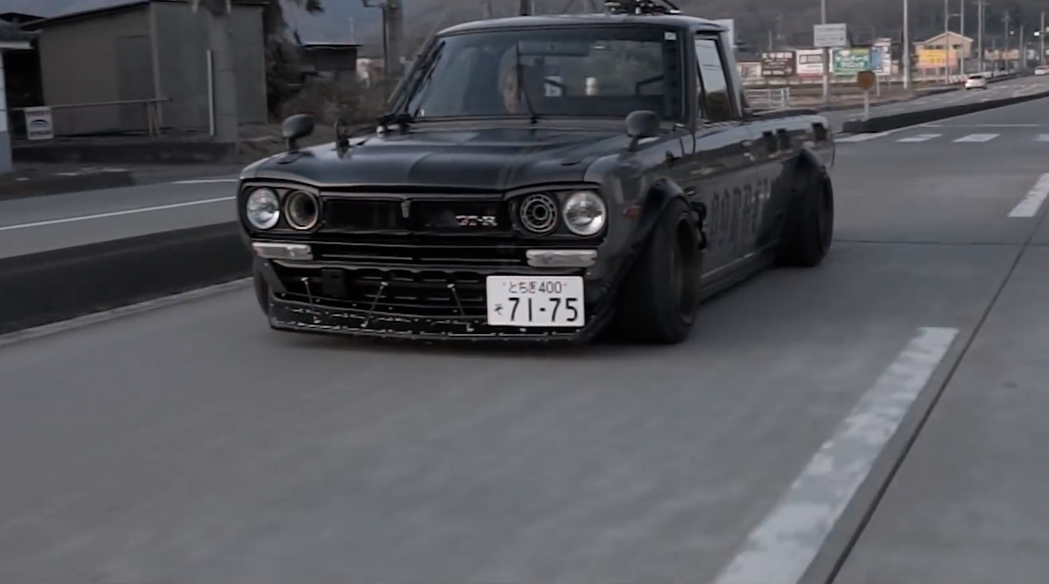 Sometimes life stands in between you and your dream car. Mr. Michi, the man behind Japan's Tochigi-based 09 Racing, found himself in this conundrum. As the owner of a motorcycle shop, Michi had a need to transport bikes in his truck. He spent more of his time in the cab of his Nissan Sunny than in his OG Nissan Skyline GT-R aka Hakosuka. Rather than accept the two as separate experiences, he sought to combine the two.

According to a special highlight video uploaded by YouTube channel Tokyo Tuner, while Michi wanted to own both the work truck and the GT-R, he said his finances would not allow him to keep both and spruce up the truck. So, he sold the Skyline in early-2013 to finance his truck project. He calls the resulting vehicle "Hakotora," a portmanteau of Hakosuka and the Japanese word for truck, torakku. In an email to The Drive, Michi explained the Hakotora's 'GB-R' badge found on its grille, in lieu of GT-R.

"GB is the long-bed car-code of the Datsun 1200 ute," Michi told The Drive. "In the case of short beds, the code will only be B. My Hakotora is a long bed."

The Hakotora is still largely function over form underneath, with anchoring gear in the bed to haul bikes, and a nearly stock 1.2 liter four-cylinder A12 engine as opposed to the 2.0 liter inline six found in the Hakosuka itself. It's still a work in progress in need of a rear suspension modification to resist bottoming out with bikes in the back, but plans for those changes are in development.

As for the bikes, they no longer dominate his business; fans of his Hakotora have crawled out from the woodwork to demand replica kits for their own pickups, now accounting for around half of his customers, according to Michi. Hakotora kits cost up to 500,000 yen ($4,500) according to Michi, with international shipping adding up to another 240,000 yen ($2,100), for a maximum price of around $6,600. Despite the tall price, Michi says he has sold hundreds, and he still has orders to fill.

"The Hakotora kit has sold over 100 sets so far," Michi revealed to The Drive. "There are still many orders."

"Many Hakotora owners have a high spec engine and have completed a very wonderful track car. Various swaps such as 4A-GE, SR20DET, VQ, and 4G63 have been done."

Nissan Teases A New GT-R
The Drive
MORE TO READ