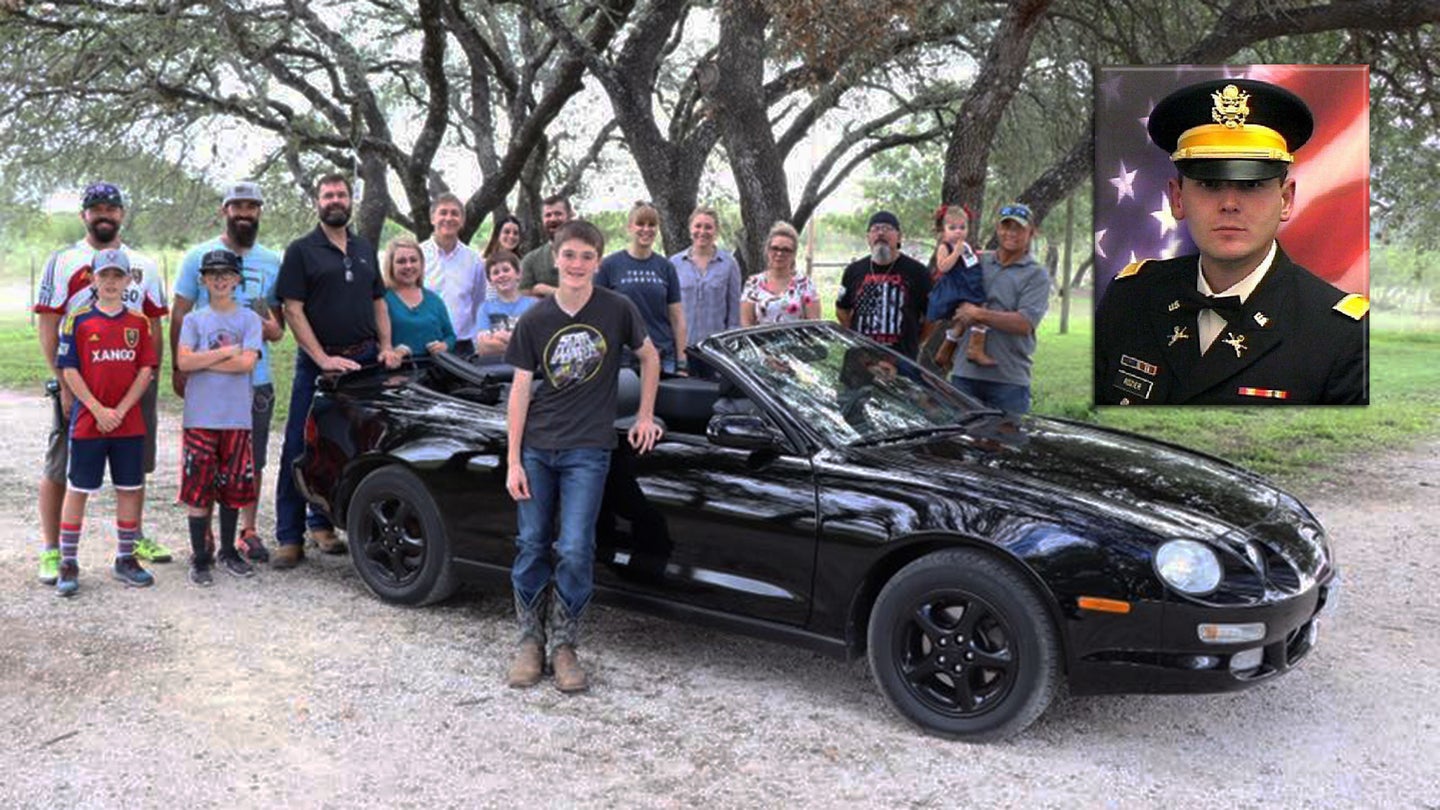 You may have heard this tale before: Person tracks down long-lost family car, buys it, and secretly restores it as a gift to their father or grandmother or whoever. But the story of U.S. Army First Lt. Jonathan Rozier (KIA 07/19/2003), his old 1999 Toyota Celica convertible, and his widow tracking down the car to surprise his now-teenage son 14 years later is filled with enough kindness, generosity, and luck to melt the coldest of hearts.

It all started back in August, when Jessica Johns began to think about a good first car for her 15-year-old son Justin. Only one thing came to mind: The 1999 Toyota Celica convertible once owned by her husband, Lt. Jonathan Rozier. Rozier was just 25 years old when he was killed by an unexploded rocket-propelled grenade in Baghdad back in the early stages of the Iraq War, and his young widow was forced to sell the car to care for a nine-month-old baby alone. She knew Justin treasures anything that belonged to his father, who he never really met. And she knew the same would be true for the Celica.

"I know that he wishes his dad was here... I feel like this is something that would connect him," Johns told CBS News.

Armed with little more than hope, Johns put out a call on Facebook with the VIN number, a short summary of her story, and a few pictures of the car, Jon, and Justin.

In less than a week, the story spread and complete strangers helped her track the car to Utah. The car was a little worse for wear after a decade and a half, and after learning about the story, the current owner agreed to sell the Celica back to Johns at the beginning of September. “I think that your son will get more enjoyment out of having his dad’s car than I would," he said at the time, she told NBC News.

Around that time, a Utah-based veterans organization called Follow the Flag got in contact with Johns and offered to help. The group raised donations to cover both the purchase price of the car and a full-blown restoration to bring the Celica back to showroom shape, and founder Kyle Fox personally drove the convertible from Utah to Texas to surprise Justin at his 15th birthday party.

The teen was completely blown away by the surprise. Frankly, we are as well, considering how the Celica managed to avoid all manner of calamities that can befall a car over fifteen years on the road. No accidents, no ill-considered mods, no major mechanical failures. And it was an emotional moment for Johns as well—as she told NBC News, Justin looked "so much like his dad" the second he climbed behind the wheel.

"It's a link to the past for him. It's a big thing for me too. I never got to see him come home. So that just one moment right there was—I think I needed that," she said.

On Veterans Day, We Remember 10 Racers Who Served

The heroic, the tragic and the extraordinary.