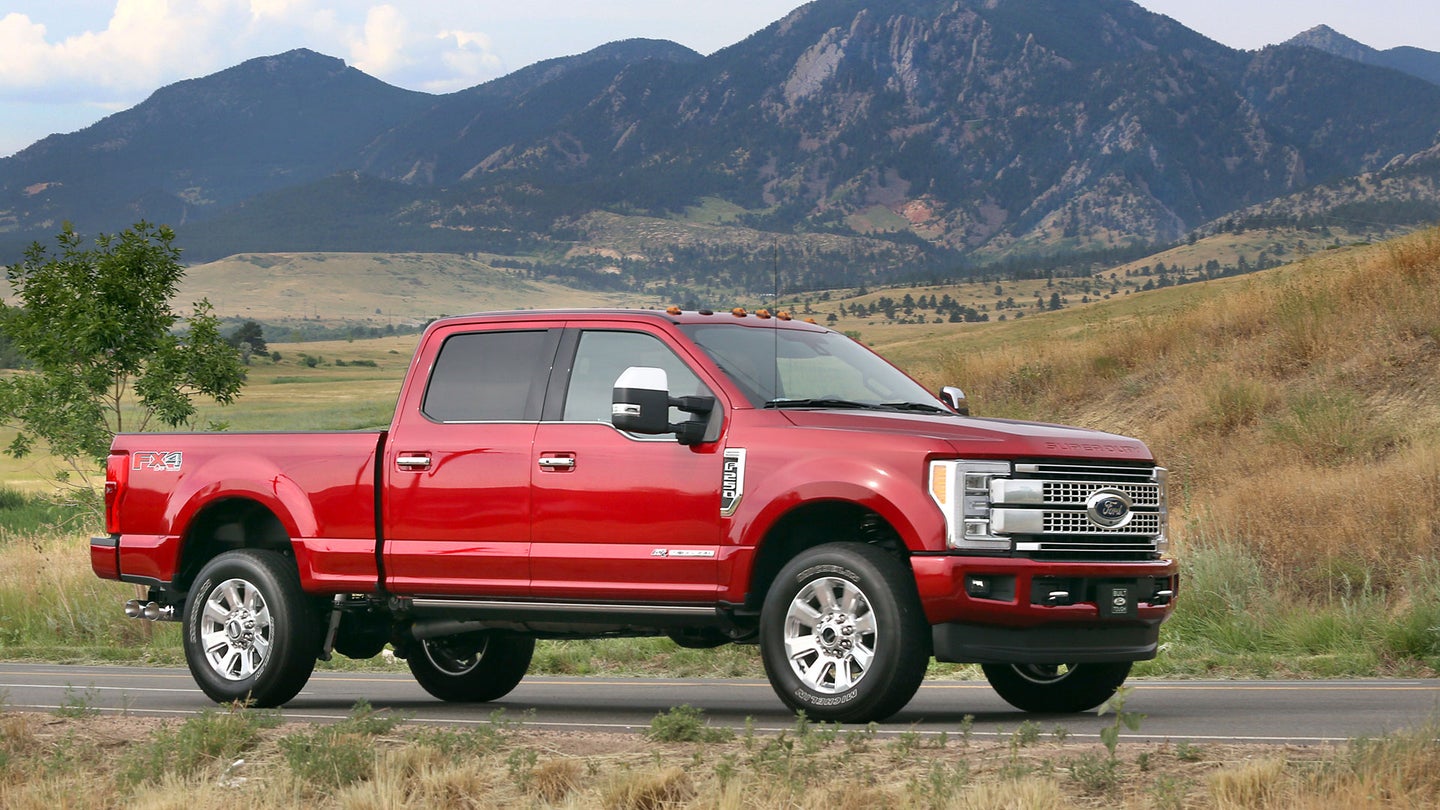 Testing a heavy-duty pickup in New York can be like going to Peter Luger steakhouse and ordering the tossed salad: You can say you’ve been there, but you didn’t actually experience it.

I admit to being part of the problem. These days, a case of wine constitutes a big payload for me. So when a Ford Super Duty F-250 King Ranch turned onto my Brooklyn street, its 6.7-liter Powerstroke diesel chugging with an insane 925 pound-feet of torque—within sight of 18-wheeler territory—I was determined to use this truck as God and Jerry Reed intended. As the first all-new Super Duty in more than 15 years, this is also a big deal for Ford: Buttress the redesigned truck, buttress their dominance of the topsoil-hauling field, with better than 40 percent of heavy-duty pickup sales.

Those owners tend to focus on substance, especially buyers who shell out $8,595 for the 440-hp diesel V8 and rightly expect 300,000 miles or more without a major rebuild. But a little style doesn’t hurt. And the Ford is a spectacular, chrome-jawed Tonka truck at grown-boy scale, ready to play the bully in the sandbox of your choice.

I chose concrete instead. Steve, my pickup-driving contractor neighbor, took one look at the mammoth Ford and directed me to Extech Building Materials in our Red Hook neighborhood. Extech manager Piotr Worosz got into the spirit, even though I wasn’t buying so much as a drill bit. I dropped the Ford’s tailgate (nicely damped for hands-free lowering), slid out its integrated bed step, and peered beneath the truck to see what we were working with. The new, fully boxed steel frame is massive, and even newly added crossmembers look as thick as Dwayne Johnson’s forearms. Ford claims the new structure, 95 percent of it formed from high-strength steel, is 24 times more rigid than before. Like its groundbreaking F-150 cousin, the Super Duty is the first pickup in its class with a lightweight aluminum cab and bed. Ford claims weight savings of up to 350 pounds, though compared with the F-150, the Super Duty’s aluminum gauge is about 20 percent thicker for more robust performance. Axles, springs, linkages and suspension are all beefed up.

Worosz directed his forklift driver to lower a pallet full of Quikrete concrete mix – just add water – onto the Ford’s pristine bed. Forty-two bags, 82 pounds each, a total of 3,360 pounds. The rear leaf springs curled downward under their groaning load, but left plenty of room between the rear fenders and glitzy 20-inch chrome wheels. With just enough space in the eight-foot cargo bed (a 6.75-footer is standard) I considered adding a second pallet to boost the payload to nearly 6,800 pounds -- within sight of the truck’s own weight of about 7,500 pounds -- but thought the better of it.

Yet in maxed-out, F-450 dually configuration, the new Super Duty is indeed rated to haul 7,630 pounds in its bed—more than a pair of Ford Escape SUV’s—and tow a staggering 32,500 pounds with a bed-mounted gooseneck hitch. Our Will Sabel Courtney calculated that this Super Duty could tow 20 Formula One race cars, an F/A 18E Super Hornet jet fighter, or a family of Tyrannosaurus Rex.

My F-250 was rated to haul “only” 3,450 pounds in its bed and tow 15,000 pounds, but that rating is clearly conservative. Essentially, my truck was hauling a Corvette in its bed, but it might as well have been a sack of groceries, or the aforementioned case of wine. This diesel-driven Hulk still bounded from stoplights, leaving puny cars in its roaring wake. I only really noticed the big load when I turned, but even that didn’t prevent the Ford from rocketing past 70 mph on a Brooklyn freeway.

Switching the Ford into its Tow/Haul mode via the shifter stalk, I did notice and appreciate its revised transmission strategy and integrated exhaust brake: A single tap on the brake triggers higher exhaust back pressure to slow the truck with less wear-and-tear on the transmission. With the transmission holding lower gears, critical for long-and-loaded downhill runs, just a lift off the throttle slowed the truck without me having to finesse the brake pedal at all. Nice.

I’ll consider this a first: Hauling nearly two tons in a plush pickup while getting a seat massage and toasting my hands on a leather-wrapped steering wheel. I could have kept going to the tip of Montauk in the Hamptons, but I knew that Peter needed his concrete back. When I pulled back into Extech’s lot, the Ford’s adaptive steering sped up the ratio, allowing me to cut sharp turns with less spinning of the steering wheel.

As for trailering, even newbies can avoid sweaty palms, either forward or in reverse. Standard trailer sway control applies individual brakes to steady a wobbling caboose. A brake controller with an onscreen monitor balances output of the truck's and trailer's brakes. Radar sensors monitor the blind spots of trailers up to 33 feet long, and a trailer tire-pressure monitor is a segment first. Dynamic Hitch Assist guides your path on a camera view to help hitch up with no need for a human spotter. Coolest of all is the new Ultimate Trailer Tow system: First, input the dimensions of your trailer on the driver's info display (which stores multiple trailer presets). Cameras in the side mirrors and tailgate—or a fourth camera on the trailer itself—display a bird’s eye view of the pickup and its load.

A superimposed steering wheel flashes animated steering directions to guide you backwards with confidence, with alerts if you’re about to jackknife the trailer. The Super Duty, however, doesn’t get the F-150’s dashboard knob that lets you input subtle steering moves without touching the wheel, because its steering rack remains hydraulic rather than electric.

That was about the only thing missing on this luxurious beast. The cab in Ford’s new Crew Cab configuration grows four inches longer. That opens up 43.6 inches of rear legroom, two inches more than Mercedes’ flagship S-Class sedan, enough to spoil three strapping construction workers. Even those rear chairs were heated, and flip up to reveal underseat storage. This being the King Ranch edition (just a step below Platinum in a dizzying range of body styles, powertrains and optional packages), the boss man may tell those boys to watch their muddy boots. My cab included a cattle drive’s worth of saddle-brown Mesa leather, a console large enough to hold the foreman’s laptop, Ford’s latest Sync3 touchscreen infotainment and a wealth of options: Massaging multicontour front seats, adaptive cruise control, power deployable running boards and more. There was no CB radio, but a row of headliner switches lit up individual yellow roof clearance lights atop the cab. Ideally, they’d be metal toggle switches, rather than plastic.

It’s counterintuitive, but driving an F-250 in New York is actually fun and relaxing – aside from trying to negotiate narrow streets without crushing a Smart car like a Coors can. Stretching just over 22 feet, or three feet longer than a Rolls-Royce Phantom, the long-bed Super Duty is so forbidding that even sociopathic cab drivers don’t mess with you in gravy-thick Manhattan traffic. When you need to turn, you barely need to signal; just ease over, and the waters part like you’re Moses in a trucker hat. The Ford seems to ride even higher than a Dodge Ram, that tree fort of pickup trucks: I pulled alongside an MTA city bus and found myself looking squarely into the eyes of passengers. And while the unladen pickup jiggles just a bit over broken pavement, the Ford shows similar advances in refinement and ride quality as its HD Dodge or Chevy counterparts. Heavy-duties used to deliver more head-toss than a hardcore mosh pit. Now they’re smoothies, yet more capable than ever. For the Ford, credit new hydraulic cab mounts, which help buffer the cab against quaking, squeaks and rattles.

This dream truck, for people who slumber in Carharrt pajamas, comes at a dream price. A Super Duty 4x4 Crew Cab starts from $58,850 with the 385-hp gasoline V8, already about $25,000 more than your basic F-250 2WD Regular Cab. With options including the $8,595 diesel, a twin-panel sunroof and power-deployable running boards, my King Ranch reached a royal $77,700.

In other words, you won’t see too many owners hauling manure in the King Ranch. This one’s for the guy who bosses the guy who hauls the manure. As Mel Brooks said, it’s good to be the king.

Only in The Lone Star State!