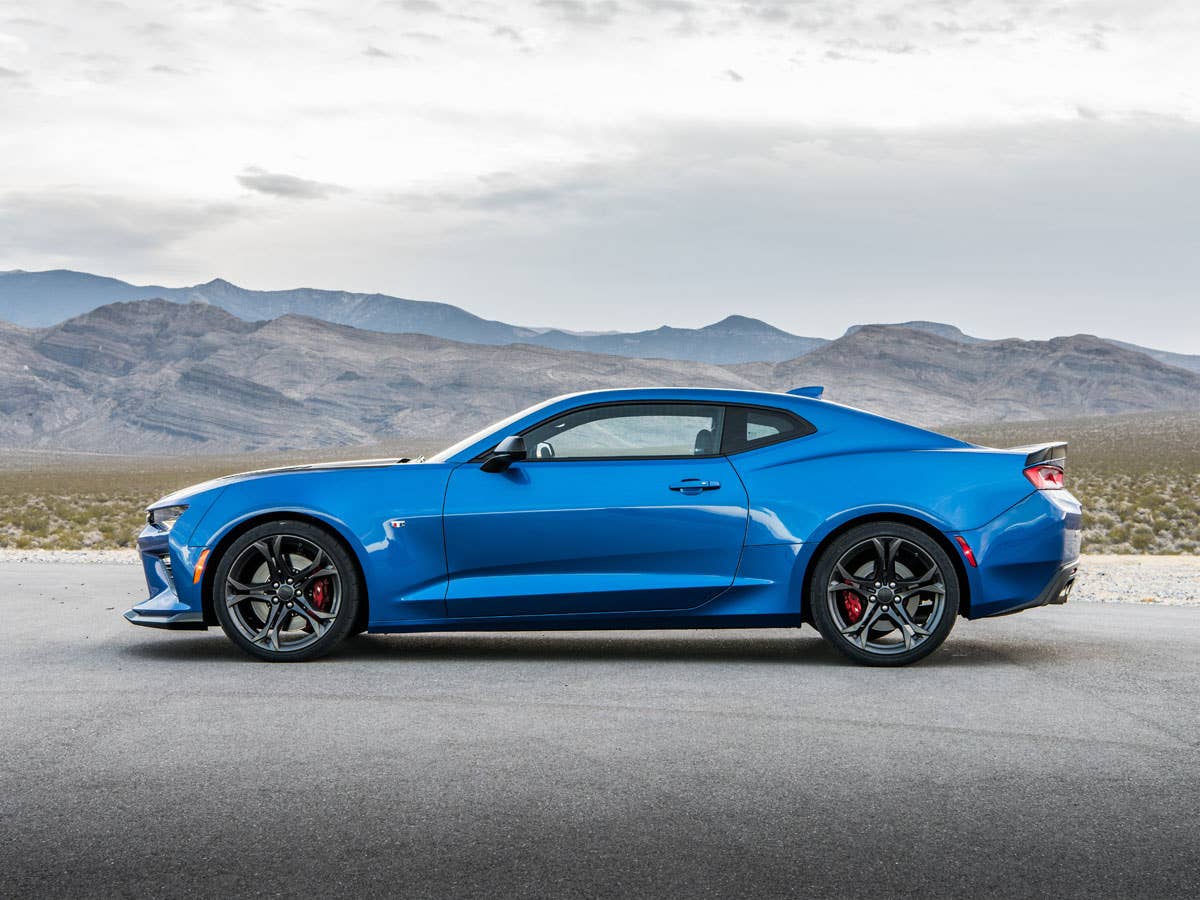 We keep hearing that cars are passé. That people can get along fine without one. And when they do need a car, it’ll be Uber to the rescue, with or without a scruffy human behind the wheel.

That point of view maybe be gaining traction in big cities, but it’s mostly the same-old in a shiny new wrapper. Manhattan dwellers have relied on a cutting-edge “mobility play”—to use today’s stock-inflating Valleyspeak—for decades. They’re called the yellow cab, black car and gypsy cab, the latter the original ride-hailing app.

But beyond New York or San Francisco, the view from the showroom floor and designers’ studio is the opposite. If cars are passé, why are more people buying new models, here and around the world, than at any time in human history? Apparently, Peak Car, like Peak Oil, is a theory that’s debunked with every new sales record—including 2016, where America may yet sneak past 2015’s all-timer of 17.47 million sales.

The truth (sad, happy or in-between) is that if you’re living in the ‘burbs of a Minneapolis, Miami, Dallas or Detroit—or across 90-some percent of this great land—mass transit and car-sharing social theory remain largely irrelevant to your life. Families still need a car, or two or three, not a phone app and a robotic chauffeur. That’s not changing anytime soon. Bet on it, or put your money on Uber, a company that just pissed away $800 million in a single quarter, and maybe $3 billion this year.

The good part is a cliché, I know, but cliché because it’s true: We are living in a shining, golden age of automobiles, and 2016 continued to buff the glow. Design and performance aside, the digital revolution deserves both year-end applause and continued scrutiny: Features like pre- collision warnings and automated braking are already proving their value in reduced accidents and insurance claims. But crash fatalities are sharply on the rise after decades of decline, and it’s almost certainly due to digital distraction from smart phones, onboard touchscreens and other devices – and for one unfortunate Tesla driver, overconfidence in an Autopilot system that he assumed had everything under control.

The Drive, of course, is predicated on the idea that people enjoy cars for all kinds of reasons—including the old-school pleasure of driving. After testing roughly 100 new models this year myself, I had the usual hell of a time winnowing down to a Top 10. As I’ve done since my years as The New York Times’ auto critic, the focus is on cars that are all-new or significantly redesigned for 2016. A few models fell just short: Honorable mentions include the Honda Ridgeline, perhaps the world’s smartest pickup. For Beast Mode truckers, the Ford Super Duty F-250 with its Power Stroke diesel—with a mere 925 pound-feet of torque—could probably tow the moon down to earth. One other surprise, at least to me: Three General Motors vehicles made the cut. Wow.

With that, and in no particular order, here’s my personal Top Ten, the automotive cream of 2016:

After years of falling for Alfa’s empty promises, I had my critical dagger out like Brutus awaiting Caesar’s entrance. The Giulia disarmed me instead, spinning my head in a 505-horsepower whirlwind of sedan greatness. With its hyper-boosted 2.9-liter twin-turbo V6, the $72,000 Guilia Quadrifoglio isn’t a V8 gut-punch like a Mercedes-AMG C63 S—though it’s just as quick to 60 mph, at 3.8 seconds, and faster up top at 191 mph. Nor is the Alfa as luxurious inside as a Benz or Audi. But the Giulia deals adrenaline and sensory stimulation like Walter White, including the fastest steering and nerviest handling in the class. The Giulia does it all in a big-hearted, analog position that defies the trend toward soulless RoboCars. And unlike many civilian-issue luxury rivals, the $37,995 base model is a compelling sport sedan in its own right, powered by a 280-hp turbo four.

In back-to-back track laps last month, I strongly suspected that my Camaro 1LE was putting up faster times than an $85,000 BMW M4. But I wasn’t timing, so I couldn’t be sure. Days later, I learn that the Camaro not only out-lapped an M4 at Mazda Raceway Laguna Seca (as tested by Motor Trend), but was just 0.11 seconds behind a 493-hp, $135,000 M4 GTS. The very thought sounds ridiculous, like saying a Pinto could beat a Porsche. But it’s true. Bomb shelters still have better exterior sightlines than the Camaro, but its performance upsets a stereotypical world order—Germany and Europe first, America last – that has fueled a million put-downs from the likes of Jeremy Clarkson. This perennial knuckle dragger has become an MMA fighter, ready to rain fists in snobby faces everywhere.

When I laid eyes on the redesigned Q7 at one of Audi’s high-design auto-show displays, I called it suburban-square and uninspired. I was so wrong. Parked next to this more-rectilinear Q7, the old model actually recalls an aging Orca. And everything else gets better in the 2017 model, starting with a supercharged V6 whose 333 horsepower feels closer to 400. Bone tired after two days in a Skip Barber racer in Pennsylvania, I put trust in the Q7 to get me home to New York in one piece. Couldn’t have picked a better vehicle for the nighttime task: A smooth, sumptuous German fortress, armed with the Virtual Cockpit, Night Vision and Audi’s latest semi-autonomous and safety technology.

Exhibit A in the upward evolution of the automobile: The once-humble economy hatchback -- Chariot of Nerds, Game of Drones -- now bristling with 350 horsepower and track-attack skills that would have put it in Porsche territory not long ago. With an improbable 350 horsepower, the Focus RS cranks to 60 mph in around 4.8 seconds. But its ingenious torque-vectoring AWD unit and drift mode are the bigger story, helping the Ford pivot faster than a campaigning politician.

If any $200,000 car can be considered “entry level,” then your typical BMW must be taking the servant’s entrance. But the cockeyed standards of the rich aside, the 570GT (and 570S) emerged as my favorites in be the almost, not-quite-a-supercar class. With its glass hatch, cozy leather luggage shelf, and generous range of suspension settings, the GT is McLaren’s closest thing yet to a daily-driving sports car. Yet this mid-engine screamer is still batshit fast, including a 204-mph top speed, and blows bystanders’ minds as reliably as any Lamborghini. That includes the erectile function of McLaren’s signature dihedral doors, perking up whenever you climb in or out. Am I saying the McLaren is sexier than a Porsche 911 Turbo or Mercedes AMG GT? You bet.

Mercedes’ dreamboat S-Class convertible could easily make the cut in this large-inseam class, but I’m going with the CT6. The CT6 finally puts everything together for Cadillac: Serious street presence, a tastefully appointed cabin and a perfectly blended cocktail of creamy ride and muscular handling. That balance begins with remarkably slender curb weight, nearly 1,000 fewer pounds in base trim than a Mercedes S-Class. A realistic starting price of about $55,000 underlines the Cadillac brand's new value play. Jump to $65,000 for a lusty twin-turbo V6 version with 404 horsepower—basically the best six-cylinder GM has ever produced. The all-new Lincoln Continental looks damn swanky, but the Conti can’t match the Caddy’s overall performance and sophistication.

I like big revs the way Sir Mixalot likes big butts, so I miss chasing the 9,000-rpm tail of Ferrari’s naturally aspirated V8’s. But the 488 GTB Fiorano coupe and Spider are 661-horsepower consolation prizes, tied up in a pretty Italian bow. Their twin-turbocharged V8 runs out of breath by 7,500 rpm, but with 99 more horses and an insane 40-percent torque bump versus the free-breathing V8, I’ve stopped complaining. Count me in with our Matt Farah.

I’ve tested a few million dollars worth of supercars this year, most spectacular in their own way, yet they all bow before this Italian emperor. Like the dearly departed 458 Italia and Speciale, the 488 is the car you call “beautiful” with no caveats—not just “imposing” or “technical" or “outrageous”—and that appeals to my shallow side. The Ferrari is nearly as comfortable as the Audi R8 V10, a benchmark for livable supercars, but just sitting inside the Ferrari gets my heart pumping; once on the road, an onboard, 007-style defibrillator would be a great addition. And I could and would drive that Ferrari every damn day, something I’d never say about a bone-crunching McLaren 675LT or the alien warship Lamborghini Aventador SV.

When people—meaning normal people on a budget—ask me which new compact car they should buy, I’d almost stopped mentioning the Honda Civic. Cars like the Mazda3, Volkswagen Golf and Ford Focus had stolen the Honda’s thunder. The Civic seemed stuck in a holding pattern that threatened to make it a Corolla-type commodity: Noteworthy for top reliability and resale value, but little else. Well, the Civic is baaack, a small-car Terminator with the style, shipshape interior and frisky handling we expect from this sedan stalwart. The Civic hatchback is equally endearing, and an upcoming Si version is gearing up for a turbocharged action-movie mission, to make Honda relevant to driving enthusiasts again: A Si coupe is coming next year, followed by a Type R with roughly 300 horsepower.

I dithered over this one, big time. The Bolt earns an “A” in effort, technology and performance. GM and Chevrolet have largely delivered on their promise: Beating Tesla’s Model 3 to market with an electric car that drives beautifully, travels at least 240 miles per charge in real-world conditions, and costs $29,995 after a $7,500 federal tax credit. The Bolt also achieves a frugal 119 mpge in combined city and highway driving. But media testers seem to be rooting so hard for the Bolt’s success that they’re downplaying what I see as a B-minus in overall execution. For such a high-profile EV, the uninspired, econobox styling betrays the lavish technology beneath. The interior pinches pennies like an electric Scrooge. Despite the letdowns, the Bolt more than doubles the real-world range of previous affordable EVs, and driving it will put a smile on your face and a green halo on your noggin.

I’ve said all I need to say right here.

Lawrence Ulrich, The Drive’s Chief Auto Critic, is an award-winning auto journalist and former chief auto critic for The New York Times and Detroit Free Press. The Detroit native and Brooklyn gentrifier owns a troubled ’93 Mazda RX-7 R1, but may want to give it a good home. Follow him on Twitter.