Along Came a Fiat 124 Spider 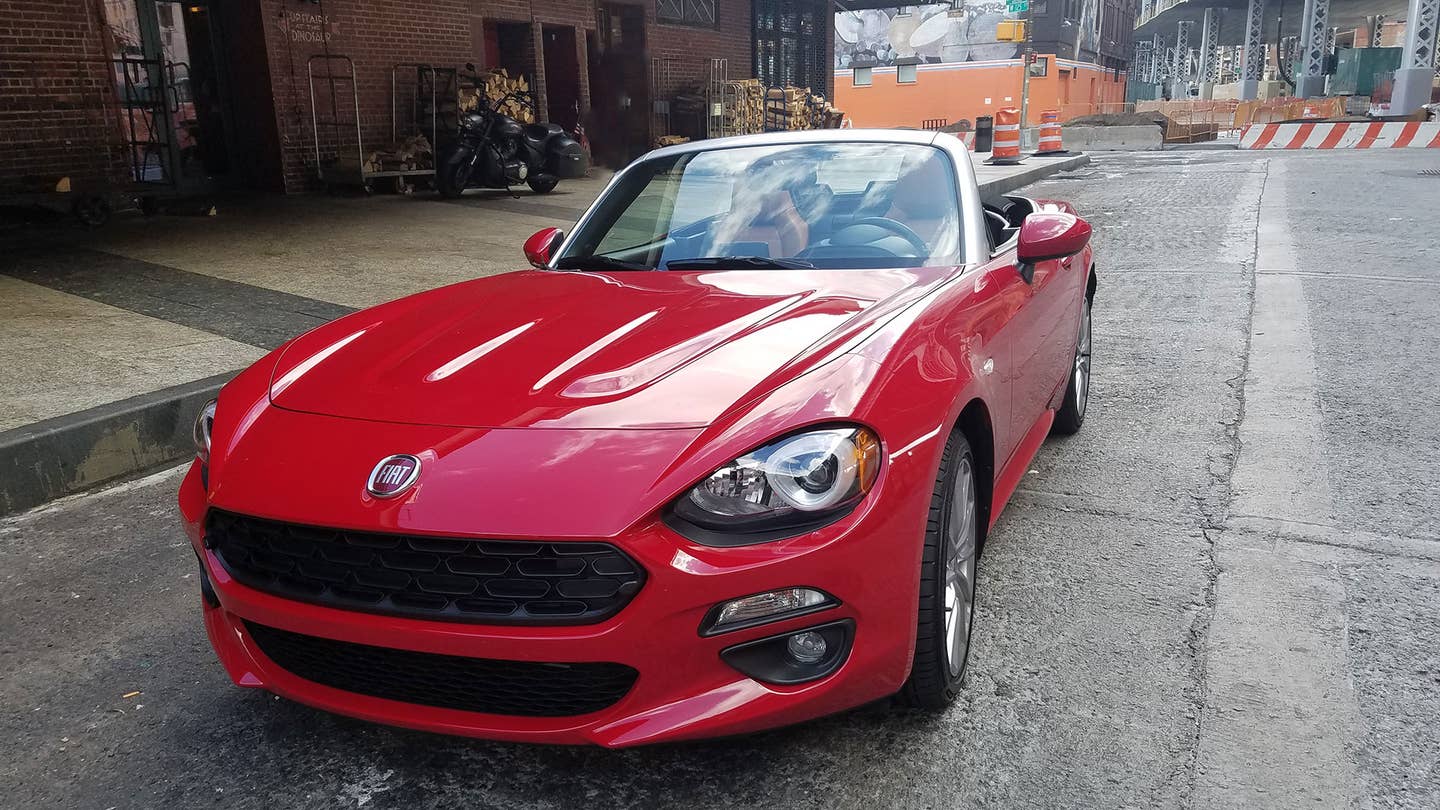 This was my week to study arachnids: A Ferrari 488 Spider under the microscope, followed by a smaller, weaker specimen, the Fiat 124 Spider.

Now, the comparison you've come to hear about is surely Fiat Spider versus Mazda Miata; not a $31,000 Fiat against a $390,000 Ferrari. The original, Pininfarina-built 124 Spider became America’s favorite Fiat, finding about 10,000 sun worshippers a year on average between 1968 and 1985. Now Fiat has turned to Mazda to reanimate its classic, building the modern Spider in Hiroshima, Japan, on the bones of the latest MX-5 Miata.

Try as I might to approach the 160-horsepower Fiat with an open mind, a 661-horsepower Ferrari and the big shoes of the small Miata make it a challenge. If the Fiat doesn't already seem the soft, potentially ineffectual sibling in this convertible Cosa Nostra – Fredo Corleone to Michael – my first glimpse of its six-speed automatic shifter makes my heart sink.

But it turns out you can’t ruin a Miata. Or a Fiata. This Spider can’t equal the Miata’s web-slinging steering and handling, which make the Mazda an affordable superhero among sports cars. At just over 2,500 pounds, the Fiat is some 140 pounds heavier and consequently slower than the Mazda, despite a turbocharged edge in horsepower and torque. But damn if I don’t have a great time in the Fiat, barely an hour after tracing some identical Hudson Valley roads in the Ferrari. The Fiat shows more warts than the Miata. But like its doppelgänger, it's still tiny, sprightly and charming as hell. If you love roadsters, like I do, those charms grow stronger with every hour behind the wheel.

Meeting the first imperative of a roadster, the Fiat is certainly a cutie pie, even as it seems about as Italian as Papa John’s. The design is an old-new pastiche, but an elegant one, despite evident workarounds demanded by the Mazda’s basic template. The Fiat is five inches longer, its old-school jutting hood capped with handsome U-shaped bulges that nod to designer Tom Tjaarda’s original. Luminous oval headlamps, recessed behind scalloped cat’s-eye openings, seem one area where the Fiat tops its Japanese cousin. Busy stacked grilles are less successful, stuffed with bulky black mesh like something from a Dodge Charger. I still think the aggressive, curvy-hipped Miata looks better – and oddly, more Mediterranean – than Fiat’s spin-off, but I’ll let you be the beholder.

Disappointingly but unsurprisingly, Fiat lacked the cash or wherewithal to leave much Italian scent on the interior, save for a Fiat badge on the steering wheel, a few soft-touch overlays and ribbing on reshaped leather seats. The rest is a virtual Xerox, from driver’s gauges to Mazda’s decent screen-based infotainment system. That’s not the worst thing, considering how much we enjoy the unpretentious design and tea-for-two intimacy of the Mazda’s cabin. But as our Brett Berk noted, as the proud owner of a vintage Spider, a buyer might expect more from the Miata’s Italian cousin than some satin-glossed plastic on door handles.

The Fiat does fit a thicker-insulated cloth top as standard, where the Mazda reserves it for its priciest Grand Touring edition. Like the Mazda, a single-latch manual softtop adopts the new, blessedly easy helper spring that lets you reach back and swing the roof shut without tearing a rotator cuff.

Pointed north through Manhattan, I first notice the yin-yang of the Fiat’s relatively relaxed suspension. The payoff is excellent ride quality for a roadster that has you sitting practically atop its rear axle. Roving over moon-cratered pavement in Harlem, the Fiat doesn’t even slosh my coffee, though the cupholders’ behind-your-elbows location requires a ridiculous, awkward reach. In a final practical edge, the Fiat’s trunk is a skosh larger than the Miata’s, though there’s still no glovebox, only a lidded binnacle behind those cupholders. As in the Mazda, the lack of a telescoping steering wheel forces me to scoot up closer than I’d prefer, knees nearly brushing the dashboard.

With the Fiat’s top open and tumid summer clouds flipping a coin on afternoon showers, I make haste toward Bear Mountain, its forested bulk rising along the Hudson River. Where the Mazda’s 2.0-liter, naturally aspirated four-cylinder makes 155 horsepower and 148 pound-feet of torque, the Spider gets Fiat’s 1.4-liter Multi-Air turbo four with 160 horses and 184 pound-feet. Honestly, neither engine is a superstar, but the Mazda’s revs higher and sings a bit better. The Fiat takes 6.8 seconds to reach 60 mph, 0.5 seconds behind Mazda’s automatic and 0.9 seconds slower than a manual Miata. Top down at freeway speeds, I barely hear a peep from the Fiat’s whispery engine and exhaust. Once its turbo spools up, the Fiat pulls briskly, with plenty of juice to keep the good times rolling. But until you kick the Fiat awake with an angry right foot, its responses are slower than a DMV clerk. As in the 500C and other Fiat applications, the Multi-Air is rather subdued and emotionless for an Italian car: It’s Ingmar Bergman where you’re hoping for Fellini. Let’s hope the coming Abarth version can at least mimic the Cri de Coeur of this engine in that pocket Napoleon, the Fiat 500 Abarth.

This more-deluxe Spider Lusso version, starting from $28,400, doesn’t offer a manual transmission, or even the paddle shifters that are standard on automatic Miatas, so I’m wangling its console shift lever in manual mode for all it’s worth. (The basic $25,990 Classica edition offers the stellar, optional six-speed manual from the previous-gen Miata; a performance-tuned Abarth edition, on sale in late summer for $29,190, offers both that manual and a paddle-shifted automatic).

The Miata and Fiat Spider run identical 17-inch Bridgestone Potenza summer tires, and both offer near 50/50 weight balance. Yet the Mazda shows more gumption in faster corners. The Fiat also displays more body roll than the Miata, and that’s saying something. Ascribe it all to the Fiat’s softer suspension tuning, including a level of brake dive that’s more like stage dive: The Fiat’s front end visibly plummets during hard stops, and springs back up when I ease off the pedal, upsetting the car’s poise. After just 15 minutes of barnstorming on downhill twisties, I manage to fade the Fiat’s brakes, the rear rotors smoking like the crackling skin of a Porchetta. In a Miata test with editor Mike Guy, over hours-long romps in lonely California canyons, we never came close to cooking the brakes.

After the brakes cool off, I resume playing Fiat’s own game, flashing back a few decades and thrashing the Spider like a Pininfarina roadster of yore. Then or now, the Fiat tips into a curve, takes a set, and zings happily out the other side. One upside to the mellow suspension? Dive deep into corners, and it’s easy to coax saucy little slides out of the Fiat, but at relatively low speeds that don’t threaten life or limb. On a wooded road whose location shall remain nameless, I take to drifting the Fiat sideways and reeling it back in. You may have heard the theory that “It’s better to drive a slow car fast than a fast car slow.” That rubric neglects to consider the joy of driving a fast car fast, but there’s truth in it. The Fiat tickles roads that I terrorized in the Ferrari just hours before. Its skinny tires squeal on curves that leave the Ferrari bored, or tempt me to take unnecessary risks to mainline its manlier drugs. It’s a different kind of fun than the $390,000 Ferrari. But it's still fun, and for less money than a loaded Toyota Camry.

If you do prefer your Fiat pasta more al dente, dial up Abarth. That model will offer not only the stick shift that’s a gotta-have for many roadster buyers, but optional Brembo front discs for $1,495; four more horsepower and a rortier exhaust; stiffer Bilstein dampers and anti-roll bars; and a critical limited-slip differential to help the Fiat scoot out of corners with more traction and poise.

Brett Berk has posited that the Miata and Fiat, for all their similarities, are different cars for different people. I get what he's saying, but "wildly different"? Nuh uh. The universe of buyers for tiny, lightly powered roadsters is already so small as to fit on the head of a pin. Those buyers now have two choices in affordable roadsters, cars that are far more similar than different. (The Fiat, as Berk correctly argues, might actually be more different to create a clearer, more-distinct alternative). As one of those roadster fans, I like both cars, so I imagine other people may feel the same. So as an inveterate advice-giver, I’d recommend that prospects test drive both the Fiat and Mazda, if only to confirm your initial hunch. In the space of 20 minutes, you’ll avoid second-guessing or sleepless nights.

I’ll await a clutch-pumping test of the 124 Spider Abarth before passing final judgment. For now, the Miata still paints a permanent grin on my face. The Fiat, more of a smirk.

Literally. That is literally the crux of Fiat’s new commercial.

Fiat 124 Spider Is Gunning For The Miata and Ford May Have a New Mustang: The Evening Rush

Plus, a rambler from Yeti and tasty pints from Modern Times Beer