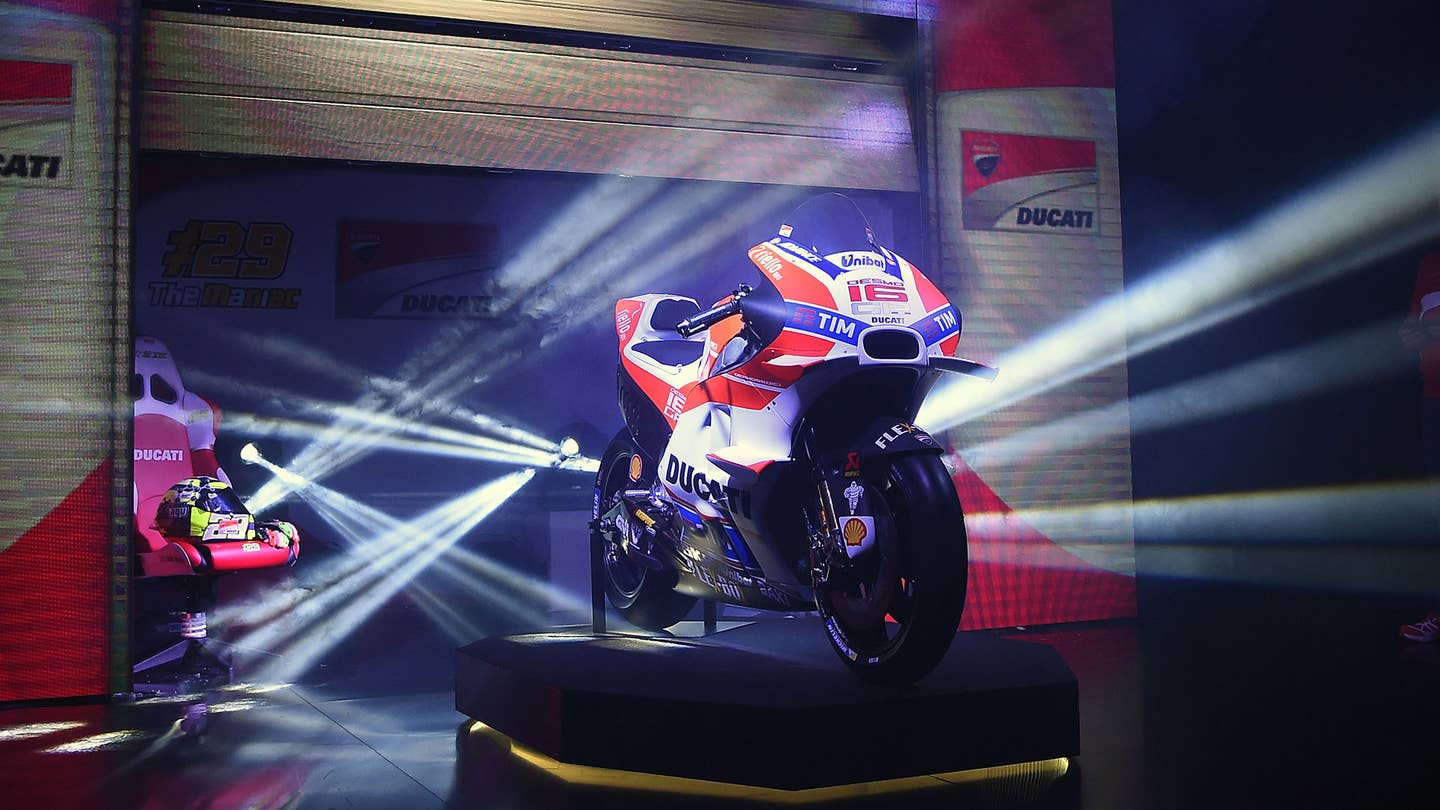 The 2016 MotoGP season starts March 20 in Qatar, and Ducati has just taken the wraps off its new race bike, the Desmosedici GP.  In typical fashion, finer details about this race steed are a close-kept secret in Bologna’s Borgo Panigale. Here’s what we know about the machine, which will be raced by the two Andreas: Iannone and Dovizioso:

The new Desmosedici GP weighs 346.1 lb., and will once again be powered by a liquid-cooled 1,000cc V-4 with four valves per cylinder and four throttle bodies, with fuel injectors mounted above and below the butterfly valves. Claimed output is “over 245 horsepower,” and top speed is listed as “over 211 mph,” which comes as no surprise given that most MotoGP bikes exceed that each year on the back straight at Austin’s Circuit of The Americas.

Other details: The Desmosedici GP has a seamless transmission, whose perfectly smooth downshifts make corner entry simpler, predictable and more consistent, thereby saving gobs of time over the length of a race. Carbon Brembo discs, 320mm in in diameter, scrub most of the speed, while a single stainless steel rotor is there for those rare occasions when the Ducati’s rear wheel is still on the ground during braking. As for the Desmosedici frame, it’s an aluminum twin-spar design carrying Öhlins suspension front and rear.

How Ducati adapts to these changes, particularly the tires, will be seen at Qatar. Dovizioso, though, is positive: “In our first two tests, we rode a lot to adapt to the new tires. But the feeling in the last test improved a lot, so I’m really confident for the 2016 season.”

Meantime, what do those four large downforce-producing wings on the front bodywork of the Desmosedici GP tell us? Two possibilities. Ducati once again has plenty of power and straightaway speeds won’t be a problem. Or it might be that big wings just look cool, especially on new race bikes being unveiled to the public. As often is the case, the truth likely lies somewhere in between.