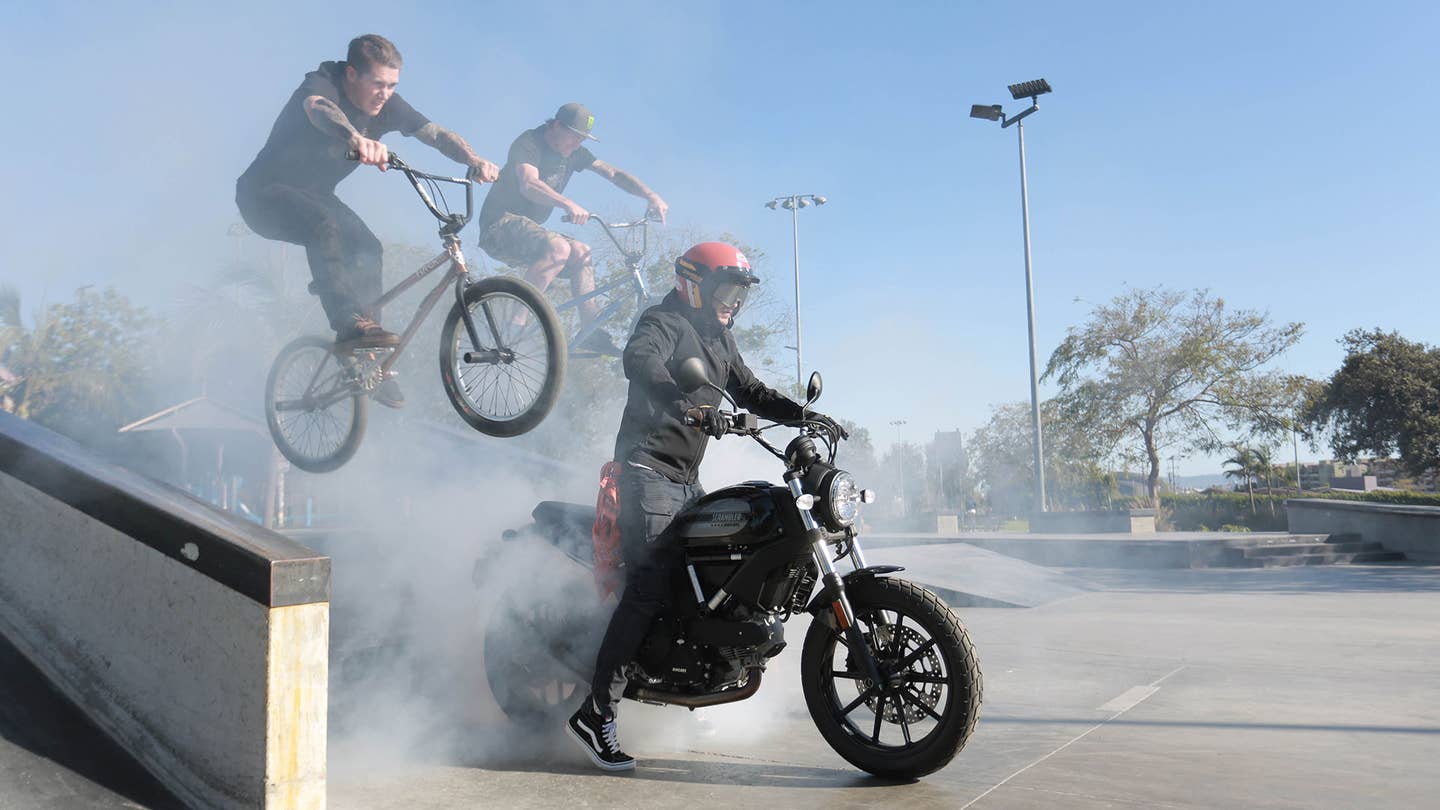 According to whichever New York marketing agency Ducati hired to launch its Scrambler brand, if you are considering said motorcycle it follows that you are a young man of exacting taste. You spend weekends riding across sweeping Baja dunes, gritting your teeth against the sand, while by night you sip craft bourbon at a crackling campfire as a voluptuous female silhouette bends over in the distance.

You favor buffalo plaid, fulsome facial hair experiments, and meticulously frayed designer jeans. Your eclectic—but well-considered!—tattoo collection would certainly be endorsed as a "DO" by VICE magazine. Your life, in other words, is one long Steve McQueen reverie as seen through vintage-inspired Warby Parker goggles; you have achieved Silver Lake Nirvana.

But here's the thing: despite the image Ducati desperately wants to sell you, a motorcycle is not some sort of antidote for disintegrating self-identity, or a panacea for the doldrums of cubicle living. A motorcycle is a machine—one of the purest, most utilitarian machines left on the modern market, second only to a chainsaw, or maybe a nail gun.

Sure, all marketing is based on the appropriation of identity, but Ducati doesn’t have to lean so heavily on those wispy illusions when promoting their new Scrambler Sixty2. Especially because the Sixty2 happens to be so damn good.

Ducati’s Scrambler, which they debuted not just as a motorcycle but as a standalone sub-brand last year, was constructed with the focused goal of adding an entirely new demographic to their sales. Ducati is mostly known for exceptional Italian-built steeds of pure speed and mouthwatering design; its halo Panigale superbike is a 200-mph, petrol-fueled sculpture, with the sort of Bologna-bred beauty that makes grown men teary-eyed and weak in the knees. But the company needed a motorcycle that could usher in a new age of Ducatisti, a bike that riders just getting into the two-wheeled lifestyle could embrace without fear of squandering their mortgage. By all measures, and as one of the most highly-lauded motorcycles of 2015, the Scrambler Icon achieved this very goal.

For 2016, Ducati introduced the Scrambler Sixty2. They modified the 800cc motor in last year’s Icon model down to 400cc, decreasing not only displacement but also horsepower and torque (to 41 hp and 25.3 lb-ft, down from 75 hp and 50 lb-ft). While the idea of decreasing power would be anathema to most skilled enthusiasts, the goal was to create a motorcycle that didn’t frighten first-time riders.

The result is a superb beginner’s bike, silky smooth on throttle and absent of lurches (unlike the Icon, which could be a bit squirrely from a standstill). With a 31-inch seat height, even the vertically challenged can fearlessly throw a leg over. It's also light, and the riding position and high handlebars make the Sixty2 surprisingly comfortable and easy to maneuver. Plus, all of these attributes are wrapped in one of the best visual packages around.

Beginner bikes typically resemble ill-formed toys, with tiny engines loosely hanging on unattractive frames. But the Sixty2 looks like a full-grown motorcycle, partly because, size-wise, the Sixty2 has the same engine as the Icon. There’s a steel-trellis swingarm, Showa forks, LED lights all around, a teardrop gas tank, blacked-out silencers, LCD instruments, and knobby Pirelli tires. Don’t forget the Brembo brakes up front with ABS to keep you safe—a segment-exclusive technology that should be standard for beginners. The overall aesthetic is clean, minimal, throwback: a bike for noobs that will actually compliment your style. Some may think that doesn’t matter. Fair enough. But for those who care about their image, visual and otherwise, the Sixty2 succeeds.

That’s where Ducati lost its way in marketing the bike. It’s one thing to care about how you dress or to have an opinion on Bell & Ross watches versus Shinola; it's another thing entirely to dummy down a motorcycle into a designer handbag for men (or women, for that matter, given the handful of female journos at the launch).

There’s a point in the promo video where—and this is not a joke—a young girl sits in the lotus position in front of a Sixty2 while BMX bikes and skateboarders kickflip over them. It's the type of marketing bullshit where, were you unfortunate enough to find yourself in that meeting when the idea was first suggested, you just might have spit up your coffee. Either that or you would have proposed with a straight face that organic beard oil should be a shibboleth of the brand. Or maybe a Drake-approved app where you can learn to chicken dance.

This hipster association may actually scare off new riders—or, worse, turn them off entirely. You don't want potential new customers wondering if they're the right kind of cool enough to pull off your entry-level bike—if the Williamsburg denizens will mock them if they're not sporting sleeves of pirate ship/sparrow/script ink.

Of course, Ducati is not alone in the meticulous and high-polish manufacturing of adventure. Buy a Breitling and you, too, will fly jet fighters screaming across the big blue! Sign that F-Type lease and your life will soon resemble that of Ernst Stavro Blofeld! This is the promise. Take the red pill.

But there’s something particularly nauseating about how Ducati has chosen to disseminate its Scrambler sub-brand. It's one thing to associate your product with Scott Carpenter because he wore it to space, as Breitling did; it’s another strata of artificial sweetener entirely to declare that your product was based around five cultural touchstones—and one of those is “street food.” I'm not making that up.

Look, I can agree that, in the Venn diagram of life, skateboarding largely overlaps with motorbikes. But fucking street food? Sorry marketers: Scramblers don’t overlap with street food. You know what does? Irritable bowels.