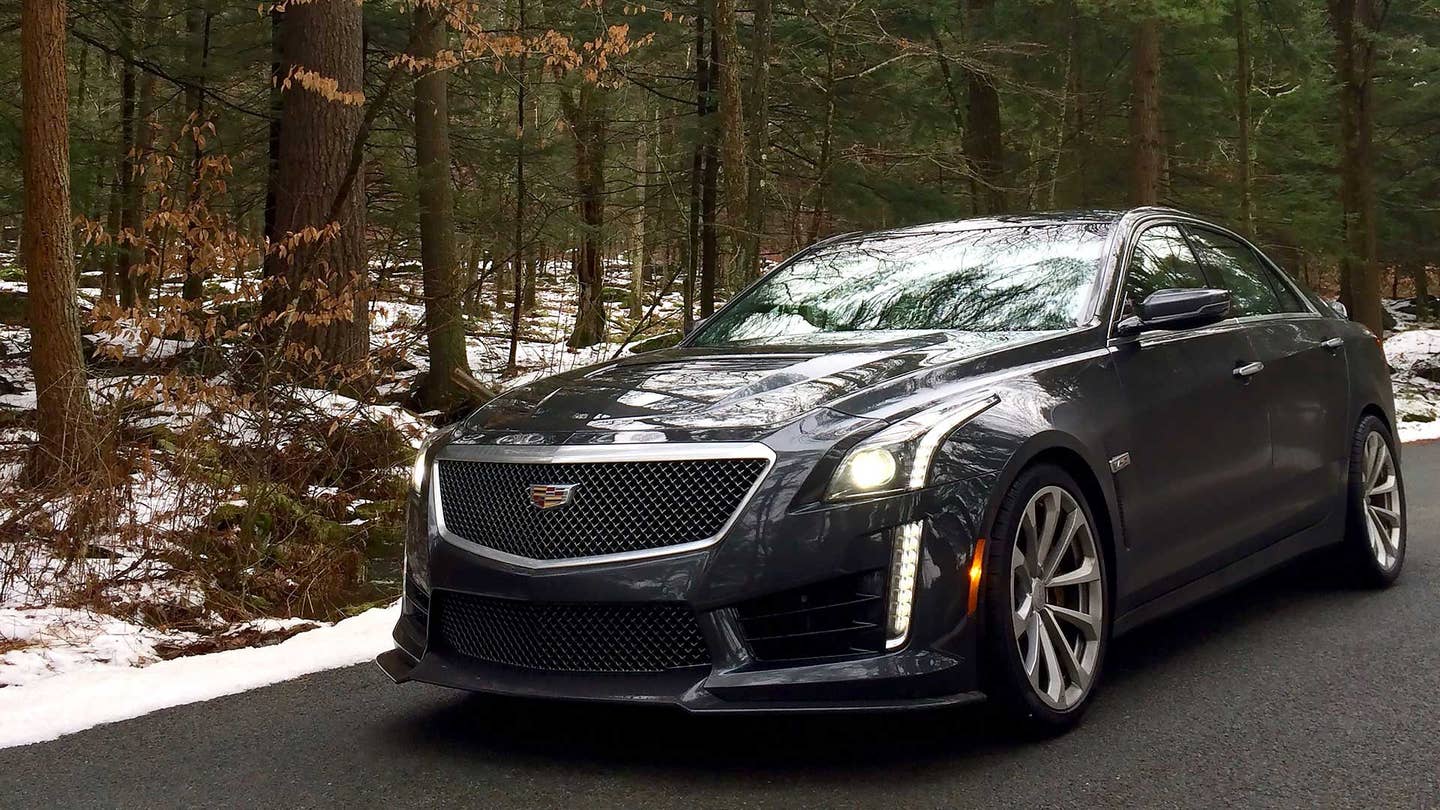 Though its profits are concentrated in an audacious, blinged-out, $80,000 luxury SUV, for the better part of this century—maybe longer (maybe way longer)—General Motors’ Cadillac division was chasing German sport sedans. Why? So far as we can tell, the impulse is grounded in a blend of patriotism, protraction and prestige. If Detroit’s best can go head-to-head with Europe’s best in their area of core competency, the rest of GM’s vehicles—by extension—must be worth considering across the board.

It may be a risky play, but it also may be the only valid one for long-term longevity, especially if the other option is whatever it is that Lincoln is (or, isn’t) doing. It has also jackpotted for enthusiasts in the form of the current-generation ATS and CTS, cars that abrogate—at least in their dynamics and exterior styling—the branding superlatives offered up by BMW (The Ultimate Driving Machine) and Mercedes-Benz (The Best or Nothing).

To compete fully, however, Cadillac needs a super-elite class of vehicles to soar above these ordinary luxury sedans. BMW and Mercedes go Skull and Bones (er, Totenkopf) on their run-of-mill 3s and 5s, and Cs and Es with their M and AMG sub-brands. Seeking unclaimed alphanumeric nomenclature options, Caddy calls its tuner shop “V.” And the only two current vehicles to affix this suffix are the ATS-V and CTS-V.

How do they stack up to the competition, and to each other? Two of The Drive’s staffers, editor Mike Guy and writer-at-large Brett Berk, put the cars to their paces during the New Year’s holiday. Here’s what they have to say.

I am not a glutton.

Don’t get me wrong, I enjoy an occasional dip into excess. But I generally have enough forethought, and executive function, to steer clear of falling into some infernal, unfulfillable quagmire. To wit: I am famous among my peer group for once removing the tray of pot and mushroom-laced brownies from a small but raucous weekend get-together not because participants had blasted off the rails, but because I could see they were over the crest of the laid tracks and still picking up speed. There are occasions when more fuel is neither necessary nor advisable.

The CTS-V is a glutton. A BMW M5 or Mercedes E63 under full rocket throttle on smooth, straight pavement does not, would dare not, careen like an endorphinated rhino, causing its driver to question whether the front tires were still connected to the ground, or somehow, magically, being torque-steered like a Lancia Thema 8.32. I would not, I don’t believe, get helplessly stuck in a quarter inch of snow, on a flat surface, while shod with winter performance tires.

The CTS-V is as fast as greased fuck. It’s handsome, desirable and well kitted out. The chassis, when driven at 7/10ths or less, is as planted and imperturbable as a mid-winter cave of hibernating bears. I’m even almost warming, Stockholm Syndrome-like, to Cue, the hectic/haptic Caddy infotainment interface.

But this is not some vinyl-lined muscle sled, a Charger Hellcat with chrome. It’s an $83,000 luxury sedan. It may be sacrilege to say this in a country founded on the aroma of insatiability, but in this league, and at this price point, I don’t think buyers are looking for a break-loose experience. The CTS-V is the most car for the money, providing 50 more horsepower at lower weight, and still undercutting its competitors by $10,000 to $20,000. But the mathematics of performance sedans—like the mathematics of every car category—is neither linear nor summative. The CTS-V needs to adjust its calculus.—Brett Berk, writer-at-large

Early one rain-slashed winter morning in Brooklyn, I was sipping a to-go cappuccino from Gimme! while motoring slowly past the Metropolitan Detention Center in a black 2016 Cadillac ATS-V. I rolled up to an assortment of SUVs and Ubers idling in the downpour and clusters of people huddled under umbrellas, and slowed to a stop. Nothing grabs a guy’s attention like a crowd gathered in the rain at the gates of a federal prison.

Then a door in the high wall opened and five big dudes wearing identical sweatshirts and khaki pants walked out. It was release day at the MDC. The ex-cons hopscotched the puddles of Second Avenue, and embraced their families.

One of them walked past me and nodded. I opened my window to say hi, or congratulations, and he leaned down, looked in the car approvingly, and said, in the tone of someone admiring something that’s come a long way: “Man, this is a Caddy?”

Yeah, it’s a Caddy. Some love it and others hate it (I’ve done both, though I’m now much closer to the love side of the equation), but few people who give a damn about cars react with indifference. I think the ATS-V, the little fighting tiger of the confused Cadillac family, is one of the finest American cars made. And that’s saying a lot, because I’ve been a Caddy hater for a long, long time.

These are the things that I’ve hated about Cadillacs for a long, long time: The design. The interior. The design. The insecure attention paid to seeing and raising BMW on every hand. Over the past 10 years, the design language, which I’ve always felt is crude and blocky and indicative of an object that weighs a lot, has somehow become lighter. The revised hood has a supple new arc and the edges of the grille have softened. The grunting aggression is almost eliminated from the silhouette. In its place: something that actually looks fast.

And that engine. There are some smart people who hate the very idea of a V6 in a performance-line Cadillac. The twin-turbo six I drove is SAE-certified at 464 horsepower and plenty of torque on top of that has a touch of low-rev lag, but seems to really enjoy a wide-open throttle. When I executed a midnight bombing run along the Brooklyn-Queens Expressway, the four-trumpet exhaust roared in ways that made it feel almost like a V8.

The six-speed manual shifter has a handy Active Rev Match. At 3,700 lbs, the chassis is stout yet compact enough to bash around a racetrack (a Cadillac? Really?). There’s even a Performance Data Recorder so you can compare numbers with your track-day bros.

This is a great car: athletic, fun, proud, lithe and—dare I say it about a Cadillac?—sexy. You could reach back and shell out another $20,000 for the CTS-V and it’s honking 6.2-liter V8, but it feels like overkill. The ATS-V is hitting 60 mph from a standstill in under four seconds, and there’s nothing wrong with that.

Here’s why Cadillac is weird: This is a great car, but why would I buy it (for an immodest $61,000) instead of a BMW M3 (for $64,500)? The interior is as junky as ever. I grew up in Chevys, and even owned a succession of early- to mid-Eighties Celebrities. The exact same cruise control stem used on those Celebrities is now adapted as the windshield wiper control. How deep can that particular parts bin be? But if Cadillac is serious about going after the boys in Munich, they need to start paying closer attention to details.—Mike Guy, editor