Watching the Wrecking Crew Wreck Crews, and Throwing a Leg Over Indian’s RSD Hooligan Scout at the OKC Mile 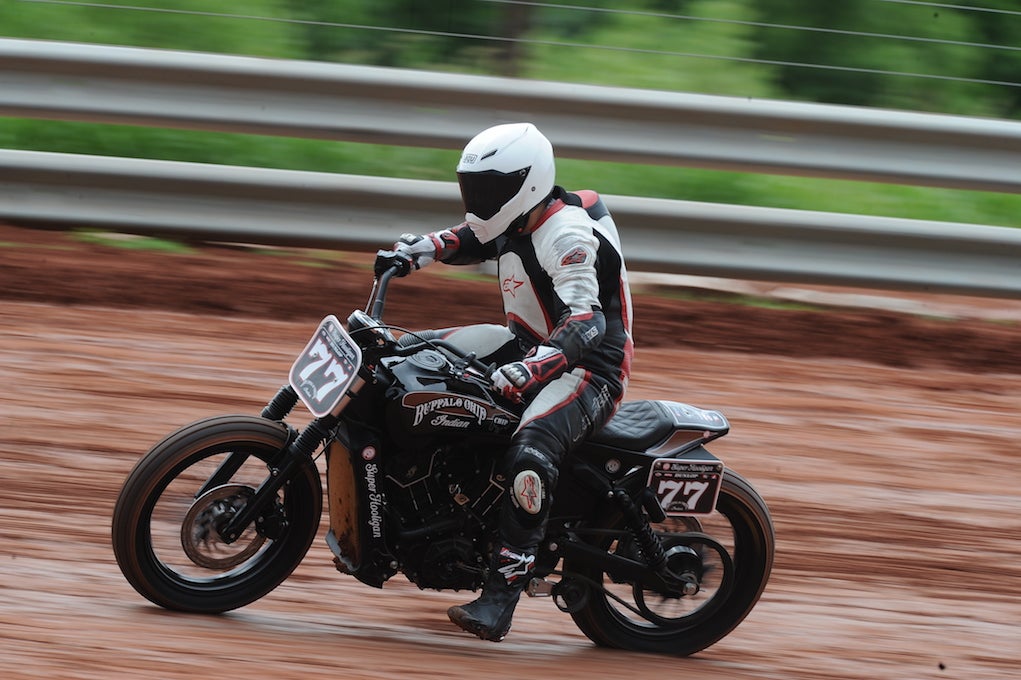 A few weeks back, Indian Motorcycle hosted a press event at the American Flat Track OKC Mile round. We had the opportunity to spend time with their awesomely named race team, The Wrecking Crew—comprised of Bryan Smith, Brad Baker, and Jared Mees—and were able to experience the awesome, race-ready Indian FTR750 and Roland Sands Design Hooligan Scout firsthand. After a jam-packed weekend I can confidently say: the café racer trend is dead. LONG LIVE THE FLAT TRACKER!

(A caveat: I am a sportbike rider and MotoGP fan but came in knowing almost nothing about flat track and was not hugely familiar with Indian Motorcycle. Basically, I knew that both were very American, and both had been around for a long time.)

Over the weekend, I learned that Indian Motorcycle stepped back on stage in 2013, and since then every model released and decision made pays respect to the over 100-year history of the company. Their dominance in the American Flat Track Championship is a large hat-tip to their racing heritage. If the FTR750 and the RSD Hooligan Scout are any indication of what’s ahead, let me know where I can put down a deposit.

We spent the first evening at Indian Motorcycle of Oklahoma City dealership. They were having a rider event with a live band and BBQ. Riders came from all over. This was the Indian I expected: Wall-to-wall cruisers with familiar heritage model names (Chief, Scout) and a group of older riders. It was a great introduction to the company, and the loyalty surrounding it. Merchandise was flying off the shelf, conversations about the bikes happened in every corner. Everyone was genuinely thrilled to have Indian Motorcycle's Wrecking Crew team there, as well. It surprised me how much the owners could get behind a team riding bikes that look nothing like the ones they own. As it turned out, all that mattered was the Indian Motorcycle badge.

We got to Remington Park early in the afternoon, and the heat was already unbearable. The place was packed nonetheless—in fact, it was sold out. Looking around, you quickly realized this was a family event, with activities that had nothing to do with watching the race. There was a play area, an assortment of food trucks, music, intermission entertainment much like a baseball game, and, for a few hours, the pits were open to the fans. Fans can meet the riders, all of whom are more than happy to sign a poster or take a picture.

Walking in the pits I saw a range of setups. On one end were privateers with pits that consisted of, basically, a chair, a toolbox, and a motorcycle. On the other end were the factory teams with full setup: six-figure trailers, a full crew of mechanics, and purpose-built race bikes. No surprise, Indian Motorcycle had the latter.

The brand has fully committed to the series, and to reclaiming its dominant racing heritage. I asked them why it was such a priority; the answer back from Indian, essentially, was: Why not? After all, it was two racers, George Hendee and Oscar Hedstrom, who founded the company. In some ways, Indian is simply making good on a promise to live up to its founders.

The crown jewel of the Indian Motorcycle pit was the FTR750, a classically styled carbon fiber race bike. Plenty of teams would take an existing platform, then improve on it for track use. Indian, on the other hand, developed this race bike from the ground up—and did so on ridiculous timeline.

Indian made the announcement that they were going flat track racing back in September of 2015. They first raced the bike in March 2017 during the opening race of the first American Flat Track season. That same night, the company got its first, and second, podium when Wrecking Crew members Jared Mees and Bryan Smith took first and second.

This is essentially unheard of in motorsport. Teams new to the grid usually spend the first few seasons in development, maybe with the goal of finishing in the top 10. To put this into perspective, imagine wanting to go to outer space with the goal of, maybe, getting into orbit; you build your own rocket ship, but on your very first launch you end up on Mars.

That wasn’t a one-off, either. The Wrecking Crew has lived up to its name by absolutely dominating the series. Mees and Smith are first and second in the championship standings, respectively; Brad Baker is in third. They wrecked the races at the OKC Mile, as well, with a full podium sweep: Mees, 1; Baker, 2; Smith, 3.

Again, the Wrecking Crew couldn't be a more apt name.

We got to Red Dirt Raceway later than originally planned, because the track needed tending. Overnight, the heat broke and the skies opened. When we showed up, the dirt was more like slick clay. But the less-than-stellar conditions didn’t take away from the two Roland Sands Design Hooligan Scouts waiting for us—in fact, the mud and the gloom seemed to fit this tough-looking bike perfectly. As soon as I saw them, I thought one word: “mean.” The Hooligans look like the motorcycle version of a bar fight, and I couldn’t help but stare. I appreciate all bikes, but everything I’ve owned has been on the sportier and more modern side of the spectrum. The RSD Hooligan Scout was making me question everything; the vintage looks coupled with comfortable ergonomics made me want one as a street bike.

In fact, I started pricing out how to own one on my flight home. Basically, the bike is an Indian Scout with a Roland Sands Design Kit. It’s a fairly straightforward way to achieve such a high level of badass. These are meant to be involved in hooligan races, but I think we're going to see these roaming the streets more regularly. (Granted, those versions should have lights and probably a front brake to make them at least street-legal.)

For me, vintage cool was always a café racer.  Not anymore. With Indian in the lead, I'll say it again: the café racer trend is dead. LONG LIVE THE FLAT TRACKER!

Indian gave me the chance to ride these bikes around the flat track—something I've never done before, even though I regularly do track days on my sport bike and ride trails on dirt bikes. But I never thought about mashing those two together. I asked around for some advice. The answer that I took to heart was this: you have no front brake; don’t touch the rear the brake; roll on to go and roll off to slow down.

It was fun, but it was not easy. The slick mud didn’t help. I have even more respect for The Wrecking Crew—and everyone else on the grid Saturday night.

This photo is of Jared Mees who took 1st at the OKC Mile. A great example—in fact, the highest-level example—of how you ride one of these bikes: