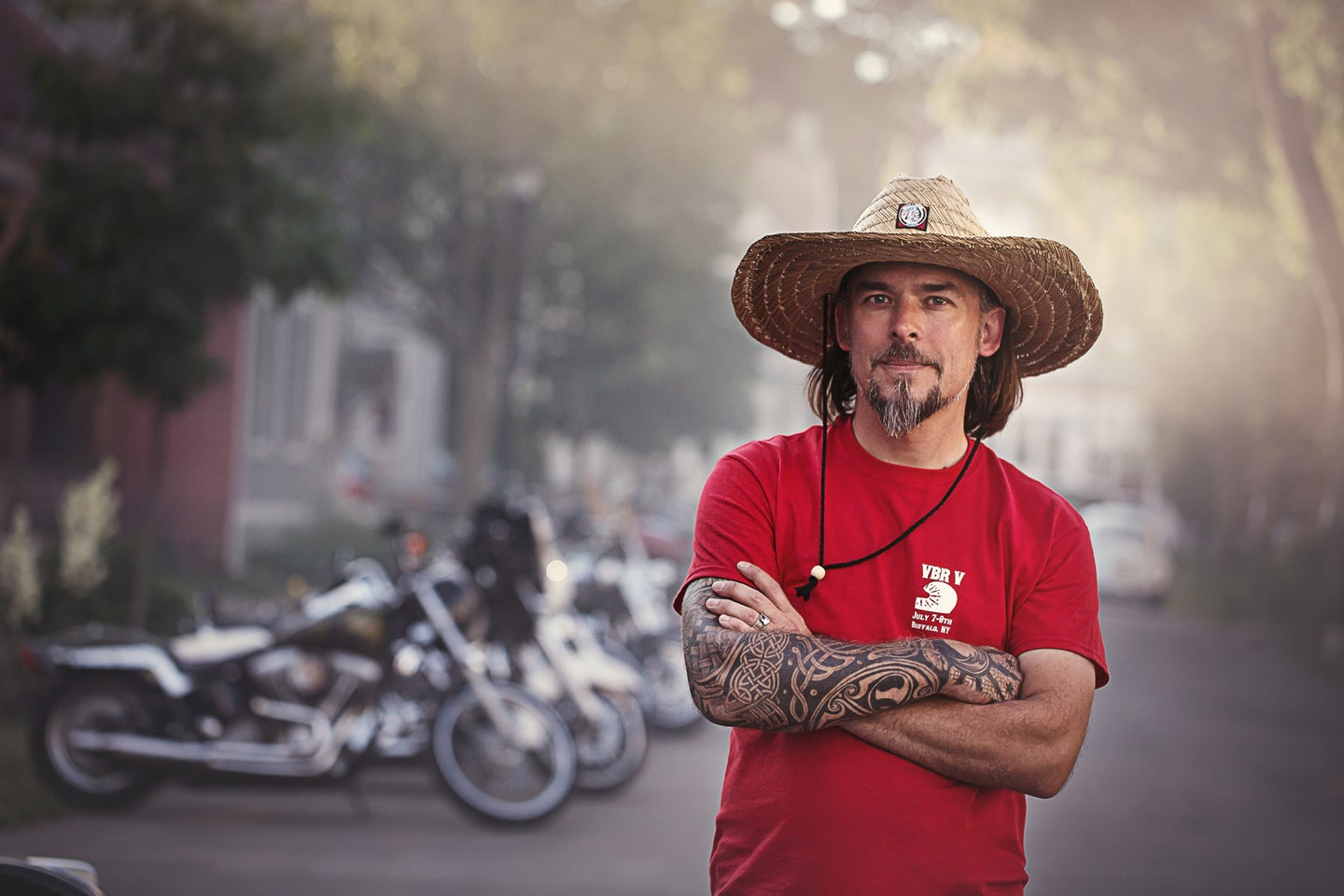 Buffalo, New York-based artist Christopher Galley has established himself within today’s national motorcycle culture with a select group of other artists, who in very different ways from each other have created motorcycle aesthetics with wide appeal to enthusiasts. While some of these artists paint representational scenes of motorcycles and people who ride, Galley, at his Devil Chicken Designs, creates paintings and mixed media artworks that reference and reinterpret iconic images of bikes and biker culture, and the dangers and risks of the racing and riding lifestyles.

According to Galley’s artist’s statement, the working-class, blue-collar culture of Buffalo is a prime influence of his work. Also, as a youth, Galley became fascinated with the images of Evel Knievel and Steve McQueen, and the biker-cool of their daredevil, risk-taking lifestyles. Adding to that was his family moving to a small town outside of Pittsburg, Pennsylvania, where a few blocks from his home was the graveyard featured in the classic horror film, Night of the Living Dead. Suddenly Galley was living within the setting of a fictional film of horror.

“Six or seven years ago I decided to take my work in a new direction," Galley said about his art. "I was ready to scrap my older work and focus on some new techniques, new media, and styles that I wanted to learn. I was going to focus on all of the things I thought were cool. I didn't care if anyone liked it. I was making it for me. I think that attitude resonated with people in the bike scene. They dug that I was putting out imagery that spoke to their culture and what we all dug growing up.”

Galley’s relationship to motorcycles began at a young age.

“I grew up around motorcycles. It wasn't a family tradition, but one of my earliest memories was riding on the tank of my dad's Husqvarna dirt bike, as he ripped it up and down the street," he said. "There were also family friends who were bikers, so it always felt comfortable. When I started to get my artwork out to the public, bike shows seemed like a natural fit. That core of creativity is what drives both of them. It puts everyone on a common ground.”

“Motorcycle culture seems to be in a really good place now. There are a lot of good people putting together bikes, artwork and shows right now. Every once in a while I wonder when it's going to all come to an end, but then I'll get an opportunity to talk to someone who was around in the ‘60s.  It's reassuring to hear them compare then to today. I feel very fortunate to be a part of everything going on now.”