Precision art with the bravado of a vintage motorcycle. 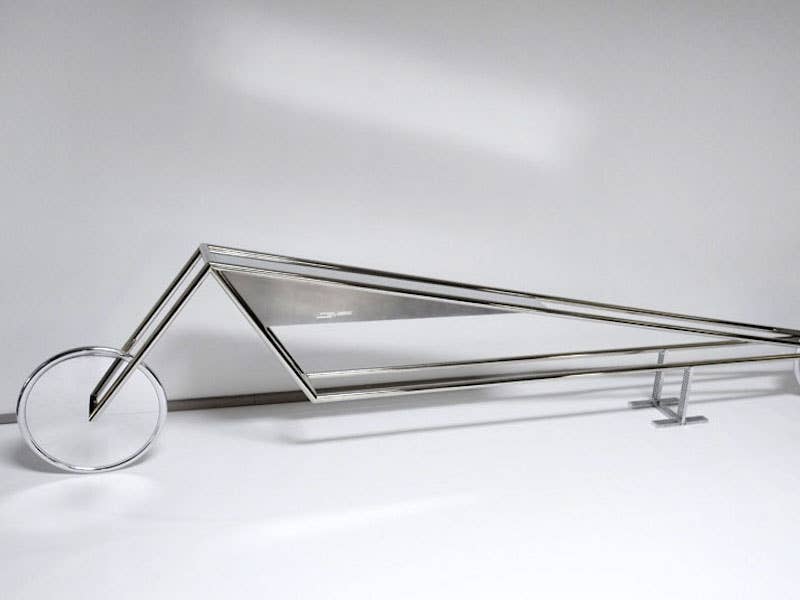 Every so often, you encounter an awesome resume like that of Gianni Piacentino: Now an established advocate and producer of Italian minimalist sculpture, he was once a sidecar racer. For those unfamiliar with sidecar racing, it is an insane and terrifying two-man motorsport in which one person steers, while another pitches and leans wildly in an attached sidecar to aid the cycle’s weight distribution and lean. Should we all have such range, from noses rubbing the pavement at 85 mph to carving blocks of alloys on a lathe—from living speed to rendering it.

And you can tell the man likes velocity. These are the photos from Piacentino’s new exhibition at Fondazione Prada. Each sculpture operates in that sexy space between art and machinery: stripped-down, polished-up components that evoke function—wheels and props and axles—while melting down to pure form. Piacentino’s silhouettes suggest mass-production and usefulness, drawing the eye like classic cars or WWII fighter planes. But the ultimate magic comes from craftsmanship and singularity. The experience involves a set-up and a punchline; it’s a beautiful, visual joke. It takes an ex-racer to produce art with a machine’s bravado and sculpture with factory precision.

If you find yourself in Milan, the exhibit is up through January.