Let’s Find Out if GearWrench’s Socket Set Is Truly Among the Best: Review

Maybe you should overhaul your arsenal with GearWrench tools.

Becoming known as a brand that offers professional-quality tools at affordable prices, GearWrench has been increasing in popularity in recent years. It should give hobbyists the chance to get their hands on above-average tools without skipping a mortgage payment. There’s even talk amongst some professionals I know about integrating these tools into their work loadouts.

My own experience with the company’s tools has left me with a bit of bias in its favor, as a set of its ratcheting-combination wrenches has been at my disposal for quite some time now. Despite being subjected to all kinds of cruel and unusual punishment, I have yet to see any fail, and I actually keep a set in the trunk of my car because I know I can rely on them.

That said, I've been waiting years for the opportunity to find out if it's worth the expense of upgrading my entire setup, and thankfully, that day has finally arrived. Today, The Drive is putting the GearWrench 68-piece Tool Set to the test. We're taking a close look at what these tools bring to the table, and we’ll give you the answer to the same question that's been on my mind for quite some time.

Getting my hands on the GearWrench tool set was better than Christmas morning. I was so eager to tear into it that I almost forgot to look over the packaging. Once I heard contents rattling around inside the box, however, I decided it’s probably best to slow my roll.

It’s a little more expensive than other sets targeting the DIY crowd, but the packaging is pretty standard, with a cardboard sleeve enveloping the blow-molded case. The plastic case appears to be a cut above the rest on the surface, but it’s just another horror to watch out for. My particular set came pre-jumbled — almost like they know how much I love jigsaw puzzles. After putting each piece back into its respective spot, I did notice some characteristics that separate this kit from many others.

One thing that immediately jumped out at me was the thin profile of the ratchet heads. These ratchets are a lot less chunky than what I’m used to. GearWrench has also done away with a quick-release mechanism. That, paired with the 90-tooth count, will make this tool more than enjoyable to use in tight spaces.

While that’s generally enough to win me over, GearWrench didn’t call it quits there. Each socket features large sizing stamped into the side to keep you from having to squint at the numbers. Each metric socket features knurling along the bottom, and the SAE sockets have two stripes that run along the base. That feature helps you quickly determine if you’re at least in the right neighborhood when tackling hardware — or sorting through scattered sockets upon opening.

You get 35 SAE sockets and 27 metric sockets, making for a grand total of 62 sockets. While that is an adequate amount for many domestic applications, the lack of 3/8-inch-drive metric deep-well sockets will be an issue for many. IThere are no specific spark-plug sockets, although the deep well 5/8-inch and 13/16-inch sockets should work just fine.

As much as I love looking at tools, it wasn’t long before I went to work with this set. I hear that’s the best way for us to learn anything about it.

Getting After It With the Gearwrench Set

Given the patience I’ve shown in waiting to take the GearWrench tools for a test run, it was only right to use them for a job I’ve been waiting just as long to do: the rear sway bar for my 1969 Dodge Charger project car. I haven’t been putting it off for any reason other than more pressing jobs constantly popping up, as they do with a project car that’s driven regularly.

I still needed a drill and some combination wrenches, so I didn’t solely rely on GearWrench’s set. I did use my GearWrench ratcheting box wrenches to at least try and keep things consistent. GearWrench’s ratchets and sockets lived up to my expectations. Just like my other GearWrench-branded equipment, they functioned beautifully and broke out some pretty neat tricks.

Unlike most ratchets with a 72-tooth mechanism, the choppers on these bad boys have a total of 90 pearly whites. They really came in handy in those awkward angles working under the car. Despite having finer teeth than most, I didn’t deal with any skipping when laying down a little extra torque on the hardware. As for the sockets, it was easy enough to sort through sizes, although they would probably benefit from a little less chrome or more pronounced stamping.

The only complaint I really have has to do with the case: It flat-out sucks. There’s no carry handle, and the contents are sitting loosely in their dedicated places. To prevent scattering, you need to carry the case like a lunch tray, which is a major pain if you need to transport other gear to a project.

Our examination of the tools didn’t end with putting them to work. We needed to look inside and see how GearWrench’s internals stack up against the others we’ve seen. Luckily, it is a big step up from what some of the more affordable brands have to offer, even if it isn’t perfect.

GearWrench uses a single-pawl mechanism, but unlike Stanley or Craftsman, the pin the pawl rides on isn’t a thin piece of steel that’s likely to dislodge if the spring beneath it fails. This isn’t the most robust piece of material, however, so I can’t recommend it to anyone in a heavy-duty line of work. There was also a considerable amount of dirt inside after a single job, so expect to clean and oil these tools more frequently than others.

After my time with these tools, I can say that the GearWrench ratchets are hard to beat. I know, installing a rear sway bar isn’t as strenuous on the tools as an engine swap or clutch replacement. The tight swing arc, slim profile, and overall feel of the tools kept things moving along as smoothly as possible. These factors, paired with a better internal design, just might sway many tool owners to switch teams.

You get the sense that you’re working with a set of quality tools, as long as you stay away from that case. I questioned the 90-tooth mechanism to begin with, thinking that skipping teeth would be unavoidable, but that didn’t happen. While I didn’t need to apply earth-shattering torque levels, I did go to town on some of the mounting hardware and didn’t feel as much as a hiccup in the system.

This set is a perfect match for the application. Even if I only needed the 3/8-inch ratchet and 9/16-inch sockets for this specific task, it does offer all the sizes I’d need to work on virtually any other part of the car. Anyone with an older domestic application would benefit from having this kit on hand.

Just because I came into this wanting to like this set doesn’t mean I think it’s perfect. For starters, metric fasteners are limited, meaning it’s a poor choice for modern applications. Almost all vehicles feature metric hardware these days, and that means this set is limited from the get-go. You’ll likely need to go with a smaller metric-only kit or cough up the cash for a larger, more inclusive tool set.

Not only that, but this case sucks. I can’t say that enough. Unless you keep it on its side at all times, the contents are going to scatter, and that limits the number of places you can store it. Considering some much more inexpensive sets, such as DeWalt, offer far better cases, I feel like the customers are getting burned here.

I like the internal design of these ratchets, but I’d like to see something in place to keep dirt and debris out. I know that cleaning your tools is essential, but it is easy to forget, and that can quickly lead to the failure of this setup. The simple but robust housing configuration that can help reduce alignment issues also makes the ratchets somewhat difficult to reassemble. I can see many people skipping maintenance because of it, ultimately creating a somewhat unpleasant experience for owners.

Our Verdict On GearWrench’s Tool Set

Hand on heart, I can’t say that everyone should go out and buy GearWrench’s tools. No matter how much I like them, they aren’t for every DIY mechanic. Seeing these are nearly double the price of many other affordable tools, there are plenty of people who will want to save a few dollars, and that’s totally fine.

Professionals and folks working with heavy-duty applications will likely want something beefier and with a better seal on the soft stuff, too.

This GearWrench set is one of the best choices outside of premium brands. It’s a solid performer, the internal design is a big step up from some of the others I’ve seen, and the overall quality is above average — except that stupid case.

Q. How do I claim my GearWrench warranty?

A. You can either claim your warranty over the phone or possibly have your GearWrench tools replaced by retailers that carry its tools. Fastenal, Lowes, and Home Depot are likely your best bets. GearWrench also has mobile tool trucks in some areas, and those might be the best route if they run in your area.

Q. Are GearWrench tools made in the United States?

A. No. It would appear that the majority of production takes place in Taiwan. Unfortunately, that just seems to be what we should expect from most brands that target the DIY crowd, as seemingly all American-owned companies in this category do the same.

Q. Is a higher tooth count better on a ratchet?

A. For the most part, it is. Having more teeth allows for a tighter swing arc since less movement is necessary for the teeth to engage the pawl. On some units, finer teeth may be a compromise to integrity, which is ultimately why lower tooth counts are generally favorable for heavy-duty applications. 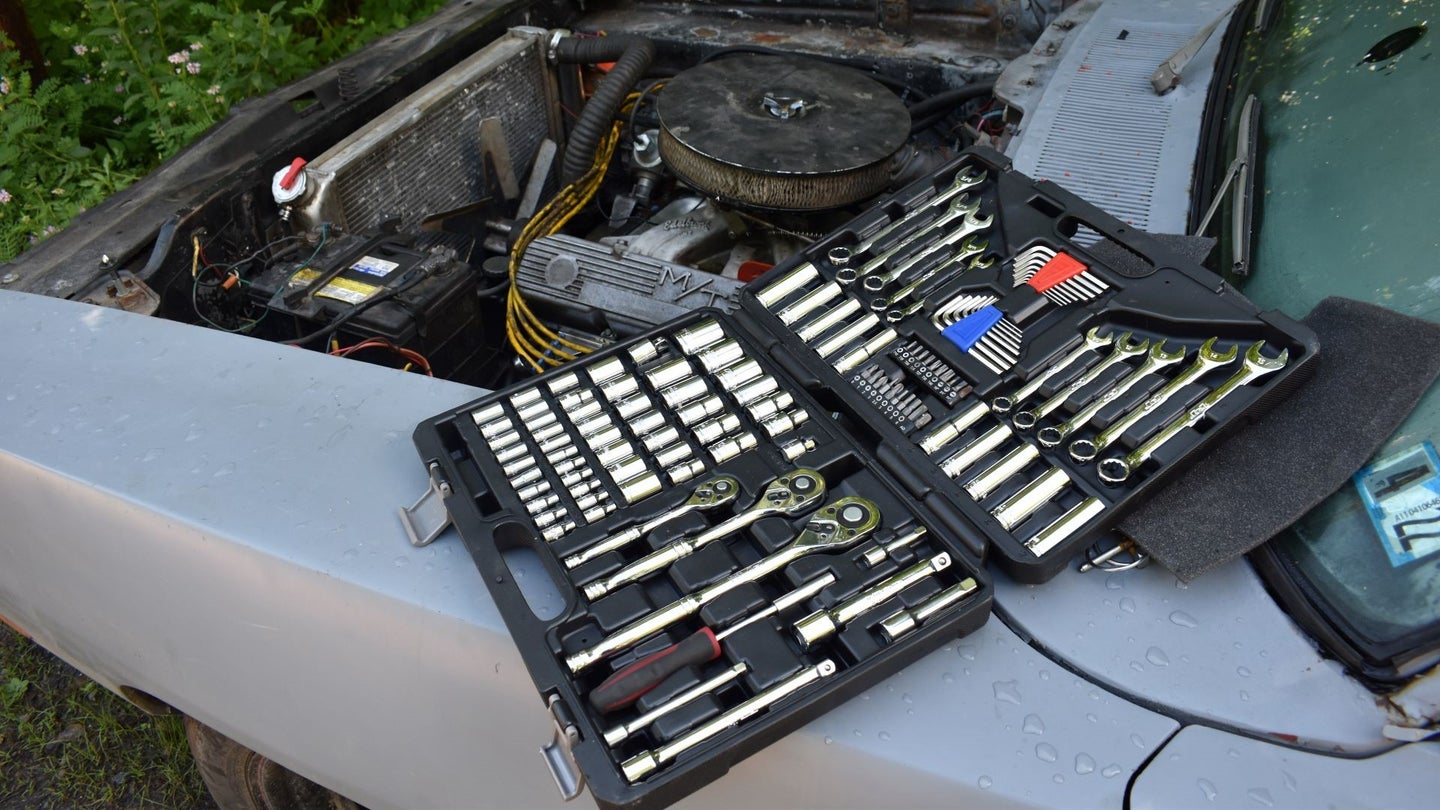 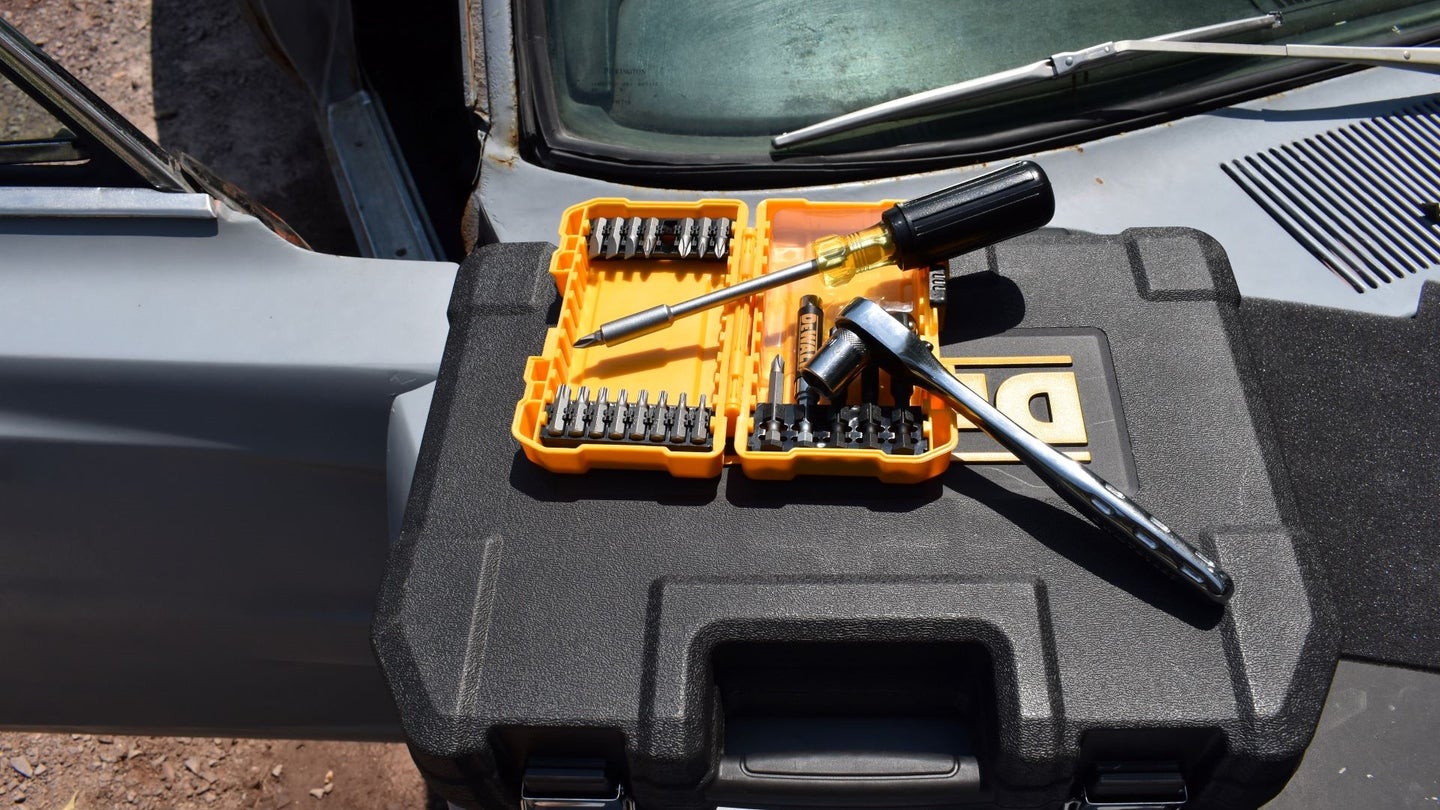 DeWalt’s Mechanic’s Tools Took Us by Surprise, and We’re OK With That: Review

Does DeWalt’s tool set live up to the brand’s reputation? Let’s find out. 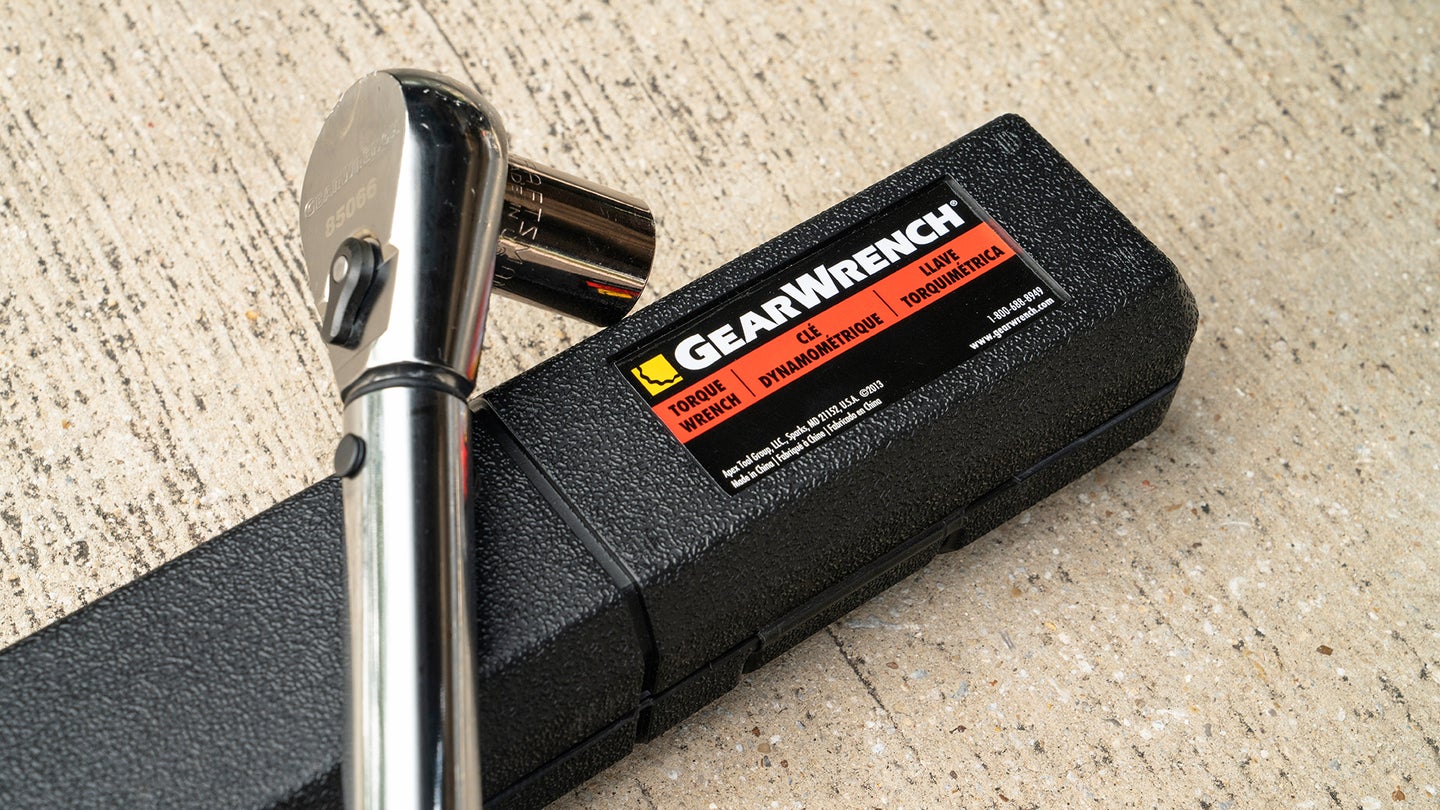 Fix Your Car Like a Professional with GearWrench’s Torque Wrench

Torque wrenches are the best way to prevent righty tighty from becoming too loosey.