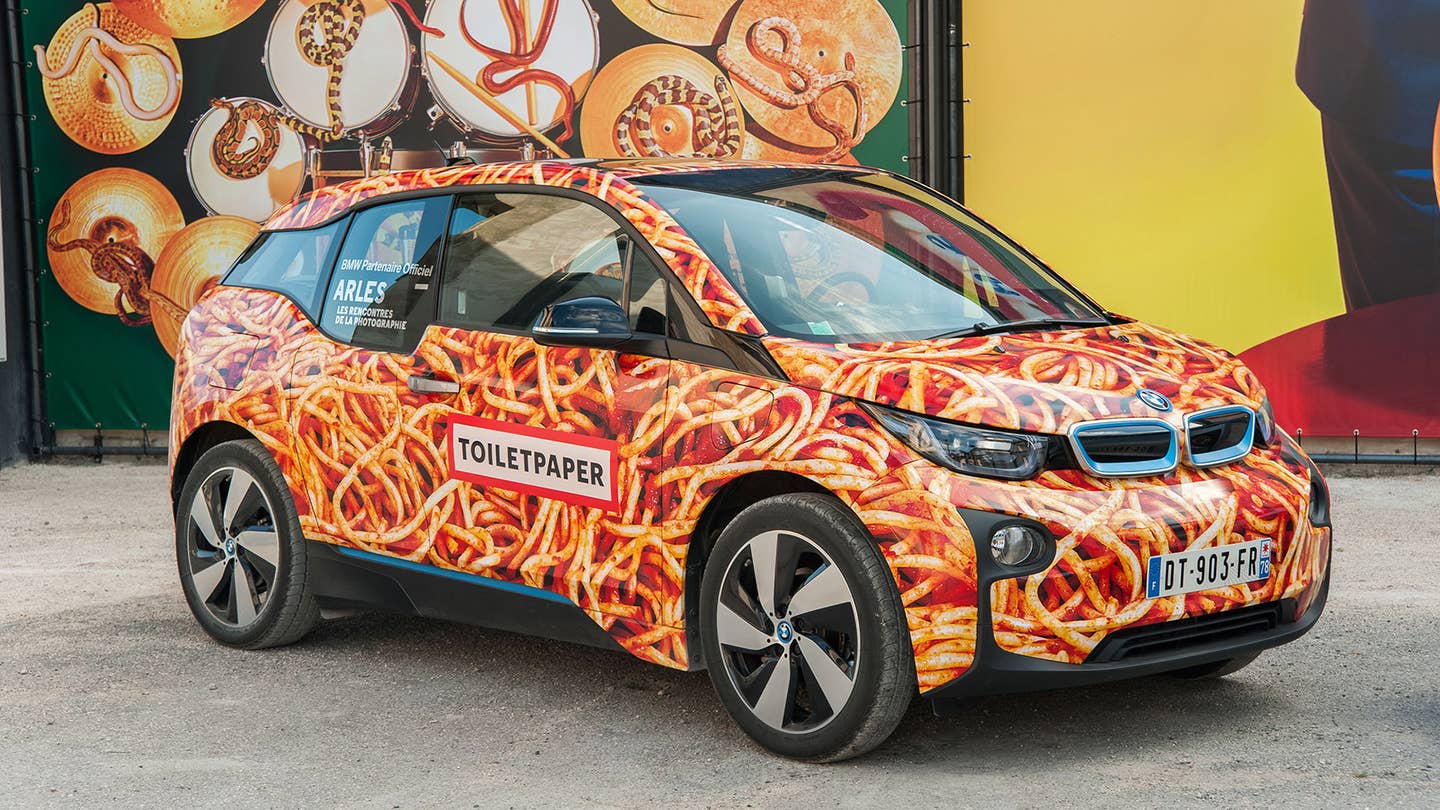 BMW’s Art Car series encompasses a forty-year history of collaborations with blue chip artists, who have designed and decorated versions of the Bavarian brand’s iconic vehicles, from Alexander Calder’s vibrant color collage “Batmobile” BMW CSL in 1975, to Jeff Koons’ polychromatic semen-esque explosion on an BMW M3GT2 in 2010. The suite of seventeen vehicles are exquisite, artfully crafted rolling sculptures, expert in both enunciating the marque’s heritage and evoking an era’s artistic zeitgeist.

Some of the same comments could be made of the highly decorated vehicle BMW just unveiled at the French Rencontres d’Arles Festival of Photography. Except that it was created in collaboration with Italian artist/prankster Maurizio Cattelan, a man famous for installing a penned donkey in the Frieze Art Fair and installing a solid gold toilet in the bathroom of the Guggenheim Museum, before allegedly retiring from the art world. So, instead of being covered in lovely abstracted iconography, cartoonish pointillistic Ben-Day dots, or pseudo-political statements, Cattelan’s BMW i3 electric car is coated in what appears to be a wrap of overcooked pasta in canned tomato sauce. (Now that’s Italian!) Also, Cattelan claims that the car, created for the art fair and for his photographic art journal Toiletpaper, is not officially part of the Art Car series. And, furthermore, that it is decidedly Not Art.

“For us to call Maurizio’s car ‘art,’ especially against his own declared will would be preposterous, so we shall leave that for the onlooker to decide,” BMW’s Head of Cultural Engagement, Thomas Girst, told me. “Are we thrilled? Oh yes! Do we like spaghetti? Mhm! Are we in awe of Maurizio at times he creates and at times he does not create anything at all? For sure!”

The winking protest from an artist about an artwork being and not being art has been with us for at least a hundred years, since Marcel Duchamp exhibited (and sold) mass produced objects like a bicycle, a shovel, and a urinal. Such shenanigans are intended to simultaneously undermine, democratize, and enhance the stature of an art world that thrives on both being poked fun at, and on taking itself far too seriously. (Notably, BMW's Girst has written three books on Duchamp.)

Cattelan, like so many of his most successful contemporaries, thrives by at once allowing the viewer to be in on his rather accessible slyness, and by being the one who cashes the eight-figure checks generated by the prominent sales of his work. If some sliver of the erudite contemporary art market—or Not Art market—is a joke, Cattelan is certainly not Not Laughing all the way to the Not Bank.

“There is a sense of self-determination that today’s artists, from the well established to younger ones, are working with today,” says curator and NYU art professor Isolde Brielmaier. “A certain combination of self-aware complicity as well as defiance toward the very art world systems that govern the mainstream. And it’s great to see.”

So Cattelan can mutate his Spaghetti3—shred it like John Chamberlain, unravel it like Noah Purifoy, or ball it up like Lars Fisk—or he can destroy it completely, and it still somehow escapes its ability to be Not Art. Which, it would seem, is kind of the point, for an artist, even a retired one.

“Thanks to our world’s critics, scholars, curators, artists, and everyone else who often has a strong opinion about things, there is no one singular definition of what can, is, or even should be ‘art,’” says Brielmaier. “The catch is, that once it is released into the world, something like Cattelan’s ‘non-art’ works become whatever other people, the public, want them to be. And while his sentiment is understood just as Duchamp’s was, Cattelan’s previous role as an ‘artist’ inevitably injects ‘art’ into the conversation around these works.”

John Baldessari, the octogenarian California conceptualist, has already been announced as the creator of the next official, actual, physical Art Car, an M6 GT3 which is slated to be unveiled later this year, at Art Basel Miami Beach, in time for the tail end of the brand’s centenary celebrations. But the subsequent Art Car will be designed by Cao Fei, a young Chinese artist who works in multimedia and video. Might it be possible that the next BMW Art Car will solve, or further complicate, this artistic/non-artistic dilemma by not being a physical object at all, but one that exists solely in the virtual realm?

“Cao Fei is precisely looking into the possibilities of taking the series one step further right into the digital realm. After all, that is what her previous work has focused on,” the contagiously excitable Girst says. “Expect something amazing in 2017!”