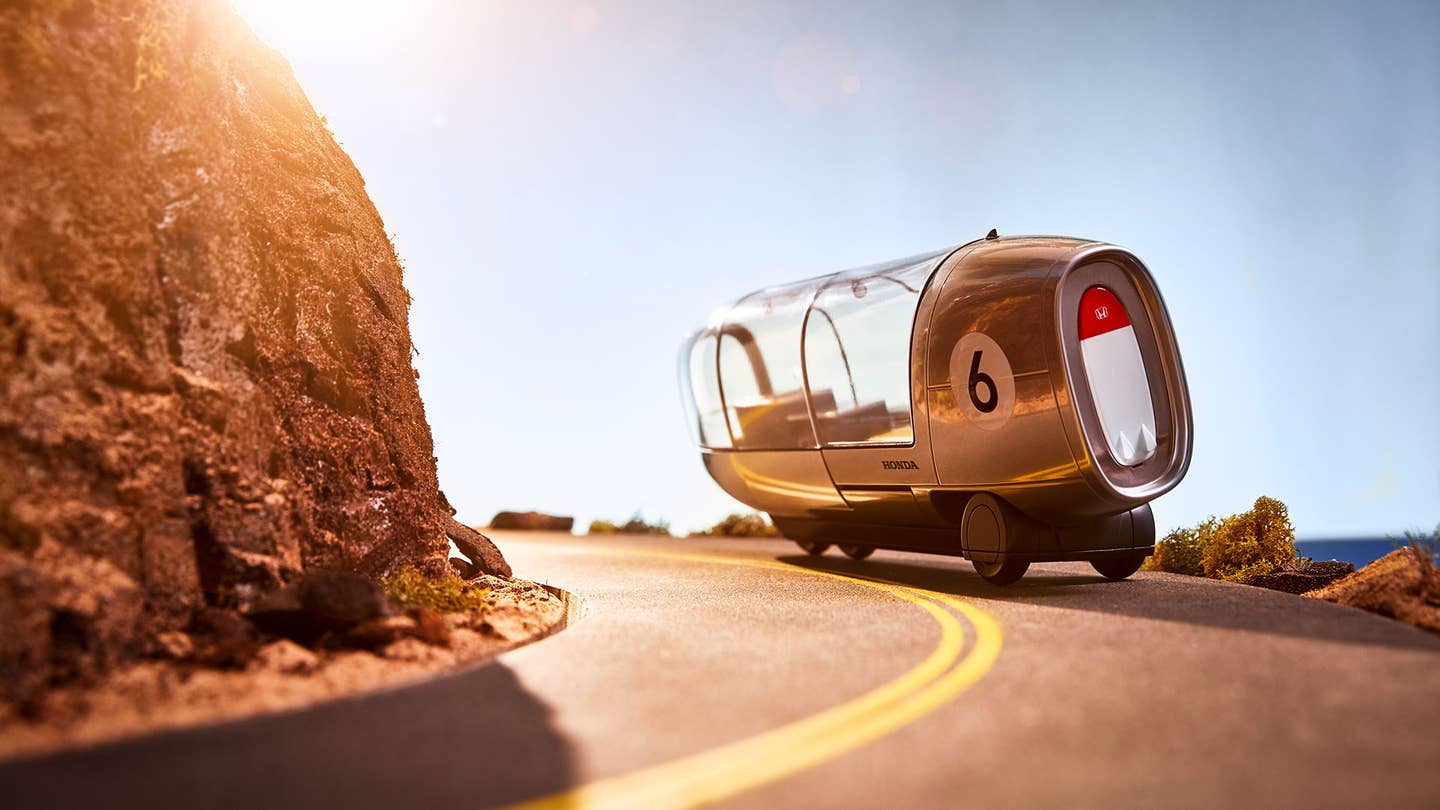 Honda never wants for cleverness. Battling for Exhibit A are the humanoid Asimo robot, the Uni-Cub gyroscope unicycle, the 130 mph Top Gear riding mower, and the trick vacuum cleaner aboard the Odyssey minivan. Recently, though, the brand has run alarming excitement deficits, something even the company's CEO acknowledges. “We began producing watered-down, uninspiring, what you might call designed-by-committee cars,” Takahiro Hachigo told Reuters in February. A brilliant new Civic and bloodthirsty Acura NSX GT3 have brought some relief, but much work remains to redeem Japan’s erstwhile fun factory.

What you’re about to see is as good a start as any. In an automotive-media exclusive, The Drive reveals a project undertaken to highlight Honda’s efforts around autonomous-driving technology. What you’re likely to take away, though, is that Honda has won the Internet.

“Honda. Great Journey.” is the product of London-based design agency Map, with creative direction from Japan’s Mori Inc. If you’ve ever marveled at OK Go’s video for “I Won’t Let You Down,” you know Mori:

And if you know any clever school kids, they may have built a Kano computer that Map helped design and package:

“Instinctively, we felt uncomfortable with something that could seem artificial, like CGI,” says Jon Marshall, design director at Map. Along with Mori principal and founder Morihiro "Mori" Harano, Marshall and the Map team decided to go tactile. “We started talking quite early with Mori that the end result would be physical model making,” Marshall says. “He loves the physicality of things.” (To understand Marshall’s observation, take this insane Mori detour. And to see how keenly Mori understands Honda, come back for this.)

Physicality is a curious jumping-off point for a project about autonomous technology: a realm of sensors, cameras, LiDAR, radar, and legislation. It’s a bloodless business, where one must hunt and peck for any human touch. That’s what “Great Journey” rails against: it yanks self-driving cars from their test tracks and tech campuses and plunks them down in the Darien Gap.

Map and Mori decided to retrace 22,625 miles of human migration, from Africa to Brazil, in seven purpose-built scale-model rovers. Each vehicle is designed toward one terrestrial task, whether it’s blasting over desert dunes or cautiously navigating crevasse-peppered ice fields. Autonomous technologies facilitate each leg of the journey, but they never get in the way of the adventure.

Much of the rovers’ styling was inspired by a Map field trip to the Honda Collection Hall in Motegi, Japan, where classics from the company’s past, from little Cub scooters to Grand Prix cars, are displayed

“There’s a kind of a craft to those designs, and a beauty and a wit—more than what you’d maybe be accustomed to seeing from the corporate side,” Marshall says. “There was a city car there, and they’d developed a motorbike that could fold down and be placed in the boot of the car. We felt we had to channel that wit into our designs—not in a joking way, but in a thoughtful way.”

Map commissioned a stop-motion film to complement the hand-hewn look of the project. The mini-doc, produced by Czech filmmaker Petr Krejčí, has transformed The Drive into a bunch of slobbering eight-year-olds:

The cars are pure mischief. A balloon lifts a van's roof above the Sudanese savanna. Uni-Cubs bound like sled dogs across Siberia. Robotic arms clear boulder-strewn Himalayan passes. They’re what a Jetsons-watching school child—or maybe Wes Anderson—would envision if you were to say, “Draw a self-driving car.” It’s no great coincidence.

“We’re not really petrolheads,” Marshall says of the Map team. “There are a lot of keen cyclists among us, though, and that might’ve played a role, thinking beyond what maybe most people would think of when you hear ‘autonomous car.’”

Initially, Map envisioned just one scale model making the journey. The rover would pull into Honda factories around the world and get retrofitted for the next leg. But logistics, even in the realm of make-believe, proved prohibitive. “It didn’t work out because sometimes there weren’t Honda facilities at the parts of the route where they were needed,” Marshall says.

What will become of the stars of “Honda. Great Journey"? Might we see them on motor-show stands or TVs later this year? Even Marshall is unsure, but in the meantime they sit “under lock and key on a very nice bookshelf” in Map’s London studio. Hopefully they won’t be there long. With only imagination to power them, these little rovers might've just jump-started a very large company.