You don’t want something to own you. You want to own it. 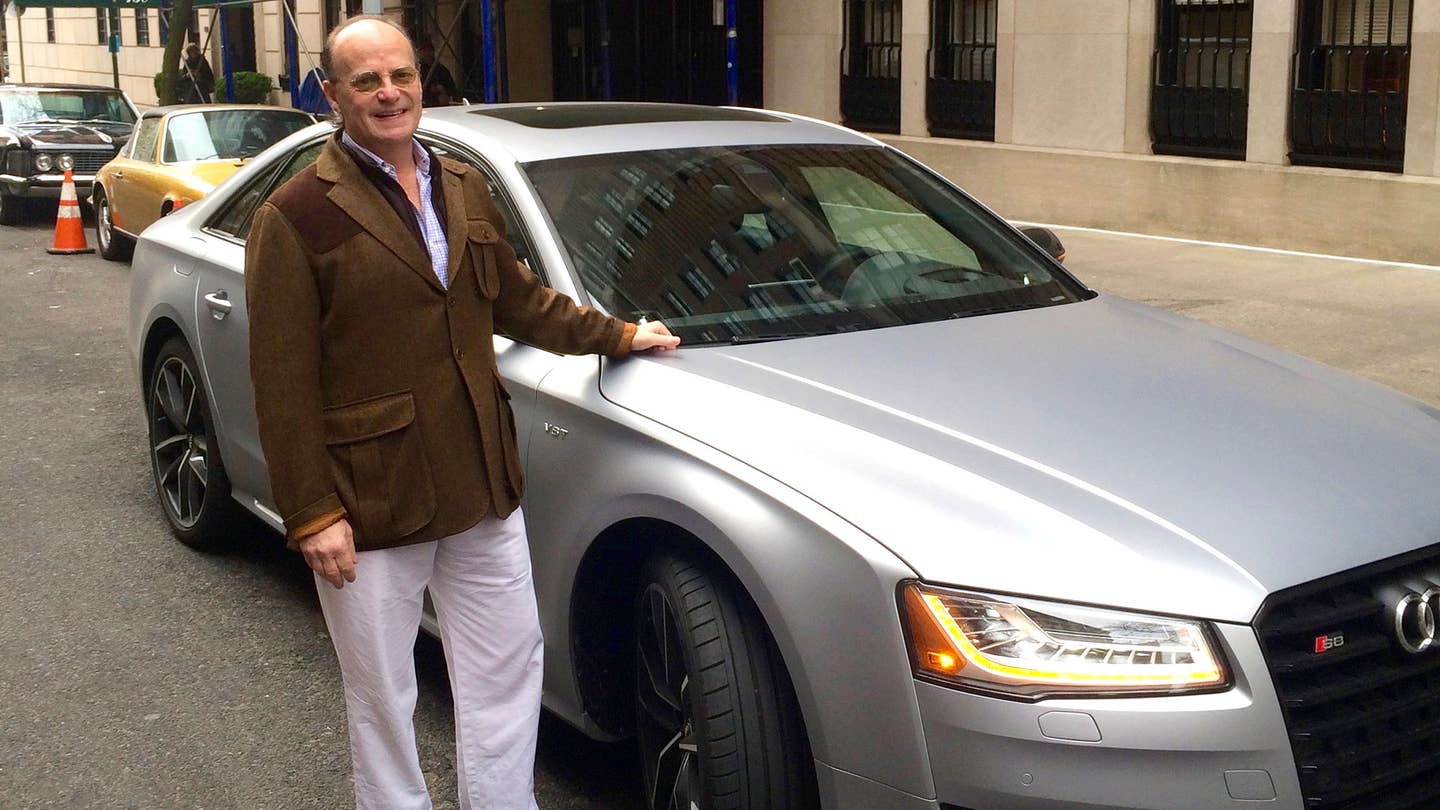 Tom Samet’s clients are people of means. So it is not surprising, when I go to meet him on the job in a $152,000, 605 hp, matte-Florett Silver Audi S8 Plus, that the Park Avenue doorman assumes I’m a chauffeur. He tersely instructs me to roll forward of the building’s awning so no resident will have their hairdo ruffled.

The S8 Plus may look to the untrained eye like any other executive livery sedan. But, as Samet notes when he emerges from the limestone pile layered in tweeds and scarves and hops into the front seat, that this is not because it's ubiquitous, but because it is stealthy.

“This is a contrarian's choice to an S-Class,” he says. “This is an intelligent man’s sports car. It’s a car person’s car. Though the differences, the cues are very subtle.”

Samet is himself a consummate car person: he claims that his first word was “Ford,” read from the taillight of his mother’s 1955 convertible. His first Audi was a 100LS, purchased “one hundred years ago.” (He exaggerates; he's only 60.) He’s owned Jaguars, Alfas, and Porsches, and currently drives a BMW 5-Series Wagon and a Mercedes E-Class Wagon. He even once lived in a chauffeur’s cottage in East Hampton. “A little house, but a nine-car garage,” he says. “I had nine interesting cars.”

Samet implements in his decorating practice the same kind of discerning contrariety he brings to his choice of automobiles—the kind that his clients notice, and that is noticed by people in the know, but doesn’t broadcast brash flash. “I don’t want it to be overdone and make it look like I’ve tried to hard for somebody," he says as we steam away from the building and head south on Park. "It should look like it was easy, even though a lot of thought went behind making it look easy. A car like this is just the right kind of car in that way, where you’re on the radar but you’re not trying to make a big noise in front of the radar. I like that kind of design."

And, noting the big Audi: "It’s for a secure person, this car.”

Given his autophile history and current status as a professional aesthete, I wonder what catches his eye on this particular super-sedan? “The stitching, the details,” he says, running his hand over the dash’s red-threaded black carbon fiber, which looks like the fascia on a Monegasque roulette wheel. “And I really like all the shininess, the matte finish metals, the Ultra-suede. It’s very fluid. It brings all the light from the outside in. That’s what I do with my decorating, as far as putting a bit of varnish on things. I like to roll the light through, and the light rolls through nicely here.”

Even when designing the interior for a lavish, $30 million Upper East Side duplex, Samet insists that there is an undercurrent of utility behind his philosophy. “Practicality is part of beauty. When I design a room, knowing the function is key—that you don’t have to fluff every chair, that you can sit here, that the fabric is a little bit durable.” He recalls a particular client who wanted her drawing room done all in silk: “I said, One misplaced cocktail and it’s all ruined. She said, My friends don’t spill. I said, It’s not that. Moisture from a glass will ruin it. She said, We’ll give them napkins!” He laughs. “You don’t want something to own you. You want to own it. This is why I’m busy. I’m strangely practical for someone that’s aesthetic. I’ve owned Rolls-Royces, Bentleys. They were beautiful. But I could never drive them. They kicked my butt.”

He caresses the Alcantara inserts on the doors. "The driver that drivers me around New York has an old S8L, and it doesn’t blend in with the Escalades and S-classes. It looks different. But it’s held up, and with a hundred and seventy thousand miles it still looks great."

Still, in mapping the intersection of automobiles and home decoration, sometimes sheer beauty triumphs for Samet. “I like the way a car looks sitting in front of a house—a certain kind of car,” he says. (Samet says he is particularly fond of classic German wagons.)

“The way you feel when you open the door of your home, you walk into the front door, is the way you should feel when you open the door of your car and you walk into your car. That tiny bit of an endorphin that happens when you feel: I’ve made the right decision,” he says. He points to the Bang & Olufsen speakers that rise from the dash, along with their padded leather hats, when the car starts. “I think that it would be hard even for someone who’s not into cars to get into this one and not notice that they’re in a very special car.”

Samet’s sensible sensibility extends to technology as well. “People don’t want things to be too complicated. When BMW came out with their iDrive, and everything was more complicated, people weren’t happy, even though they had all these features.” He looks appreciatively at the A8’s crisp, Google-enabled navigation screen, and twirled the MMI controller, zooming in and out. “It’s just, ease of use.”

I wonder if this extends to his work with his high-end residential clients, for whom tablet-based home automation systems like Crestron have become de rigueur. “I still like knobs and buttons,” he says, as he twists the S8’s knurled HVAC rheostat . “There’s lots of problems with those computerized home controls. You have somebody tasked to take care of your house, and they can’t turn the lights on, they can’t answer the door or the telephone.”

We pull around a corner and he points, by way of example, to another grand Park Avenue building. “People I know here, clients, the music in their apartment was turned on around ten years ago with one of those systems. And they don’t know how to turn it off. The music is on like in a hotel, twenty four-seven."

Audi’s Flagship S8 Still Has What It Takes