Non-Sequitur: The Coolest Chronograph at Baselworld

The Eterna Super KonTiki Chronograph has ties to Porsche, and is top our pick from this week’s Swiss watch confab. 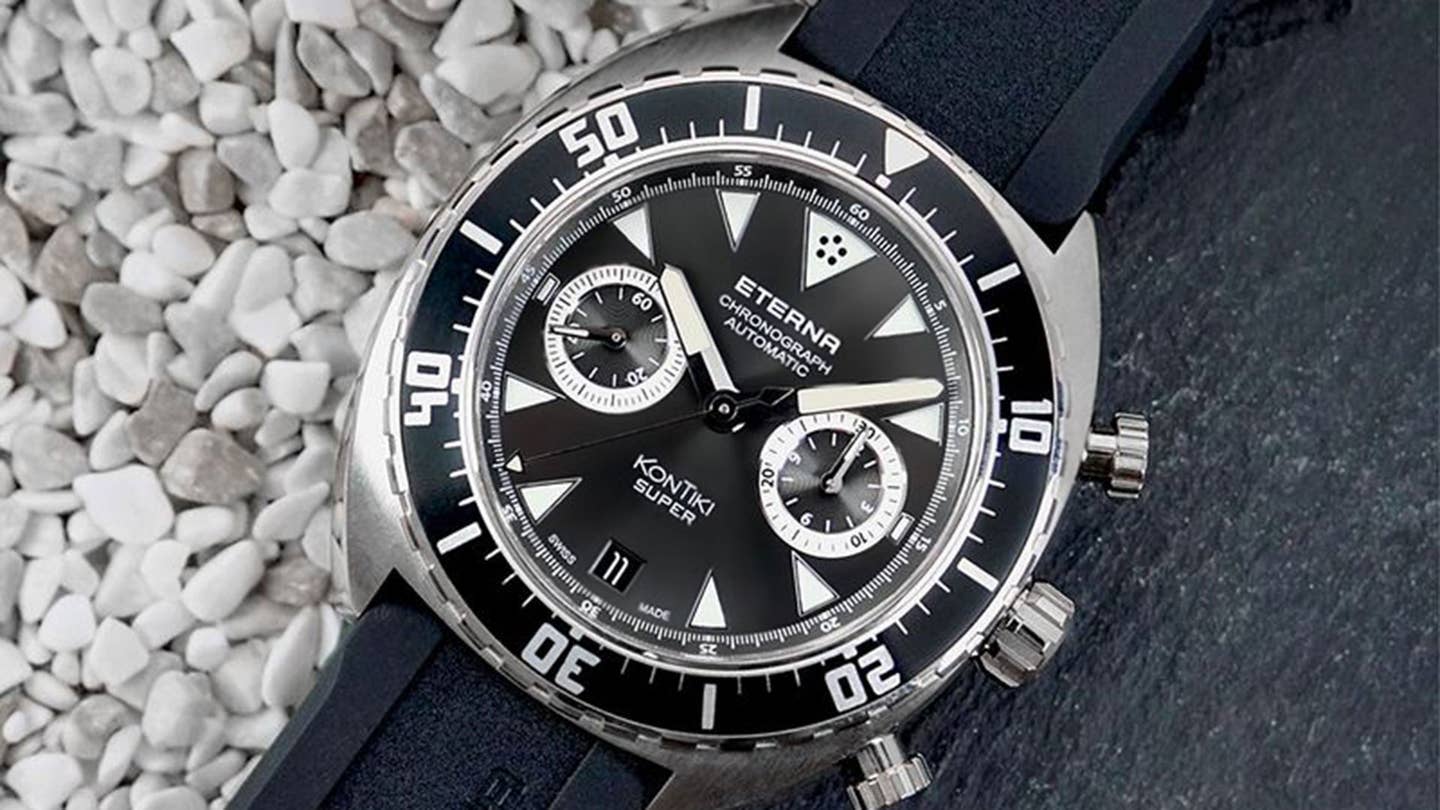 Baselworld, the biggest watch convention of the year, starts Thursday, but we've already picked our favorite timepiece from the show: Eterna's Super KonTiki Chronograph. If you’re a watch dork you already know Eterna. Or maybe you're a Porschephile and know them as the former movement supplier for Porsche Design watches. In any case, a quick backstory: Eterna pioneered self-winding movements in 1948 with the debut of the Eterna-matic, via the use of a rotor mounted on five ball bearings that, coupled with the wearer's natural movements, acted as an inertial drive. Modern Eterna timepieces still wear the five-bearing logo on the watch face.

But in 1932, ahead of this innovation, Eterna made ébauches (a.k.a. movements) that were sold to other watch brands. Much like in the car world, where engines are often supplied by sub-contractors (think of Mercedes-AMG supplying Pagani, for example) watches—even very expensive ones—are often built as a mere "chassis," with other manufacturers supplying the guts.

And through much of the early 20th century Eterna was really two houses in one, divided between making its own watches and making movements for other watchmakers. The movement division eventually became the world-famous ETA and was gobbled up by the massive Swatch Group, though modern-day Eterna, the watchmaker, remains independent of Swatch and is free to invent its own timepieces and movements. Just last year, Eterna debuted the Caliber 39, a modular movement that can be used in anything from a single-movement watch to a more complicated chronograph, all without having to significantly alter the watch's mechanics. That’s a big deal, and the latest riff on that same Caliber 39 movement is found in the Eterna Super KonTiki Chronograph with flyback (this feature, which resets the chronograph to zero through a counter-clockwise sweep of the second hand, is catnip to watch nerds).

The KonTiki is a tribute to Norwegian explorer Thor Heyerdahl, who sought to prove that South American mariners could have discovered and settled Tahiti. In 1947 he set out in a primitive craft from Peru with nothing more than a crew, a hand-crank radio, and six Eterna timepieces. After a successful journey, Heyerdahl became an international celebrity.

After Heyerdahl made their watches famous, Eterna returned the favor by producing KonTiki models from 1962 on.

This 2016 edition is particularly sweet, not only sporting that impressive Caliber 39 movement—visible through a case back sapphire window—but also waterproof to 200 meters, with an old-school tonneau case with integrated lugs and classic Eterna arrows, rather than numerals, on the face. These are treated with photo-luminescent SuperLumiNova paint, as are the hour and minute hands, making the watch face visible underwater or in the dark. Since it's a dive watch, the bezel rotates, and the 45mm diameter is large but not unwieldy.

It's a beautiful update on a classic watch—and, at $4,700 on the rubber strap or $4,900 with the metal bracelet, a fairly affordable way to invest in an iconic Swiss brand with in-house mechanicals and watch-nerd credibility.