What’s a Planetary Gear, and How Does It Work?

The inner workings of modern gearboxes are too interesting to ignore. 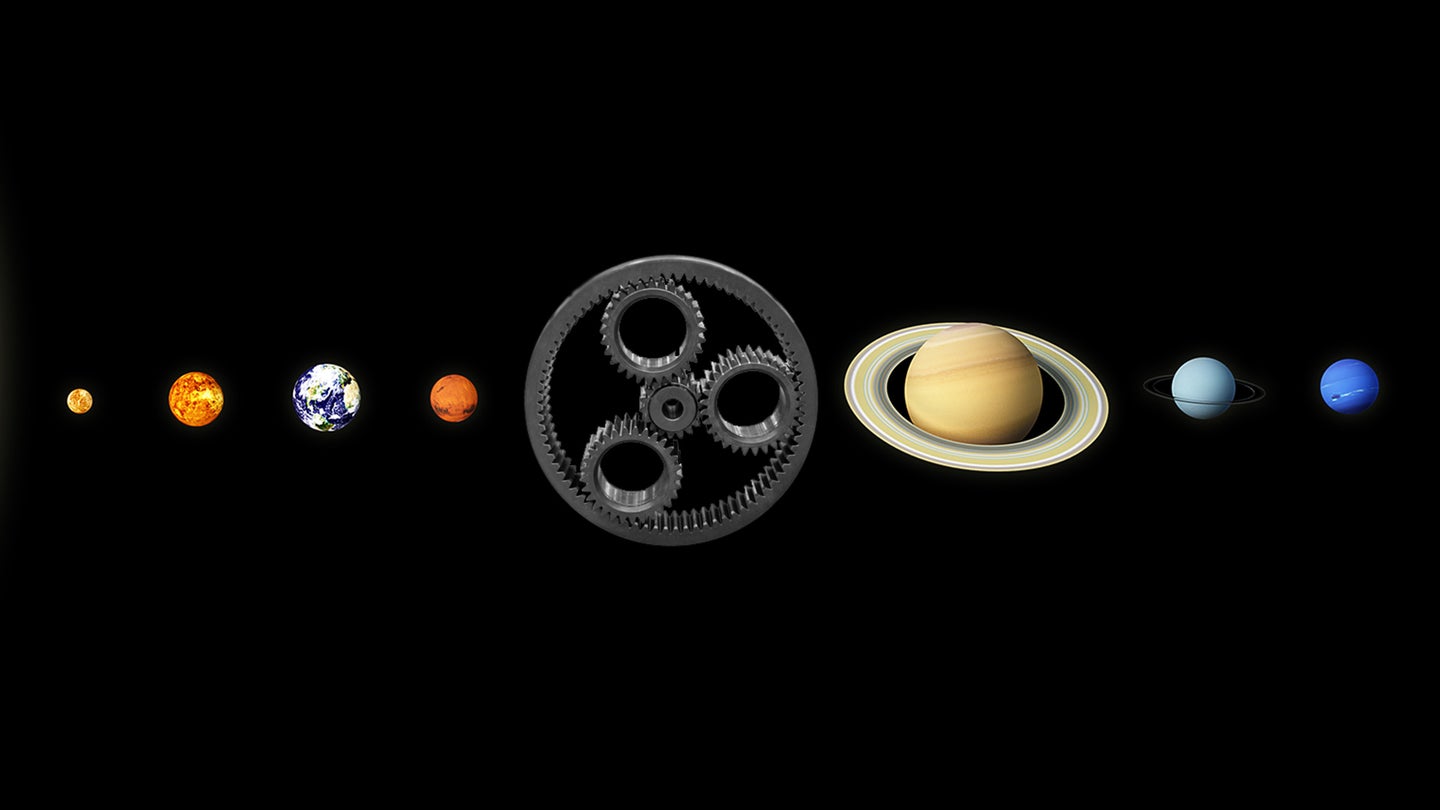 Even if you’re an experienced home mechanic, there are parts of your car that probably give you trouble. They’re either too hard to access or too complex to work within your garage. Transmissions tend to fall into this category because they are complicated components with tons of internal moving parts that require an exact placement to function properly.

It’s one thing to avoid home repairs on a transmission, but gears and the inner workings of modern gearboxes are too interesting to ignore. Planetary gears fall into this category, and as a technology that has been around for thousands of years, it’s fun to think about them turning away in most modern automatic transmissions.

What are planetary gears? How do they impact your daily commute? We've laid out the groundwork for you in this post, and our aim to help you understand the basics of planetary gears and transmissions in general. Let’s get rolling.

You Said Thousands of Years. When Was The Planetary Gear Invented Exactly?

Planetary gears, also known as epicyclic gears, were developed by the Greeks more than 2,000 years ago and were initially intended to help predict the movements of planets in the solar system. As to how they came up with the gear, the simplest explanation here is the best one, which is that planetary gears consist of a central drive gear (i.e. the sun) with multiple “planet” gears that orbit around it. A ring gear surrounds both the central and planet gears.

In the automotive world, the first transmissions to use planetary gears were fitted in the early 1900s to the Wilson-Pilcher automobile, which was manufactured in the United Kingdom. The Ford Model T then used planetary gears in 1908 for its two-speed manual gearbox. Jumping forward a few decades, Oldsmobile developed an automatic transmission in 1937 that used planetary gears dubbed the "Automatic Safety Transmission," and it was able to shift between high and low gear ranges and used a clutch only for standing starts.

How Do Planetary Gears Work?

Planetary gearboxes can be used in conjunction with internal combustion engines, electric motors, or hydraulic motors and are used because of their durability, efficiency, and ability to handle high torque loads. As mentioned above, the central “sun” gear is usually the input gear. Around it, two or more planet gears rotate within an outside ring gear and are connected to the output shaft via a carrier.

An example of how this can work is when the sun gear rotates and planet gears are held in place. As the sun gear turns, it causes the planet gears to rotate in place along the inside of the ring. This motion, in turn, rotates the output shaft in a reverse direction.

Need some help visualizing it? Here's a video of a planetary gear in operation.

Where Are Planetary Gears Used?

Elsewhere, planetary gears are used in equipment such as augers and wind turbines, and in-vehicle drive systems for helicopters and aircraft engines. Planetary gear sets are popular for industrial machinery too, where guided robots, laser cutting machines, and even hospital operating tables use them. There's also a great chance that the sandwich meat in your refrigerator was cut on a slicer that used planetary gears.

Passenger vehicles with automatic transmissions use planetary gears, so your grandma’s Buick uses them, just like your neighbor’s annoying 1995 Ford Mustang V6.

Where traditional automatic and manual transmissions feature gear ratios that are fixed, a continuously variable transmission (CVT) works with two cone-shaped pulleys connected with a belt. They are used to improve fuel economy, as CVTs are typically designed to keep the engine in its most efficient and ideal power delivery range.

There are, however, versions of CVTs that use planetary gears. Called epicyclic CVTs, or planetary CVTs, these transmissions use planet gears to transfer torque. Toyota used one in the Prius back in the late 1990s.

How Does a Planetary Gear Relate to Portal Axles?

Portal axles are used to improve ground clearance and allow for gearing that reduces stress on the differential. Vehicles such as the Mercedes-AMG G63 6x6 truck and the Mercedes-Benz Unimog use portal axles. In these applications, an epicyclic (planetary) hub gearbox is used, which allows the half shafts to turn faster than the wheels.

This reduces the amount of torque needed to generate the same level of power. In the case of vehicles like the Unimog and G63, the large wheels and tires already provide most of the necessary ground clearance, so the portal axles play a slightly different role.

Q: How do I know if my car has planetary gears?

A: If you drive a modern car with an automatic transmission, there’s a solid chance that it has planetary gears. If you’re dedicated to finding out, check your vehicle’s maintenance manual for information on the gearbox, contact your dealer’s service department, or try that all-knowing search bar we’re all so dependent on.

Q: Are planetary gears more expensive than other types?

A: In general, yes. They are more expensive because they are more complex and are composed of more parts than other types of transmissions.

A: Yes. Just like any other gear or mechanical component in your vehicle, planetary gears need lubrication to operate smoothly and to prevent damage or wear. Transmissions, like all other parts of your vehicle, need regular attention and servicing, which can include minor work such as fluid changes. Over time, the gears inside a transmission can wear, leading to slipping or odd noises, so it’s important to keep up with lubrication and regular maintenance to get on top of problems as quickly as possible.

We’re here to be expert guides in everything How-To related. Use us, compliment us, yell at us. Comment below and let’s talk! You can also shout at us on Twitter or Instagram, or reach us all here: guidesandgear@thedrive.com

Things To Know When Considering a Transmission Rebuild

Ever wonder how an automatic transmission changes gears? Now you can print out a model to see how it’s done.