The Ontological Quandary of the “Performance” Crossover

The BMW X4 M40i is an odd combination of tall, fast, and very thirsty. 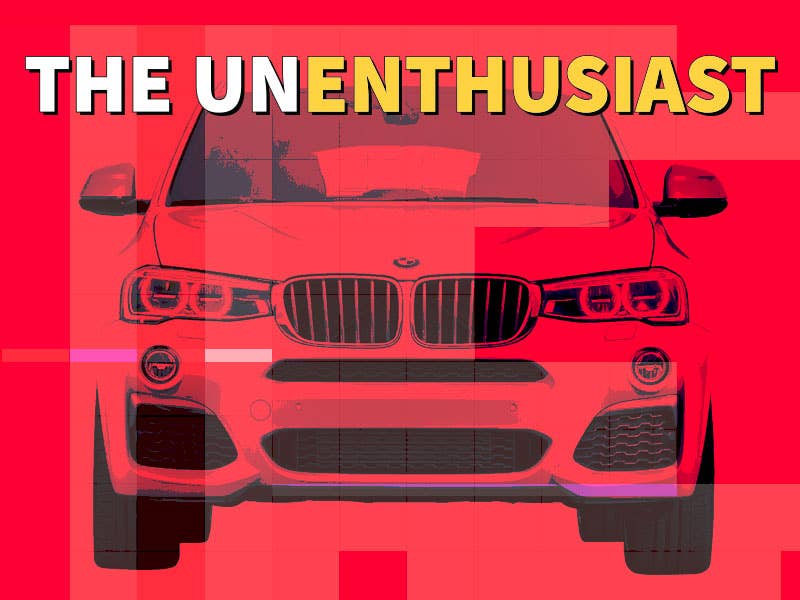 Ever since I got pulled off the test-drive circuit in favor of writing a weekly lecture about the dangers of distracted driving, new cars have grown somewhat obscure to me. I see the high-end stuff on the car TV shows, but the new batch of the automotive world’s vast middlebrow—even upper-middlebrow—remains as pixelated as an interview with a guy in the witness protection program. So when the 2017 BMW X4 M40i got listed a few weeks ago on my test-drive schedule, the combination of letters and numbers made no sense to me at all, other than the “BMW” part. What kind of car was going to appear?

Early on a Wednesday morning, the old dude from Dallas knocked on my door with the keys. On the street, in front of my lawn, sat the X4 M40i.

She, if you have to give her a gender, was bright red, “Melbourne Red” according to the spec sheet. That sheet also indicated that she cost $67,495, so hardly a bargain-bin item. I went out to look at the car. The lines and shape of a BMW 3-Series appeared to be there, but sitting atop several extra inches of metal. It was a sports sedan with a double chin.

Inside, everything seemed familiar: The yellowish-brown leather, the oblong gearshift, and the unenthusiastic slivers of high-gloss wood paneling. I pressed a few buttons on the driver’s seat, down to the left. The four-way cushioning form-fitted to my back like Tetris pieces. It felt like a 3-Series with a higher sight line. I longed to be closer to the ground.

My neighbor, driving down the street, pulled up next to me. He obviously wanted me to roll down the window. I did.

“Yeah, I’m still trying to figure this one out,” I said.

No one stops to admire when I have a Camry or a Pathfinder in the driveway. The X4 M40i had passed the neighbor sniff test. But I actually didn’t know the answer to his question.

So I called BMW and spoke to Matt Sosna, product specialist for the M4 X40i, who very politely answered my stupid questions.

It is not an M car, he told me, because “those are high-performance race-inspired machines.” This one, he said, replaced the previous top-model X4 crossover, which was called the XDrive 35. The new engine has been “infused with performance characteristics” co-developed with BMW’s M division. Coming soon in the “M performance” category will be the M240 coupe and convertible and the M 760i, which will almost certainly be disgustingly luxurious.

This “infused” drivetrain has a new aerodynamic air intake manifold, higher turbo boost pressure, a forge-steel crankshaft, and higher-performance spark plugs, and 355 horsepower—55 hp more than the old model. It does 0 to 60 mph in 4.7 seconds, a half-second faster than previous. It also has, Sosna told me, an M-tuned variable damper control system, and increased “camber,” a new term to this Unenthusiast, meaning that the wheels have been angled outward to improve steering feedback. There are performance brake pads, as well as stronger springs, stablilizer bars, and wishbones. It has a dual-exhaust system that makes a very aggressive sound.

“No,” he said. “It’s not supposed to be a full high-performance car. Our customers asked for more high performance, but they valued comfort and versatility and still wanted the four doors and the larger trunk area.”

I drove the car around all week, and I enjoyed myself, because who wouldn’t enjoy driving a new BMW around all week? It was definitely fast, and handled precisely. It felt strong, stable, and comfortable. But I still found myself in the mood for a nice little coupe.

In general, I wish the performance brands would get the hell out of the SUV and crossover space, but they can’t, because that’s all anyone wants to buy. So instead, you get “enhanced” machines like the X4 M40i to drive to Costco. BMW sold 1,357 of these last year, which was obviously enough to persuade the company to keep making them.

If I had $67,500 to spend on cars, which I don’t, I’d split the difference and get a Subaru XV Crosstrek for the grocery store haul and then I’d put the rest of the money toward a proper 3-series, (or a Tesla Model 3 on a wing and a prayer). Along those plug-in lines, I’d be more willing to consider the X4 M40i if it were electric, which is the way I feel about a lot of these crossover things. They’re just so wasteful. The X4 M40i got 19 MPG in the city, which is bad enough to be guilt-inducing. I don’t care if it has Pamper control, high-tuned brake Calibans, and adamantium spark plugs; any daily driver with gas mileage like that isn’t a justifiable purchase to me.

Eventually, there will be electric options. But BMW won’t have its full line of plug-in performance hybrids ready for purchase until 2025. By then, I’ll be a legit card-carrying member of the AARP, though probably not one who can afford a BMW. I enjoyed driving the X4 M40i, but I don’t want to wait another decade for my dream electric crossover, not even if they promise it’ll have the world’s greatest camber.