First, drive the damn track. Plus, 13 other suggestions for a proper ‘Ring adventure. 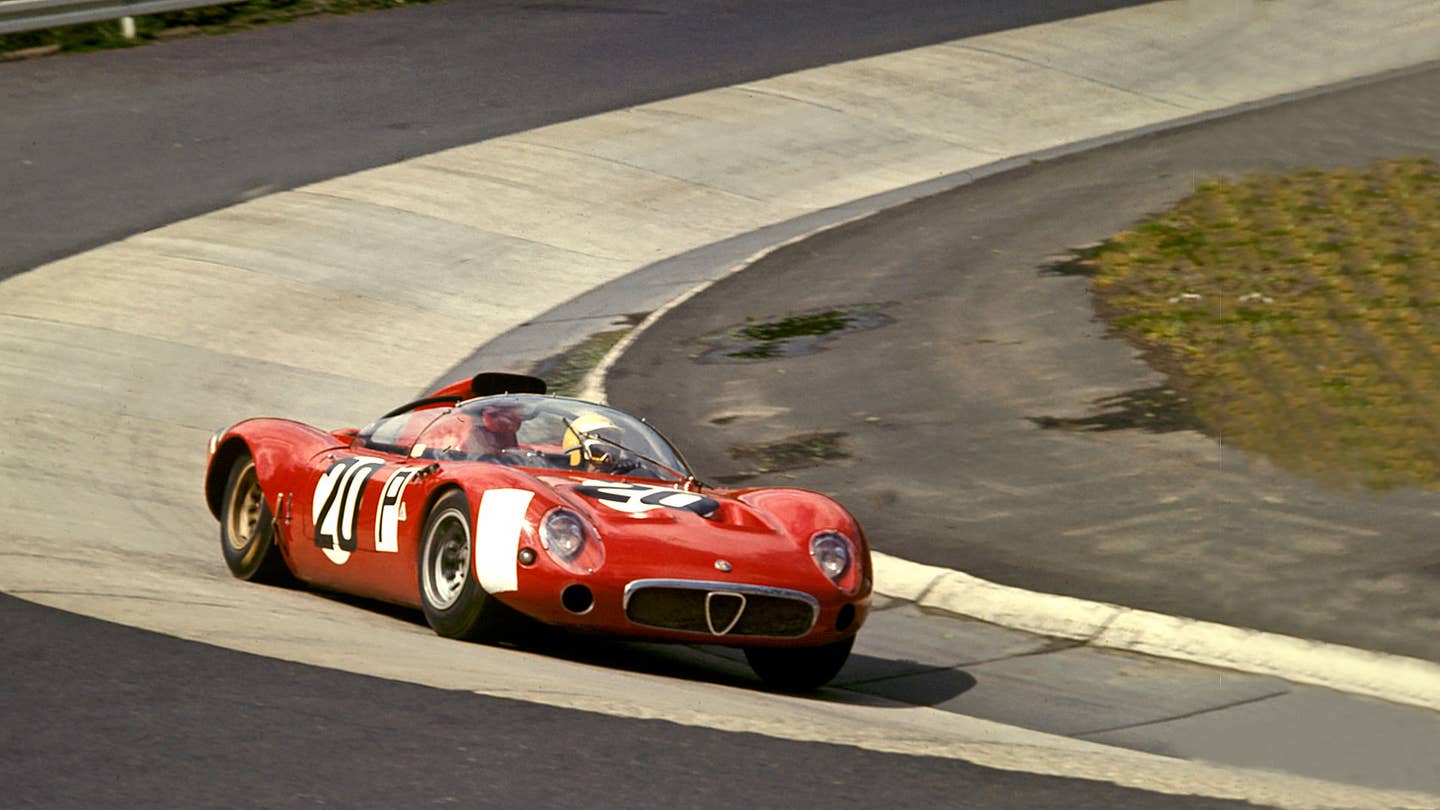 Before you go: Buy a racing game—a good one

Doing a lap of the Nürburgring without practice would be like getting in the Octagon with Conor McGregor after watching a few of his interviews. To drive the 'Ring at something better than a second-gear parking lot crawl, every 'Ring veteran will tell you, that you need to know it blind. The shortest route to that knowledge without paying for mangled Armco is a good simulator, courtesy of iRacing or Forza or GranTurismo, et al.

“It normally takes 50 laps of the North Loop to get to know it," says team owner and 'Ring expert Matthias Holle. "If you spend time in a good simulator, it takes just two or three laps to get good. The simulator can get you 70 percent there—the rest is just learning the real forces in the seat.” Also, try this cornering map guide. And this Circuit Guide

Check the calendar to make sure the track is open when you want to go. Order lap tickets ahead of time—as of this writing, it's €29 for one lap, €550 for 25 laps (about $32 and $608, respectively). Read the safety regulations. Store the emergency numbers—you might not have an accident, but you could encounter one. Peruse Ben Lovejoy's 'Ring site. Watch videos about how to drive the 'Ring, and even more importantly, how not to drive it.

Outsized German influence on the auto industry has been a thing since the invention of the auto industry. Rudolf Diesel invented Volkswagen’s present nemesis. Nikolaus Otto invented the gasoline engine, and Wilhelm Maybach prepared it for automotive prime time. Gottlieb Daimler and Karl Benz invented the first car. And then more things happened. Like profits.

Visiting a German car museum is therefore the right thing to do. The big boys have institutions throughout southern Germany, but don’t be afraid to go rogue and check out other collections like the Classic Remise in Berlin and Düsseldorf, or the August Horch Museum in Zwickau. And if you go to Zwickau, try a paprika doner kebab. Yum.

Traveling far away from the Nürburgring will give you an excuse to go hard, and the land of beer and wurst is one of the few locales on earth where you can legally drive as fast as your car will go (otherwise you have to go to Australia). We procured the services of a BMW M6 coupe, a heavyweight flower that doesn’t blossom until the far side of 150 mph, but Europe Luxury Car Hire will happily put you in a LaFerrari for €11,000 per day (a mere $12K and change!) if you're about that life. Missing out on legally kosher triple-digit action would be a shame.

Or rent a slow-but-peppy car

Summertime is Autobahn reconstruction time, so crews are everywhere, all day, and traffic jams are extraordinary. The best ‘Bahn burning is after 10 pm, but if you’re going to travel with the sun, a Mini or GTI will show you a good time on the highway and an even better time on B-roads. And unlike that M6, you’ll be able to park those littler runners anywhere. And unlike that LaFerrari, they won't ding you for another mansion-mortgage payment every time the cock crows.

It’s fresh and tasty. Pastries, sandwiches, sausages—all of it delicious. I keep a table reserved at the local Aral station. The Germans think I’m crazy. Don’t let that stop you. Eat the gas station food. You can ease into it at the sit-down restaurant at the Döttinger Höhe gas station next to the 'Ring. Then go for Aral. Tell them we sent you.

If Disneyland built a Medieval theme park, it would be the Moselle Valley, and Cochum would be its headquarters. The Romans and the Celts first settled the Moselle River valley (about 30 miles from the track) some 2,000 years ago, and began cultivating wine. Later inhabitants built castles everywhere before Napoleonic invaders tried to destroy them all. What’s left now are wineries, ruins, villages, B&Bs, and exquisite dessert wines. And talking swans. At least, they look like they should talk. Because Disney.

Let me introduce you to the Mosel-Landhaus in Briedern, a few kilometers from Cochum. We found this place by accident, and we can’t thank Expedia enough. At this nine-room bed and breakfast on the banks of the Moselle, proprietors Silvia and Jan will prepare you a home-cooked breakfast every morning and pour you a glass of Moselle Riesling to imbibe on the patio in the evening. It’s a glorious, 45-minute drive to the track, and because you get to the ‘Ring from a side road, there’s hardly ever any traffic. Check out the nearby village of Beilstein, called “The Sleeping Beauty of the Moselle,” and have a steak at the Hotel Gute Quelle. Or stay closer to home and have schnitzel at the Hotel Weinhaus Lenz. You can’t go wrong.

Before you strap in for a lap, make your way around the track to eyeball some action at various corners. Check out Brünnchen, an excellent everyday spy-photo and video location, where grilling during the 24-hour race is so intense that drivers say they can smell the sausages as they fly by. Or Karussel, which looks like it's still under construction and would be illegal at any other track. Or Ex-Mühle, the site of an old water mill, where the cars intentionally drift sideways at the bottom of the hill so they don’t lose momentum climbing the next hill. Or take a break from eating gas station food at the Döttinger-Höhe restaurant, walk across the A258, and watch cars on top speed runs down the Döttinger-Höhe straight.

Do a lap of the 'Ring—from the passenger seat

A hot lap as a passenger with a driver who knows the track blind is your best introduction to a circuit that will steal your lunch money if it detects weakness. The lap will completely reset your idea of the 'Ring. TheBMW Ring Taxi is booked out a year in advance, but something as meek as a Suzuki SX4 will deliver an unforgettable romp. And that Nissan GT-R in the fleet probably needs some love...

Do not drive your rental car on the 'Ring

If you must drive your own car

First, forget about christening your new BMW or Porsche for which you paid for German delivery: cars with export plates are banned on track. But if you have a car that's allowable, know that onboard still and video cameras are verboten; if you want a photo, buy a shot from one of these pro photogs. Go for enjoyment, not lap times, and give you and your car plenty of time to cool down between laps. If things break, get them fixed here. If you crash at the 'Ring, you pay for any damage to "the verges, the fences, the crash barriers or any other Nürburgring property." If the marshals need to close the track due to your boo-boo, you pay for the the closure, too. If your car limps around the track leaking fluid and that leads to a multi-car crash, your bank account will get beat like a goat. So go for enjoyment, not lap time. Or:

Those same folks who gave you a shotgun hot lap will rent you a track-prepped road car with all the insurance trimmings in case you cook your goose over Pflanzgarten. We strongly advise you restrain any testosterone-fueled impulses and go for something slow, but Rent4Ring, RSR Nurburg, and Rent Race Carcan get you into anything from a Renault Clio R.S. Trophy to a Ferrari F12 Berlinetta.

Keep an eye out for Easter Eggs

Germans love old American metal. On a recent trip, we spotted among the hulking masses a sweet Hudson, several early Mustangs, a convertible Eldorado, a rundown Buick Century, and, in a ‘Ring garage, this Dodge Magnum Police Cruiser from Bridgeport, Connecticut. Totally cool. Totally confounding. Just like the 'Ring.