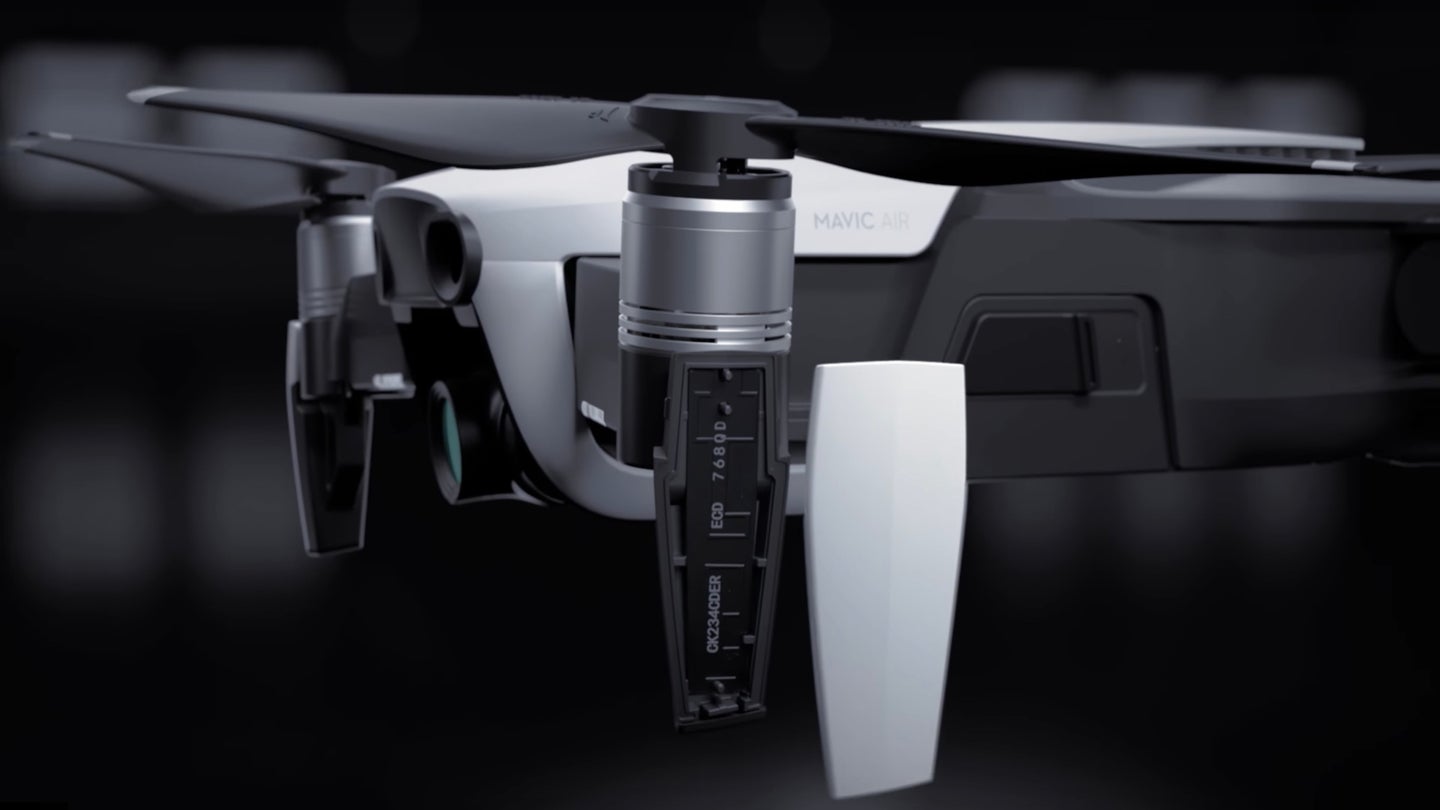 Last week, drone manufacturer DJI released a teaser trailer for a special announcement to be made Jan. 23. While we were chomping at the bit to know everything about DJI’s new unmanned aerial vehicle, it was exciting to not to have the full picture yet, though we did manage to guess correctly. Welcome, DJI fans, to the Mavic Air, a new and improved version of the 2016 Mavic Pro and 2017 Mavic Pro Platinum predecessors.

Announced at a DJI event in New York City Tuesday, the Mavic Air seems to be a thoroughly refined model that combines the best of both the 2016’s DJI Mavic Pro and 2017’s DJI Spark drone. According to DJI, the Mavic Air is primarily an “ultraportable” UAV capable of recording 4K footage and 32-megapixel sphere-photographs throughout a 21-minute flight time. This is a huge improvement in contrast to the DJI Spark which is capable of shooting footage in 1080p and taking 12-megapixel photos. Similarly to the previous iteration of the Mavic, the Mavic Air folds up, providing for its “ultraportable” nature. Perhaps most welcoming is DJI’s price-point for the Air, putting it between the $499 Spark and the $999 Mavic Pro. That’s right, the Mavic Air not only goes on sale in a mere five days, it does so at a respectable price of $799.

According to The Verge, the Mavic Air weighs almost half as much as the Mavic Pro and folds into itself more compactly than the Spark. Unfortunately, it doesn't quite reach the Mavic Pro's 27-minute flight time or the Mavic Pro's 30-minute flight time, but definitely outdoes the Spark in that regard, by a full five minutes. Essentially, DJI is trying to juggle sophisticated technical specs with an appealing consumer price-point with the Mavic Air. While this new and improved UAV seems to hue closely to its more professional, technically proficient drones, the company is clearly also focused on retaining a portability aspect and price-point appeal reminiscent of the DJI Spark.

The company has essentially become the world's leading drone-manufacturer and is extremely popular with both recreational and professional UAV consumers. While some may scoff at spending $800 on a drone, they may be uninformed as to the technical specs here, or that DJI knows exactly what it's doing. It certainly helps that GoPro announced its departure from the drone industry earlier this month.

Here's a look at DJI’s Mavic Air. First, a video introducing the drone and its capabilities, followed by a video touting the Air's "elegance and power."

According to The Verge, the Mavic Air shoots 4K video at 24 or 30 frames per second, using a 1/2.3-inch sensor, or 12-megapixel photographs, all accomplished through a wide angle 24 mm f.28 lens. This thing can fly at up to 42.5 mph while battling winds of up to 22 mph speeds. DJI fitted the Mavic Air with a new antenna, too, providing you with a range of up to 2.5 miles. In addition, in order to forego any future overheating issues, DJI re-designed its ventilation system, which should put those traumatized by drones shutting off mid-flight at ease. There's a new 3-axis gimbal, as well, which suggests even more stabilized footage than before. In addition to a new remote that has an integrated screen, the Mavic Air's seven embedded cameras provide for a thorough obstacle avoidance system.

DJI's Mavic Air might be the drone for you if you're in the market for a new, lightweight, foldable UAV capable of recording pristine 4K footage. Of course, the Mavic Air also takes slow-motion videos, can track and follow subjects of your choice, shoot in various all-too-familiar cinematic shooting modes, and is compatible with your DJI first-person view goggles. Ultimately, the Mavic Air seems like a welcome upgrade to the Spark, and a compact, refined version of the Mavic Pro. Though some of the specs here don't quite reach the Pro tier, the lowered price-point and refinements do make this feel like the most cohesive drone of the bunch. Stay tuned, as we may have a hands-on review for you, soon.