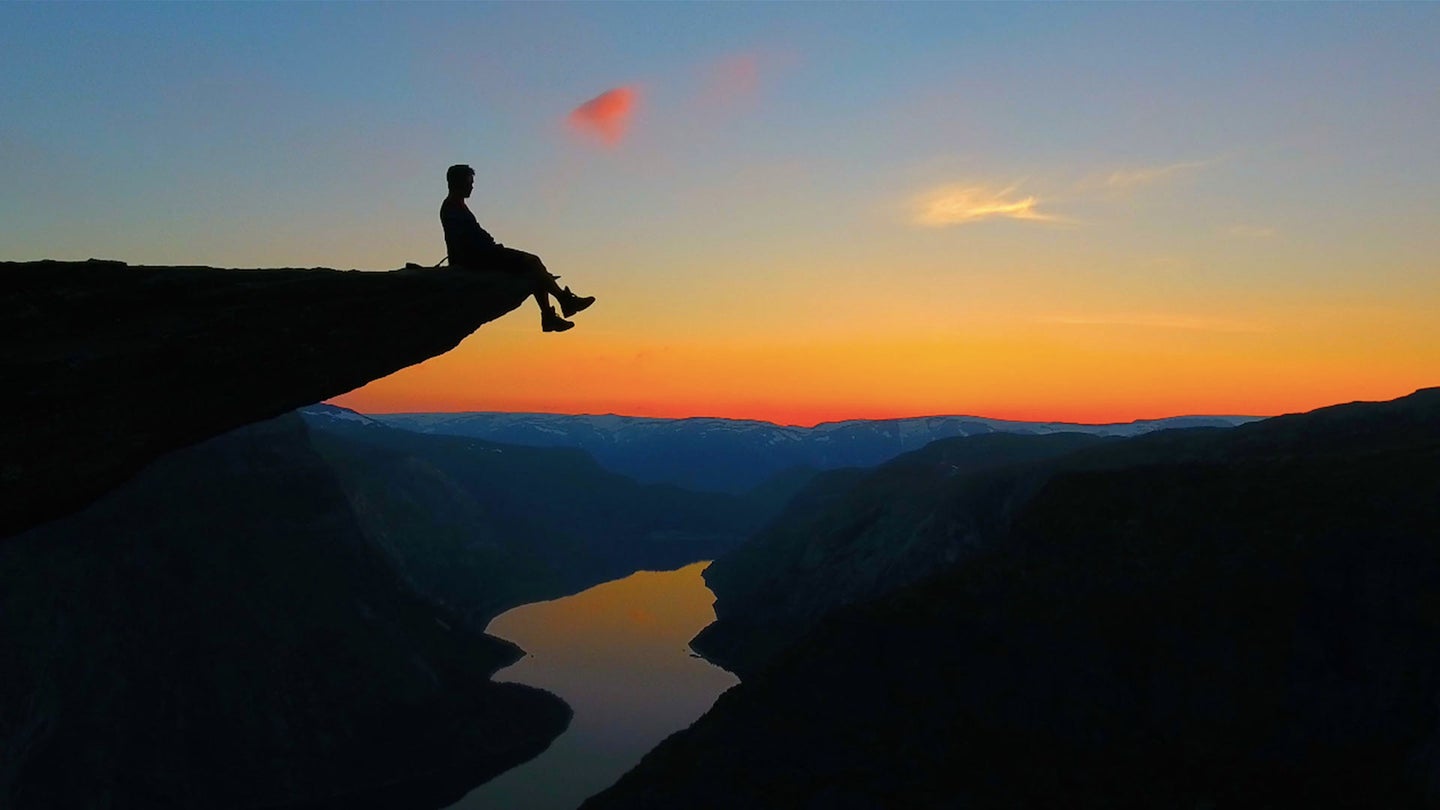 Drones are hotly debated as often as they’re used. Whether police should be using unmanned aerial vehicles to more effectively do their jobs while encroaching on privacy rights, or be used on the battlefield to decrease loss of life while removing the face-to-face element of war, or whether flying your drone in the park should be prohibited, there’s a solid argument to both sides of each single discussion. I think what we can all agree on, at long last, is that giving someone the chance of seeing a place they love and cherish, one last time before heading into the Great Beyond, is a priceless gift worthy of our support.

The Flight to Remember Foundation strives toward that ideal without compromise, as the nonprofit organization brings these opportunities to hospice patients all across the country. Patients are transported from their difficult realities, even if just for a few moments, to places they’ve always wanted to visit, or return to, all via camera-drones, from the comforts of their beds.

Chairman and founder, Tom Davis, conceptualized this company in 2015 and officially formed it two years later. The nonprofit is currently amassing a crew of drone pilots, reaching out to hospice institutions across the country, and doing its best to raise the funds necessary to bring the momentary yet significant joy of virtual travel to patients in need of a reprieve. For some, it’s the only way they can leave their rooms, making drones the most effective and rewarding tool to do so. As the organization’s website explains, imagine “You may never be able to see your neighborhood, your favorite fishing spot, the park where you played with your children, your church, or even the beach where you spent summer vacation with the family.” This is a hard reality to face, and there’s no reason that we can’t do something about it in 2018, where camera-drones are affordable, and capable pilots are on standby. Davis thought so too and he actually did something about it.

In case you’re wondering how exactly the Flight to Remember Experience unfolds, it’s more collaborative and engaging than simply ordering aerial footage of a selected destination. According to the website, once a patient has selected their area of interest, a pilot, time and date are assigned. The great thing here is that the pilot on-site with the drone is in direct communication with the patient and their loved ones, which allows for them to give the pilot directions. That means the patient could ask for one last flyover, or to head toward that hill they used to climb as a kid, or to cruise toward the sunset straight ahead. It makes a difference, to not only see it all happen live but to be part of the navigation itself. This is where The Flight to Remember Foundation really stands out from an online search for aerial footage. It’s personal.

The idea came to Davis organically, when a friend’s six-year-old relative was battling cancer. She was going to miss out on a field trip and was sad to miss it. “All of a sudden it clicked…I said that we could take her on the field trip, virtually, and she’d be able to see all her friends, hear what was going on, and see the park where it was being held, while she watched safely from her hospital room…the concept was something I couldn’t stop thinking about.” The very same night, Davis conveyed this idea to his wife, and realized that if he “could use drones to virtually transport these patients to a meaningful place via the live stream, we would be able to provide a type of palliative care.” He immediately contacted a slew of hospices, with only The Hospice of The Western Reserve of Cleveland in Ohio providing a response. Since Davis had personal experience with this nonprofit hospice where his grandfather spent his final days, he was excited by their support. After the first successful Flight to Remember Experience, Davis was hooked. “After that,” he said, “I knew this was something I had to continue to pursue and share with as many people as possible.”

Davis has been flying drones recreationally for almost four years now, and even piloted all Flight to Remember UAVs personally during the foundation’s initial year, in addition to providing these “experience for personal friends, which has (sic) been some of the most special experiences.” However, it seems as though Davis gleaned the most from the very first official Flight to Remember flight, which has his wife manage the live stream from their laptop, and Davis maneuvering the drone. The patient was an old woman who had gathered three generations of her family in the hospice room for this moment.  “I was extremely nervous!” Davis admitted. Then, suddenly, after all the anxieties that come with the preparation and the desire to get such an important moment right, “It worked! They were seeing everything perfectly. We flew over the beach, the boat docks, and via the cell phone they directed me to find a hill where she used to go sledding in the winter as a young girl.” This is where Davis solidified his certainty for making this lifestyle-enhancing UAV foundation his ultimate purpose. “It was a surreal experience. It was very positive and yet very emotional. The patient and the family couldn’t believe they were seeing this place that meant so much to them,” said Davis. “Everyone was laughing and crying, including my wife! After that I promised I wouldn’t make her ever do that again!” Davis joked.

The Flight to Remember Foundation has completed more than 30 successful experiences, with five of those using a pilot from DroneBase, the CEO of which, Dan Burton, has become Davis’ partner. While the current goal for the foundation is “developing our pilot network,” which has already spanned more than 20 U.S. states, the next twelve months will be focused on expansion, “to scale out region by region.” There’s usually a volunteer willing to assist the foundation in its missions, but short of that happening, the FTR foundation has “leveraged the services of DroneBase,” which “has been able to provide pilots who are highly qualified and provide a very quick turnaround,” Davis explained. One of those instances revolved around a patient in Wales, U.K., for which DroneBase was able to provide a pilot within a day. This particular Experience consisted of recorded footage instead of the usual live experience, but it goes to show how determined this nonprofit really is. “We were able to provide the Flight To Remember…for this patient and their family very fast even when it was all the way across the Atlantic Ocean!”

When I prodded Davis about the potential for this essentially humanitarian service in the digital, modern era, and the possibilities of expanding to smart-TVs across the country and possibly creating an app that could order and schedule a flight to the TV into your living room, he admits that this is a rabbit hole he has considered quite a bit but one he can’t focus on at this juncture. “I have spent a great deal of time thinking about the many applications of the drone live stream capabilities, but I’ve decided to focus on the life enriching experiences for patients.” Though many of us would certainly be drawn to purchasing our own virtual flight experiences from the comforts of our couches or computers, Davis’ focus on patients and terminally ill individuals is an admirable boundary worthy of respect and support. “I personally have seen the amazing impact this experience can have on a patient and their family. It is truly Priceless! There is no other way for a patient to visit these special places and see the amazing views the drones provide and we can help so many people at a time they need it most. Many times we are granting someone’s dying wish to see their home of fifty years one more time or their church where they were raised, married, and brought their family to,” he said.

Helping someone you love transition from a place of hope to one of resignation is one of the hardest things one can do. The hardships on both sides of such a situation are often repressed or forcibly ignored. We don’t like to talk collectively about certain struggles, sometimes. What The Flight to Remember Foundation offers is a momentary dream that can bring peace, gratefulness, even joy, to a patient and their family. While much of our world is divided into teams, parties, and the seemingly required yin and yang of everyday life, this much we can surely all agree on, the act of giving someone you love one of their last beautiful experiences should be championed. Tom Davis and his foundation may seem like just another entity creatively using drones to carve out its own niche in this world. But to more than 30 families, at this point, they’re a very special type of hero.

If you’d like to get involved as a pilot, a volunteer, or donate to The Flight to Remember Foundation, feel free to visit the website. More importantly, keep these people in mind for the future, as somebody you know might appreciate knowing an aerial tour of their childhood home is an actual possibility.