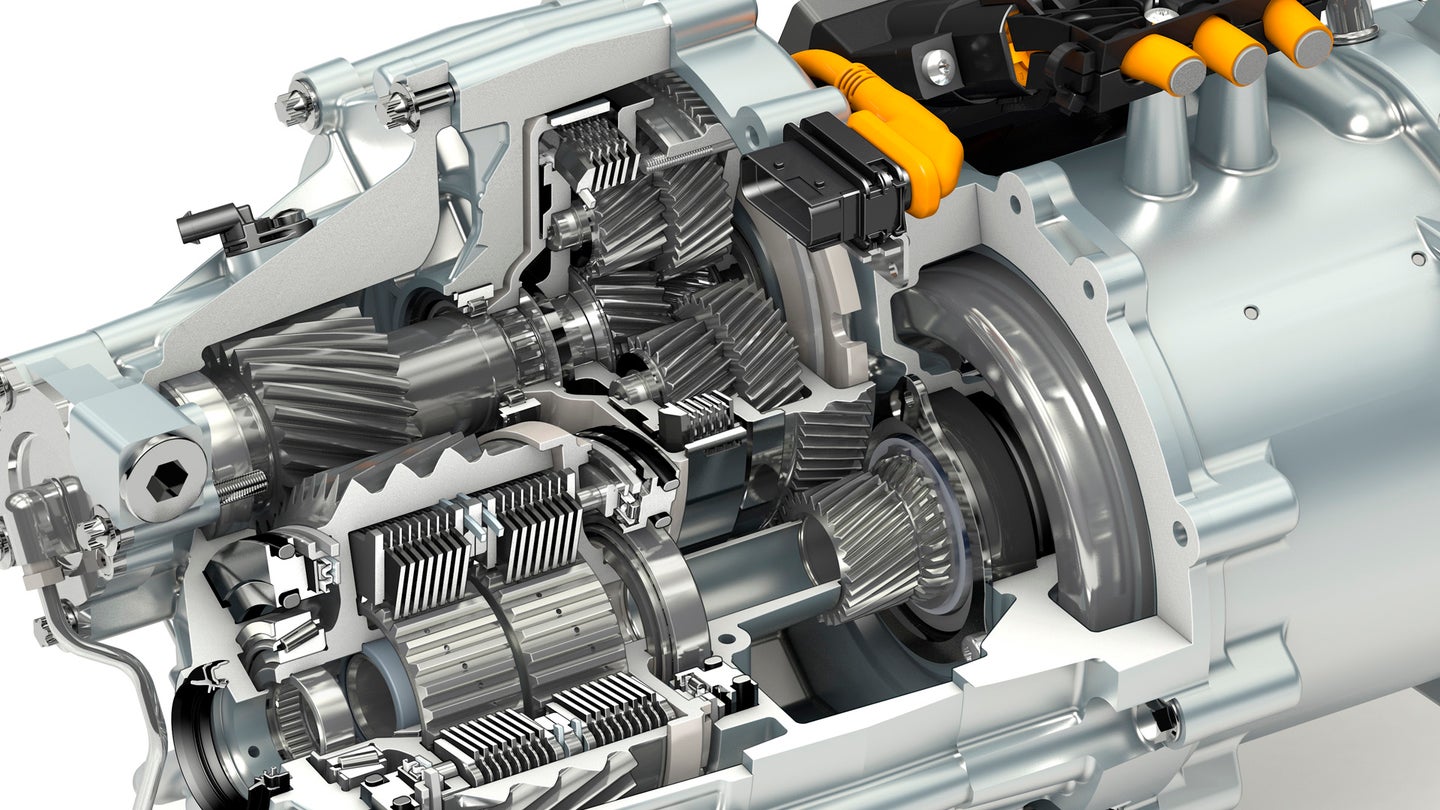 One of the biggest gripes about electric cars from many die-hard auto enthusiasts, aside from not having a manual transmission, is that EVs lose all oomph at higher speeds. While this is true, there's a very easy way to explain reason behind it: The lack of a transmission. Over the past two years, more original equipment manufacturers are dabbling in the world of transmissions for electrified cars, and it's going to change the very way many of us view EVs.

The first time I visited a Tesla showroom, I was pleasantly surprised. Alongside the vehicles that I couldn't afford (but yet was somehow allowed to sit in and play with) was a shrine to simplicity in the middle of the floor. A Model S' soul sat in front of me, a mixture of aluminum and rubber undressed for the world to see. The chassis was stripped down to expose just the floor pan and motor, showing just how everything worked. There was no cramped engine bay, no mess of hoses and plastic. Just metal.

Not only does this simplicity work for aesthetics, but it also works for serviceability. In theory, fewer moving parts in a vehicle means more efficiency. Small parasitic draws caused by engine accessories, thermal inefficiency, engine wear, altitude, and more are removed from the equation. Most importantly, less maintenance and breakable parts are needed in electric cars when compared side-by-side to a gasoline-powered equivalent. One of the most notable parts that is commonly missing from an electric car is something ever-so-common in any gas-guzzler: A transmission.

Simply put, most modern battery-powered cars just haven't had the need for additional gearing. Electric motors can typically spin upwards of 20,000 rpm, while gas-powered engines found in new cars typically rev far less than that. Thankfully, electric motors are extremely efficient powerhouses so the same amount of torque can be produced at 1 rpm as the motor makes spinning at 20,000 rpm. Using carefully calculated gear ratios, it becomes possible for a manufacturer to maximize efficiency for an electric car without using a transmission to change gears. Unfortunately, this also results in the overall top speed of the car being reduced in order to compensate for an evenly spaced amount of power.

Gasoline powered cars are approached slightly differently due to their power bands. Generally, a car running on petrol will have less efficient low-end ranges, meaning that less torque is made at 1,000 rpm than at 7,000 rpm. This torque curve is a resemblance of overall engine efficiency, indicating that a motor is less efficient lower RPMs as the driver requests heavier throttle to get up to speed, one of the reasons which hypermilers will quickly row through their lowest gears to get up to cruising speeds and out of an inefficient part of the power band. To combat a constant struggle for power and reduce wear on high-revving engines, engineers determined that a set of variable gear ratios would best enable a car to travel quickly at lower speeds while being able to efficiently operate at highway speeds as well. Thus, the transmission was born.

So if simplicity is the key to developing desirable electric cars, why add a layer of complexity with a transmission? Over time, simplicity becomes secondary to efficiency. The simple engines of yesteryear have been replaced with more fuel-efficient and powerful units, which, despite the technological advances made in the past decade, are beginning to be phased out in favor of electrified platforms. Now, manufacturers have found a way to make those electric motors even more efficient and appealing by bettering the range and usable power of EVs without increasing charge time or even battery capacity.

Companies like engineering firm GKN and renowned transmission-maker ZF have already been hard at work making this a reality. Using a transmission like GKN's eTwinsterX, an electric car is equipped with a secondary gear ratio. Using the second reduced ratio, the efficiency range of the vehicle is effectively widened, which means that it moves the top speed of the vehicle higher without spinning the electric motors faster or using more electricity. This is because the motor is spinning at lower RPMs, reducing the amount of current needed to drive the motor and significantly increasing range by maintaining the "sweet spot" areas of efficiency for longer periods of times. Additionally, range is improved at highway speeds by reducing parasitic losses due to aerodynamic drag, thanks to a more sustainable gear ratio.

It's very likely that Tesla has also begun to look into the production of a multi-gear transmission for its platforms, especially for its next-generation Roadster. During the unveiling of its all-electric Semi, Tesla also happened to show off its newest sports car which claimed not only an unheard of acceleration from zero-to-60 miles per hour in 1.9 seconds, but also a top speed of over 250 mph. Both of these seem unachievable using a single speed gear ratio, which hints at an internal project developing a transmission for Tesla, something which would also explain the 620 miles of range in a seemingly small platform.

Though details on development have been slim, we know that both GKN and ZF have been working on different designs to integrate into vehicles before 2020, ZF even stating that one European manufacturer would be starting production using its units in 2018. In one of GKN's test mules, the company installed a 35 kWh battery to trial the efficiency of the transmission. Though no actual numbers were given, Peter Moelgg, the president of GKN's automotive engineering department, claimed that the company could help to "do better than 400-kilometer to 500-kilometer" (250 miles - 310 miles) of range.

As electric cars increase in popularity, development of these vehicles will also continue to increase. More efficient cars with longer ranges and shorter charge times are just the beginning of what is to come. Thankfully, with interest from manufacturers in the automotive industry fortifying the future of electric cars, it's just a matter of time before we begin to see drastic improvements.