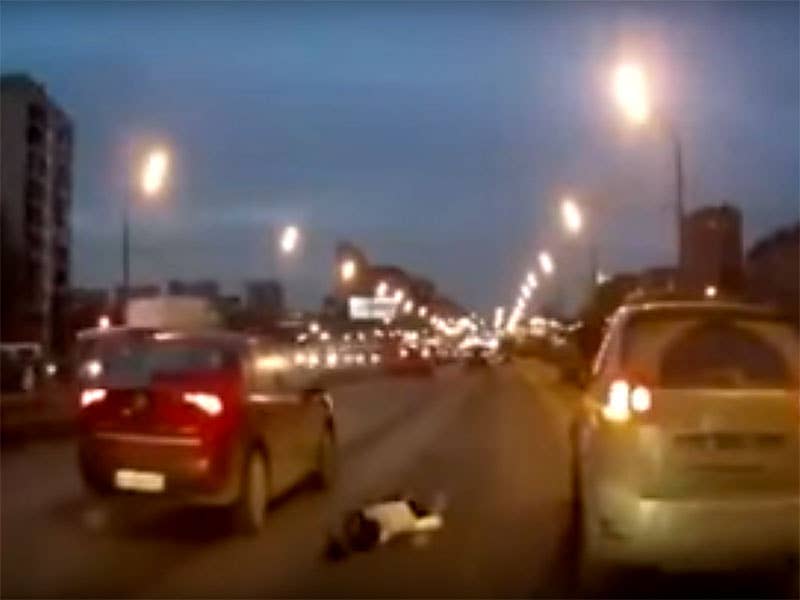 A long day at work can leave you pretty drowsy, so it is understandable that some people may need to pull over and get a little shut-eye on the drive home every now and again. Unfortunately, not all motorists are graced with the gift of rational thinking, and the driver in this video is apparently among those afflicted. Rather than pulling over and taking a nap in a safe location—let alone on the road shoulder—this sleepy beauty decides to take a load off smack in the middle of the highway.

Instead of suffering the same fate as Squirrely the squirrel, two men assisted the seemingly disoriented driver back into her Lexus SUV.  Although we don’t know exactly why she suddenly decided to have the briefest of cat naps in the middle of a highway, we can take a few guesses:

1: She realized she was driving a mid-2000s Lexus RX 350, and couldn’t imagine driving it for one more second.

2. Her name is Fanny and, having listened too closely to The Band’s “The Weight,” decided to follow the lyrics’ advice.

3. She wanted to become famous, so she stepped out in front of a random car knowing that in Russia, you’re one dashcam video away from infamy.

4. She had just finished a rom-com viewing marathon heavy on Kate Hudson films, and assumed this would be a novel way to meet Mr. Right.

5. She is secretly from Boston.

Whatever the case, she was definitely not thinking rationally, and we hope that whatever compelled—and may continue to compel—her to make impromptu stops on busy highways is dealt with in short order.