The Vanderhall Venice Is a Morgan for the Masses

The Venice is an American-made three-wheeler for American tastes. 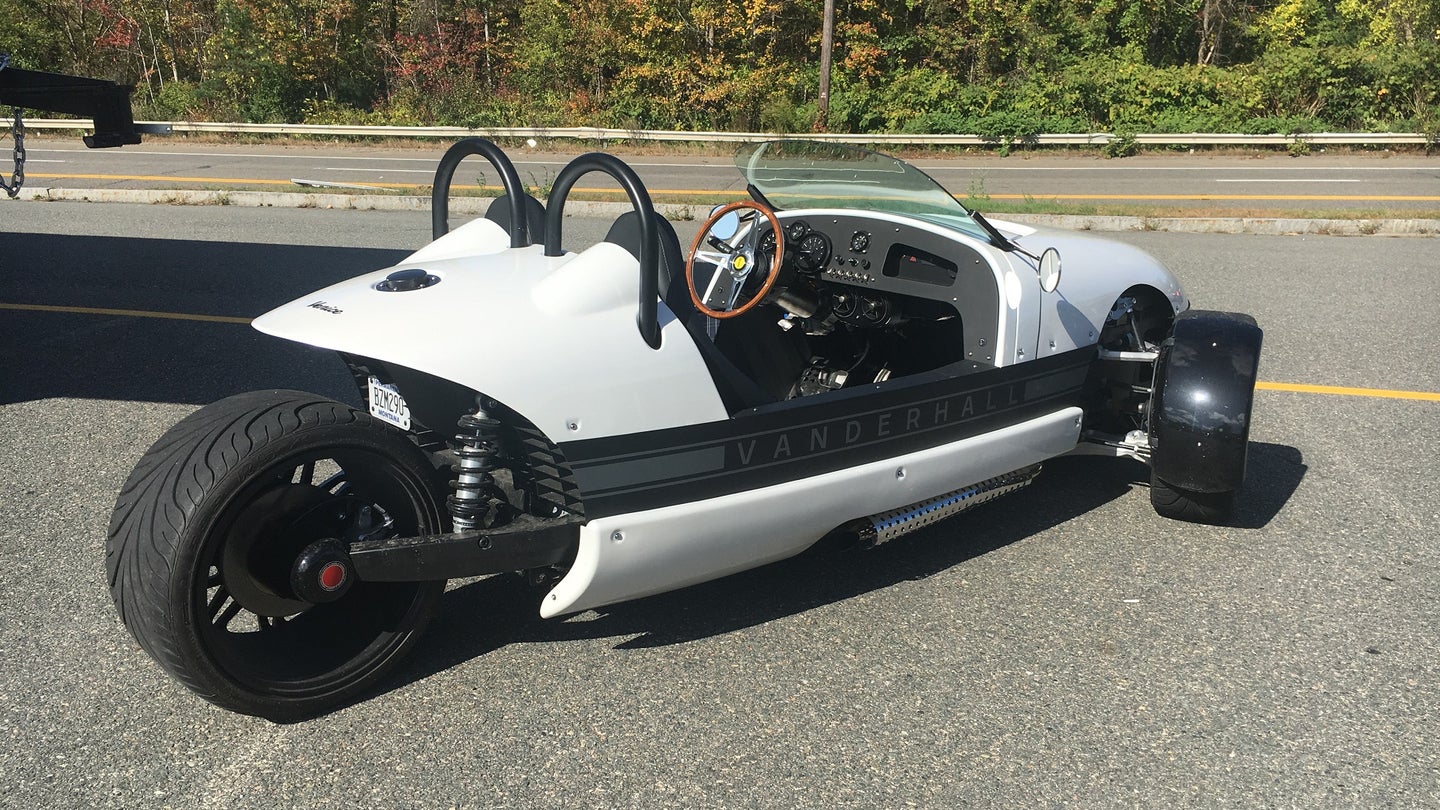 Welcome to Critic's Notebook, a quick and off-the-cuff car review consisting of impressions, jottings, and marginalia regarding whatever The Drive writers happen to be driving. Today's edition: the 2018 Vanderhall Venice.

According to Alex Roy, the Vanderhall Venice is junk, and the Morgan 3 Wheeler is better. Not that he's biased, of course. I just had a chance to try one out for myself during a Vanderhall demo day at Mom's South, currently the only Vanderhall distributor on the east coast. (Correction: Despite Mom's South's claim to be the only one, Vanderhall says they actually have ten east coast dealers.)

If you didn't like my esteemed colleague's answers, here's a second opinion.

On the surface, the Venice and the 3 Wheeler look quite similar, with two wheels in front, one wheel in back and no roof. That's where the similarities end. While the Morgan uses technology from a bygone era, the Vanderhall looks and feels modern with just the right amount of retro. The view from the front reminds me of the Lotus 7 from the beginning of The Prisoner. The exhaust on either side looks great but is recessed underneath so that you can't burn yourself on it. A single swingarm holds the massive wheel with a wide 295/35 R18 tire on the back. All of the lights are hidden behind grills and cowls, adding to the vintage racer look.

The modern/retro theme extends to the cockpit of the Venice, which I can't really call the interior because it's exposed to the elements. A thin wooden steering wheel harkens back to the vintage racers that inspired it. It does not include an airbag since it is legally considered a motorcycle with less than four wheels (seat belts are included). The gauges and controls look retro, but the heater actually works, as do the heated seats. At my height, the top edge of the windshield was right in the middle of my line of vision, distorting my view of the road slightly unless I tilted my head above or below it. The windshield is not adjustable but next year Vanderhall plans to add a tilt function to the seats to help drivers avoid this problem.

The chrome shifter sticking out of the side looks and feels great as well, almost fooling you into forgetting that the Venice has an automatic transmission. Huh? What sacrilege is this? A sports car that only comes with an automatic? The Venice's drivetrain comes from an unlikely donor: the Chevy Cruze. Rather than the diesel, the Venice gets the gasoline-powered 1.4-liter turbo four-cylinder engine and six-speed automatic transmission. "We are enthusiasts as well, but we are also a boutique manufacturer," said Daniel Boyer, Vanderhall's director of sales and marketing, in an email. "We offered a pre-order option for a manual alongside our auto and it represented less than seven percent of orders. From an assembly line standpoint this was not sustainable as it would have been pretty much a separate model assembly-wise and so we pulled the option. The shifter placement was also awkward, up on the dash, Civic style." And honestly, on the test drive, the automatic transmission didn't bother me at all.

In the Cruze this engine generates 153 horsepower, but it's been increased to 180 hp in the Venice, with 185 pound-feet of torque. This still may not seem like much. The Toyota 86 and Subaru BRZ have slightly more horsepower, yet are often criticized for being underpowered. But considering that the Venice weighs only 1,375 pounds—half the weight of the Toyobaru—it gets out of its own way just fine, with an estimated 0-60 time of 4.5 seconds and a top speed of 130 miles per hour.

None of these statistics were relevant for my purposes, a supervised demo drive with a salesman sitting next to me. No shenanigans here. Though it was tight, the two of us fit in the Venice much more comfortably than Alex Roy and Zack Bowman fit in a Morgan. While the exhaust note was no rumbly V-Twin, the whooshes and swooshes of the barely muffled turbo were music to my ears, particularly because the exhaust exits right under the occupants' ears. I'd like to hear the engine itself more, but I would get terrible fuel economy in the Venice because I'd be constantly on and off the gas, spooling the turbo then releasing boost through the blow-off valve just to hear it.

I absolutely could not tell the car had only three wheels while I was driving it. Not that I drove it hard at all. And that, right there, seems to be what the Venice is going for. It feels like a Morgan for the masses. It has all of the weird uniqueness of a three-wheeler like the Morgan, but with modern amenities such as legroom and heat. It is not deserving of a bumper sticker I once saw that read, "All parts falling off this car are of the finest British manufacture." That's both because the Venice won't fall apart and because it's not British, but American, built in Provo, Utah.

But it's also intentionally not as modern as the Polaris Slingshot. It has touches like the old-school toggle switches on the dashboard rather than a modern infotainment system, and the thin wooden steering wheel that you'd never get on any mainstream modern car. I'd say that in the Venice you get about 90 percent of the experience of the Morgan for 50 percent of the price, which starts at $29,950.

Alex Roy will no doubt tell me I'm wrong, and that's fine. He's a die-hard enthusiast, and for him, the Venice is junk, and the Morgan is better. But for people who want a less expensive experience like the Morgan without its quirks, the Vanderhall is an excellent choice.