We can’t decide if this bumper says ka-chow,’ ‘bazinga,’ or ‘kill me.’ 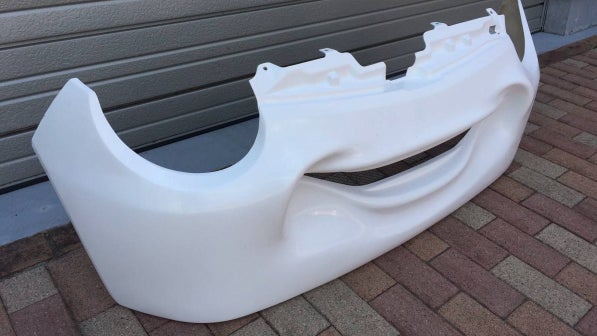 I like Disney-Pixar's Cars as much as anyone does. Maybe more, even, considering I waxed lyrical about the film's themes and setting back in June, to the tune of nine paragraphs. With that said, I have never felt any desire to drive, own, or even look at the film's andro-mechanical characters in any setting beyond the big screen. Some folks in the land of Japan, however, feel otherwise, and concluded that the Suzuki Twin—the first hybrid kei car and a Smart ForTwo doppelgänger—needed a Cars-esque, mouth-shaped front bumper that makes the Twin look even more like a person who has just cleared their first bong.

The kit is listed as a "smile bumper," and while it may make both the car and its owner smile, that's far from the effect it has on me. Its features are just human enough to put it in the uncanny valley, a hypothesis that more or less posits that when something looks almost, but not quite human, we find it creepy. This bumper completes a face that falls right into this category for me.

Things improve markedly once the car is stationary, and a Cars-themed sun shade is propped up in the windshield. Whilst roaming the roads, though, it looks more like this.

Translating the auction listing reveals that its seller describes it as "cute," and suggests that owners can install LEDs in the "mouth" of the bumper, a look already proven unsettling by Rammstein. We already know that Japan has a definition of cute that differs from that of the western world, but this pushes the boundaries into more exotic realms than we could have imagined possible.

A concern I have about this open mouth is what happens when an animal makes a poorly-timed road crossing ahead of it. Does the car end up with roadkill spilling out its still-grinning gob? It's an image I hoped is never realized. You know, for the children.

It is priced at ¥64,800, or $577.31 at current exchange rates with U.S. dollar, and two days remain in the auction listing, with no bids placed. Maybe if nobody buys it, the bumper will disappear forever. One can only hope.

This Futuristic House Was Built Around A Vintage Porsche