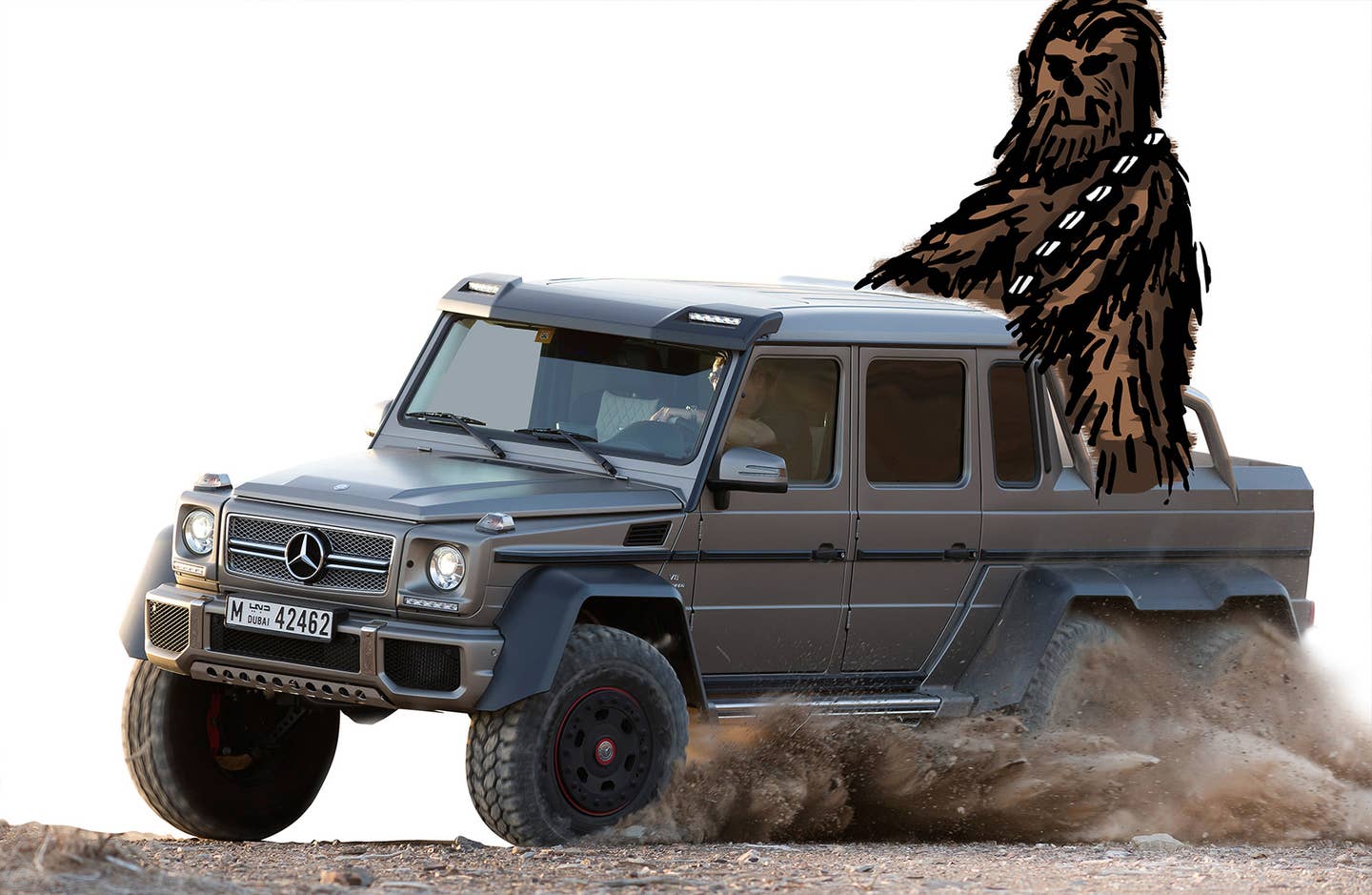 It wasn’t just a dark time for the Rebellion when The Empire Strikes Back hit theaters in 1980; it was a dark time for car lovers, too. A new regime of fuel-economy and safety regulations enacted around the time of the original Star Wars ensured that—apart from the occasional exotic—new cars were predominantly slow and ugly.

But while the four decades since haven’t been kind to George Lucas’s neck, they have been very good to gearheads. Compared with the cars of the late Seventies and early Eighties, today’s vehicles seem as powerful as Star Destroyers, as smart and dexterous as droids, and as sexy as Princess Leia in that gold-and-brown bikini.

So in honor of the latest installment in the series—it’s called Star Wars: The Force Awakens, maybe you’ve heard of it—The Drive has spelunked into the past of that galaxy far, far away to consider just what contemporary cars some Star Wars characters might drive… if they didn’t have access to airspeeders and Imperial hardware and the like.

(Also, please note that we’re refraining from dignifying Adam Driver’s new Star Wars character, Kylo Ren. This has less to do with the fact that we haven’t seen The Force Awakens as much as we don’t particularly enjoy watching Girls.)

Have any suggestions for characters we didn’t touch on? Let us know in the comments below.

As one of the galaxy's most talented pilots, the man who once went by Anakin Skywalker would certainly want something fast, agile and frightening as hell to drive. His custom TIE fighter shows his preference for unique machines, and it's hard to get more unique than the Cinque Roadster—only five were made.

Chewbacca has a history of using impractical-yet-badass equipment—witness his choice of a bowcaster over a blaster. No other vehicle in the galaxy represents Chewie’s personal blend of size, strength, and silliness than the six-wheel-drive G63. Plus, that V8’s growl would sound right at home on Kashyyyk.

Bulbous little droid, meet bulbous little car. They’re both cute. They’re both obnoxiously slow. They both come in attractive two-tone color schemes. They practically share a naming convention. And let’s not lie, you basically need to be the size of an astromech droid in order to feel comfortable in the damn car.

For all his heroism, Luke was always pretty vanilla. He left the quippy one-liners and raffish charisma to Han, instead going about his duties in a fairly nondescript way—and yet, he wound up being incredibly popular. Just like the Toyota Camry. Also, the early versions tend to whine a lot more than you remember.

What sort of car does a giant predator on an icy planet need? Well, something with great traction. Something with plenty of cargo space to haul tauntaun carcasses back to the cave. And something fast enough to outrun those annoying human Rebels and their airspeeders. Enter Jon Olsson’s 950-horsepower RS6 Avant.

Yes, we know the car was burned to a crisp a few months ago. But we’re talking about a 500-lb snow monster driving it around a frozen planet in another galaxy. Just suspend your disbelief a little bit further.