When Was The Last Time You Saw Your First Car?

It may have been last week, last month, last year, or even last century. But nearly everyone remembers when they saw their first car for the last time. 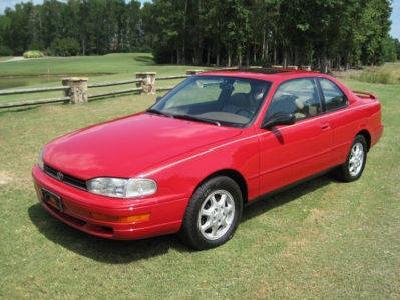 My daily driver for the last 11 years, a 1994 Toyota Camry LE Coupe, was on my driveway for the very last time.

A sharp dressed fellow had come by to look at it, and he must have asked at least 20 questions between the test drive and the signing off of the title. My Camry had 235,000 miles, and other than a nasty scratch on the passenger door and a bit of paint fade, it will still in excellent shape.

My sales pitch to him was a wet dream for Toyota tightwads.

"I kept up with everything. The oil I changed every 3,000 miles. The air filter every 15. The tranny fluid and fuel filter every 30, and the Michelin tires should last you until the odometer gets to 280,000 miles. By then you'll want to replace the belt and water pump because they will be due too."

I maintained that car better than most potheads maintained their plants. I'll put it to you this way, That nutty guy you always see at a gas station who raises their hood and checks everything underneath their beater before the gas gauge is full - that was me.

The Camry was the first and only new car I ever bought. Like everyone else who plans on keeping their big ticket purchase for a lifetime  I had a 20 year plan set in stone for my first car. But then that earthquake called change happened and that Camry went from a daily driver to a perennial garage queen.

I made a career change, from working as a painfully unhappy financial analyst who made numbers dance on a computer, to a numbers chanting auto auctioneer who traveled the country liquidating cars. I did three to four sales a week from coast to coast while my Camry took a quick weekly drive and then sat parked at a nearby airport.

Then I started buying cars on the side. First once every month or so, then once a week, and finally well over three to four a week. Before I knew it, that Camry was parked for months on end. I was spending my free time on airplanes between auctions trying to devise Craigslist ads that would move every piece of rolling metal I now owned - other than that Camry.

In the summer of 2005 I saw that Camry leave my driveway for the very last time. One Craigslist ad. One sunny day. One interested customer with cash in hand. That was all it took. I had twenty-five hundred dollars in my picket and the new owner had my old set of keys along with my once prized machine. 12 years later it's still on the road with over 350,000 miles.

That's my story. What's yours?