This Is What It’s Like to Drive an IndyCar

Ride along as we rip around Indianapolis Motor Speedway at 140 miles per hour. 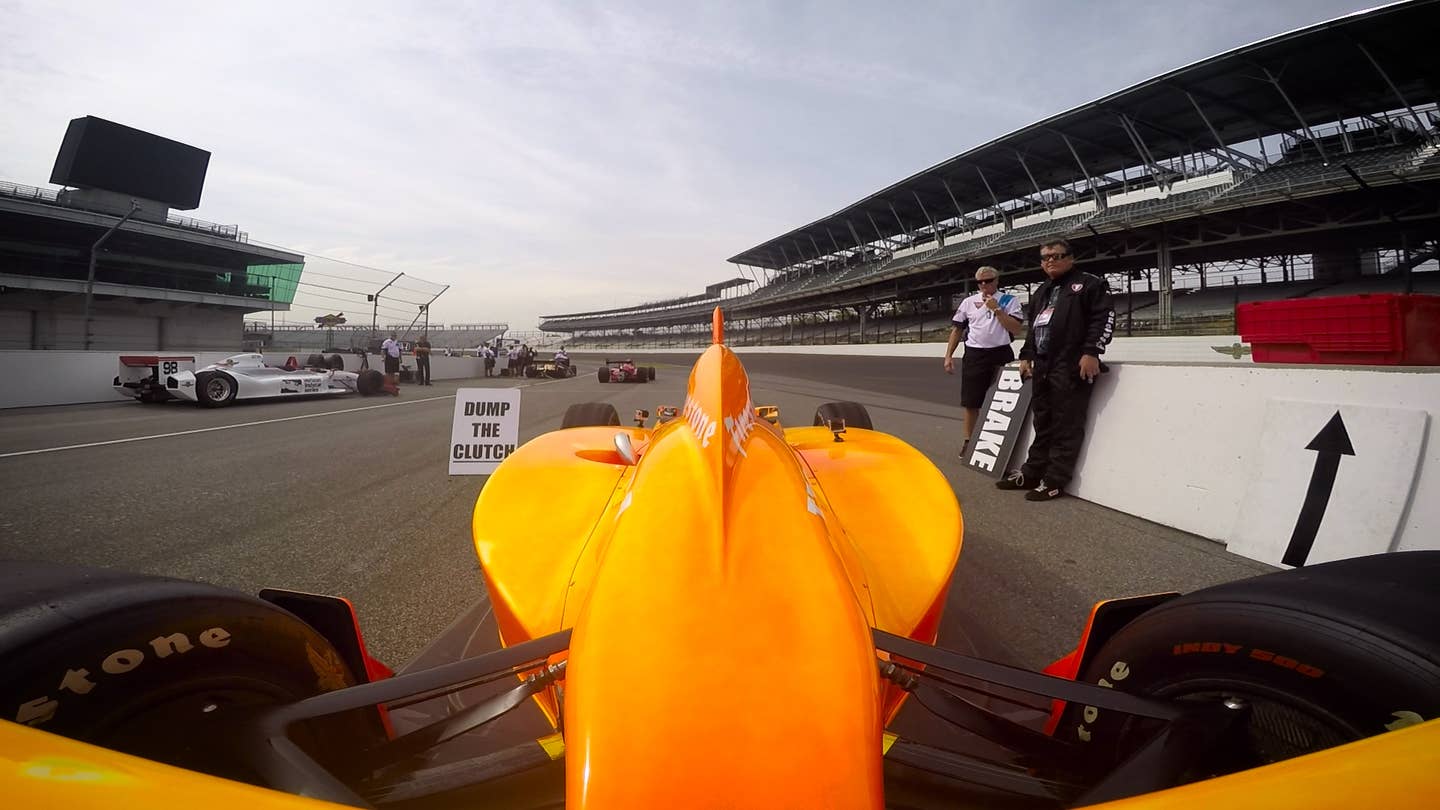 I was slightly late when I arrived at the Indianapolis Motor Speedway on a stunningly hot July morning and dashed to a small tent at the end of pit row. Enjoying the shade, a pleasant lady flashed me a broad smile. “IndyCar experience?” she inquired. Yes, ma’am. Two pages of waivers later—including a lengthy grim section about blood types and emergency care directives—and I was shuffled into a trailer to tug on a firesuit and race shoes. Two months earlier, I’d never even watched an IndyCar race; now, I was about to drive an IndyCar around the famous oval.

I became hooked on the IndyCar series back in May. Firestone brought me to Indianapolis for a two-seater ride with Mario Andretti; two weeks later, I went back to experience the 100th running of the Indy 500. Enthralled with the racing and as the storied track itself, I begged anyone associated with the series to let me have a crack at driving a proper Dallara car around the IMS circuit, and the IndyCar Racing Experience answered my pleas. The same group that puts you in a two-seater with a professional driver will also let you drive three laps in a Honda car at a number of IndyCar tracks. Bless them.

Properly dressed in racing gear, I moved into the garage for a quick instructional session. There, fellow participants milled about, equally suited and booted. The small group consisted of a Colorado woman who'd booked her father—and herself—a seat for his birthday, and Rodney, a Midwestern man who’d brought his father and older brother along. “This is my third year,” he beamed. “I save up every year to come back. It’s worth every penny.”

At $1,000 per person, flying solo in an IndyCar is not a cheap endeavor, especially when you consider your time on track clocks in at about three minutes. Paying $333 per minute for anything may seem outrageous, but as Rodney put it, “When you grew up, watching Mario, Dan [Gurney], and A.J. [Foyt] racing this very oval, man, how do you put a price on driving that same asphalt?”

An IndyCar Experience program staffer cut our small talk short when he began to walk us through operating our cars. They were three six-cylinder Hondas that campaigned in the 2005 Indy 500, detuned to make about 300 horsepower, though no one really talks power numbers. The cars are still plenty fast, we were assured. There were photos to illuminate the most important portions of the experience, such how hard to brake, where to find the engine kill switch, and when to dump your clutch. “Follow all my instructions and you’ll have a blast, and my name is Dan. Screw up and you’ll have a bad day...and I’m Steve,” the staffer quipped on our way out to the track.

Rodney ran first. He pushed it hard, nudging closer to the lead car with each successive lap. "He's hauling," nodded Dan-slash-Steve. After coming in and climbing out, Rodney wiped the beading sweat from his brow. “Whoa, boy,” he exclaimed, flashing a toothy grin. “Can I go again?” His father ran slightly slower ("I think he's a bit scared. It's overwhelming once you're out there," Rodney narrated) and his brother jokingly vowed to redeem the family name. The father and daughter finished, flushed and exhilarated, and shared a touching embrace.

"You're up," the crew chief said, clipping me on the shoulder. "Do us proud," Rodney shouted, as I walked to the car. I'll try, sir.

Check out our laps in the video, and watch the IndyCar pros race at Watkins Glen this Sunday, September 4th at 2 p.m. (ET) on NBCSN.

Are IndyCar Drivers Smarter Than a Fifth Grader?

No clue. But apparently they are smarter than Sports Illustrated Swimsuit Models.

This year’s Indy 500 polesitter talks to us about his horrific crash, triumphant comeback and why he has no fear of getting back behind the wheel.

Meltdown leaves Beantown without a race and everyone pointing fingers.