At Ayrton Senna's Crash Site, the Presence of a Racing Giant Is Still Felt Today

Today marks 26 years since Senna died. A visit to his memorial site shows how much he's missed. 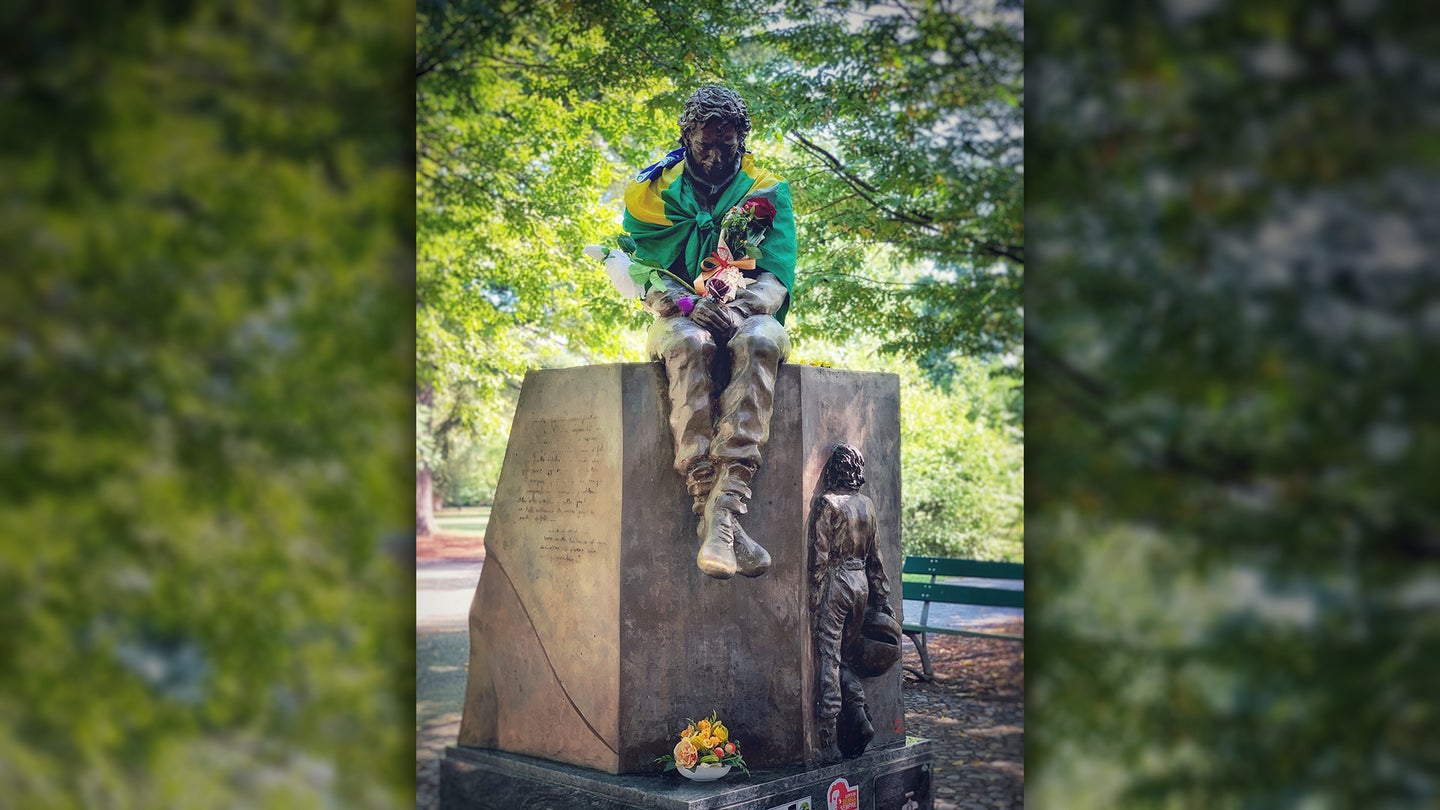 It wasn't until I saw the Brazilian flags and racing mementos scattered along the chainlink fence that I fully grasped what had taken place there on May 1, 1994, and what that place had meant for legions of racing fans ever since. Admittedly, I am one of those fans—I was only seven years old when Formula One legend Ayrton Senna crashed into Tamburello corner on live TV, now 26 years ago—and I live with a head full of sights and sounds from that awful Sunday at Autodromo Enzo e Dino Ferrari in Imola, Italy.

Just a few hours earlier I had embarked on the E35 from Lake Como behind the wheel of my awfully slow Volkwagen Polo rental. I was on my way to Modena for a rendezvous with Ferrari PR folks ahead of the F8 Spider and 812 GTS unveiling in Maranello, but I had decided to take a detour and swing by Imola. It was, after all, a life-long dream of mine to visit the infamous race track named after Il Commendatore and his first-born son.

I vividly recall the deadly crash. There were sparks flying out from underneath Senna's car, and suddenly, he darted off the track at 192.6 mph like a missile headed straight into a concrete barrier. The actual crash, according to telemetry, happened at 185 mph. Debris went flying everywhere, and it even appeared that the Rothmans-liveried Williams race car had bounced off the wall due to the ferocity of the impact.

The real reason why the 41-time Grand Prix winner lost control, to begin with, will most likely never be completely known, but many theories exist. Regardless of the why, the end result remains the same: I watched Senna die on TV as a young kid, but I didn't comprehend it until my father, who was out of town at the time, phoned me to tell me the news. Hell, I remember the brown tile floor I was staring at as I listened to his words. Just like that, my racing hero was dead.

Twenty-five years later, there I was, at the same place I had originally seen on TV, and later on in countless videos and documentaries. I was standing on the infield side of Tamburello, looking across the track and directly at the wall that claimed Senna's life. It was a sunny and breezy Sunday in Italy—are there any other kind there?—and despite there being some sort of motorcycle flea market taking place on the track's paddock area, the rest of the circuit and its surrounding park were deserted. Not another soul in sight.

A path wound through the Parco delle Acque Minerali connecting its many tennis courts, soccer fields, and running tracks, leading me to the only reason why I was there: the Monumento ad Ayrton Senna, a tribute built to honor the three-time F1 world champion who's up there with Pelé to millions of passionate Brazilians. And Pelé's up there right up there with Jesus Christ to them, so you do the math.

My fascination with the polarizing Brazilian was instilled in me by my father, who despite my favoritism of the scarlet cars, would "volunteer" me to read every Senna newspaper and magazine article aloud to him. I really didn't mind. It's not like Ferrari was winning much back then—or at all.

That being said, Senna secretly became "my guy" the first time I saw his bright yellow helmet buzz by before me at the track. He was cool, he was brave, and he didn't have a goofy mustache like Mansell or an ugly nose like Prost (my thoughts as a kid). Plus, he had his own cartoon series called Senhina, of which a comic book was sold in Mexico City, where I lived at the time. He was a giant to me.

So I reached the eight-foot-tall statue of the man himself in Imola, I was mesmerized by all the thoughtful details artist Stefano Pierotti discreetly built onto its facade. A marble base held a column that depicted several milestones of Senna's life, but primarily focused on his victory at the 1991 Brazilian Grand Prix, where he overcame mechanical and physical fatigue and brought joy to an entire country. Prominently above it, a life-sized Senna sat down on the structure with his hands and feet crossed, looking slightly downward and to the right. The artistry behind the now 23-year old statue was impressive, but the realistic face was simply uncanny. It looked like him, and you could almost feel his presence.

I stood directly behind the monument. That's when another detail, perhaps the heaviest one, dawned on me. Senna, admittedly with a somber look on his face, was facing directly at his crash site; a few degrees to the right of the monument. It felt as if Senna, the statue, was staring into his own mortality.

That's when every emotion I felt as a seven-year-old kid came rushing back—and boy, it wasn't pretty. Luckily, no one was around to see a grown-ass Mexican guy crying alone on a park bench. The tears flowed for a while, but I eventually regained my composure and made my way down to where the chainlink fence started, so I could carefully examine every item left behind by the adoring fans.

The more dedicated ones left multi-page, hand-written letters in plastic covers to their racing hero, while others adorned the area with everything from flowers to Brazil-themed tennis shoes. There were notes from Acura NSX owners expressing gratitude to Senna for having developed the Japanese supercar, there were tiny drawings left by young kids (or extremely art-challenged adults). Then there were photos from people who had met Senna while alive, who later on visited the memorial to leave behind a token of their love. 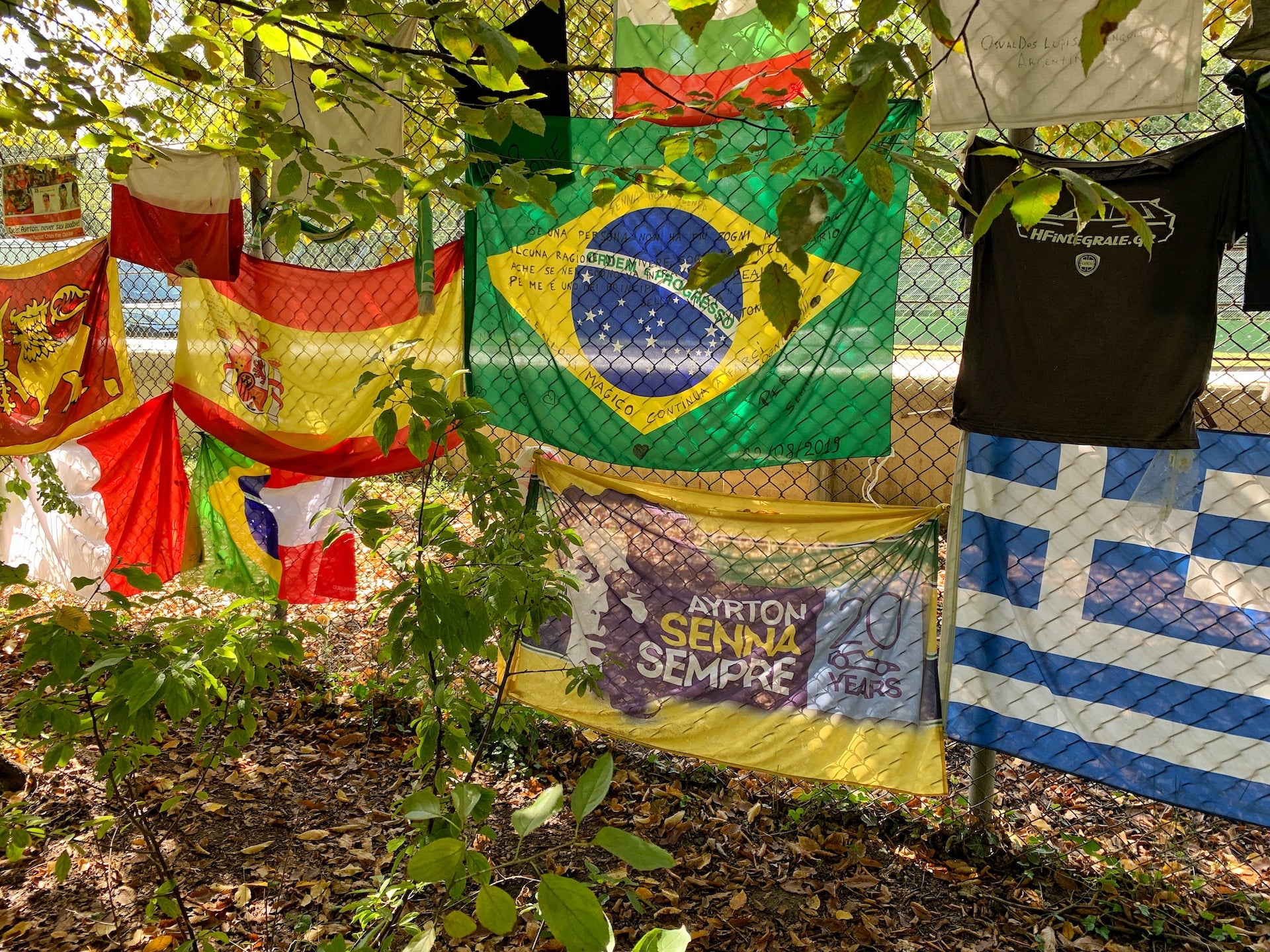 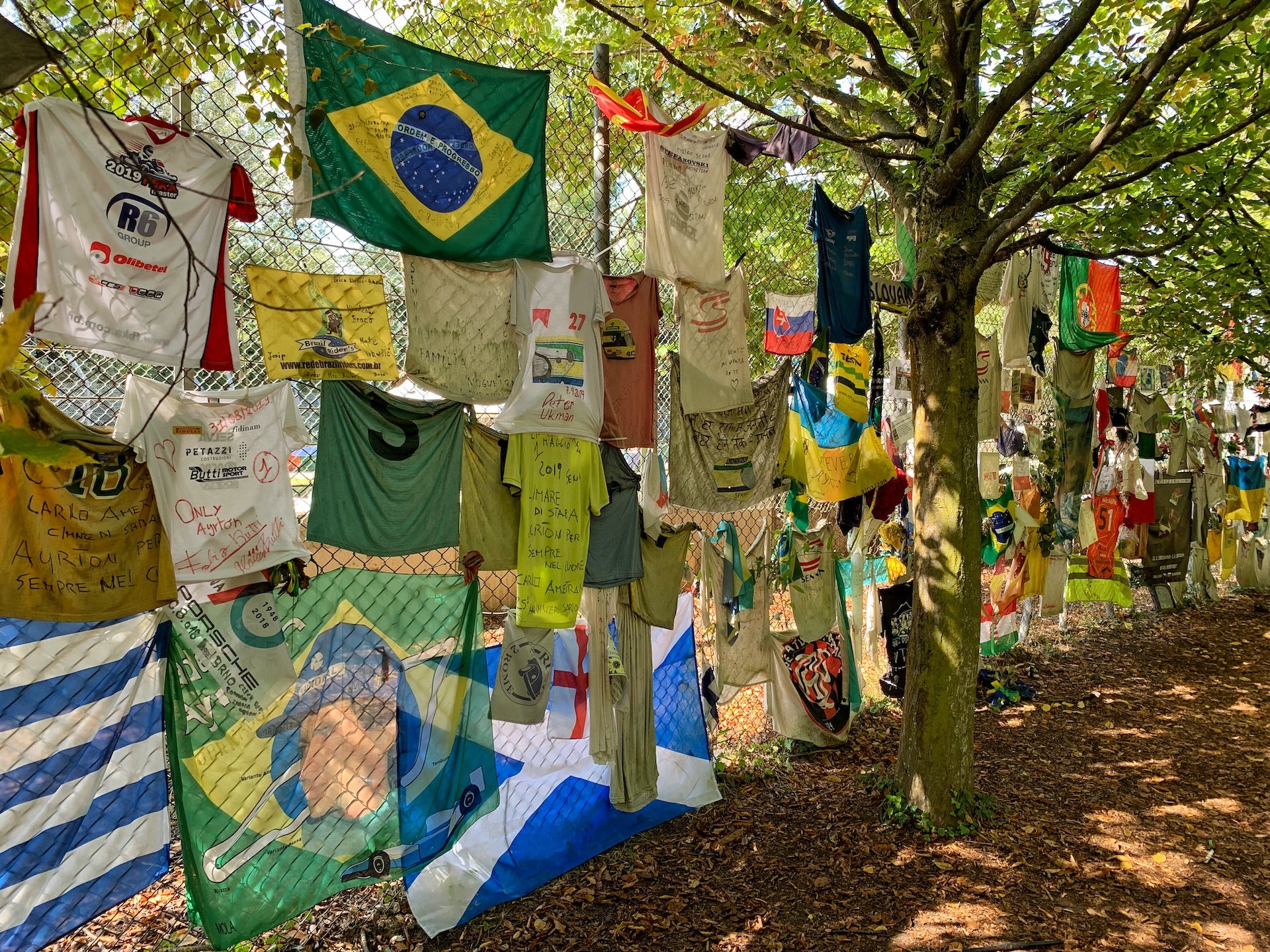 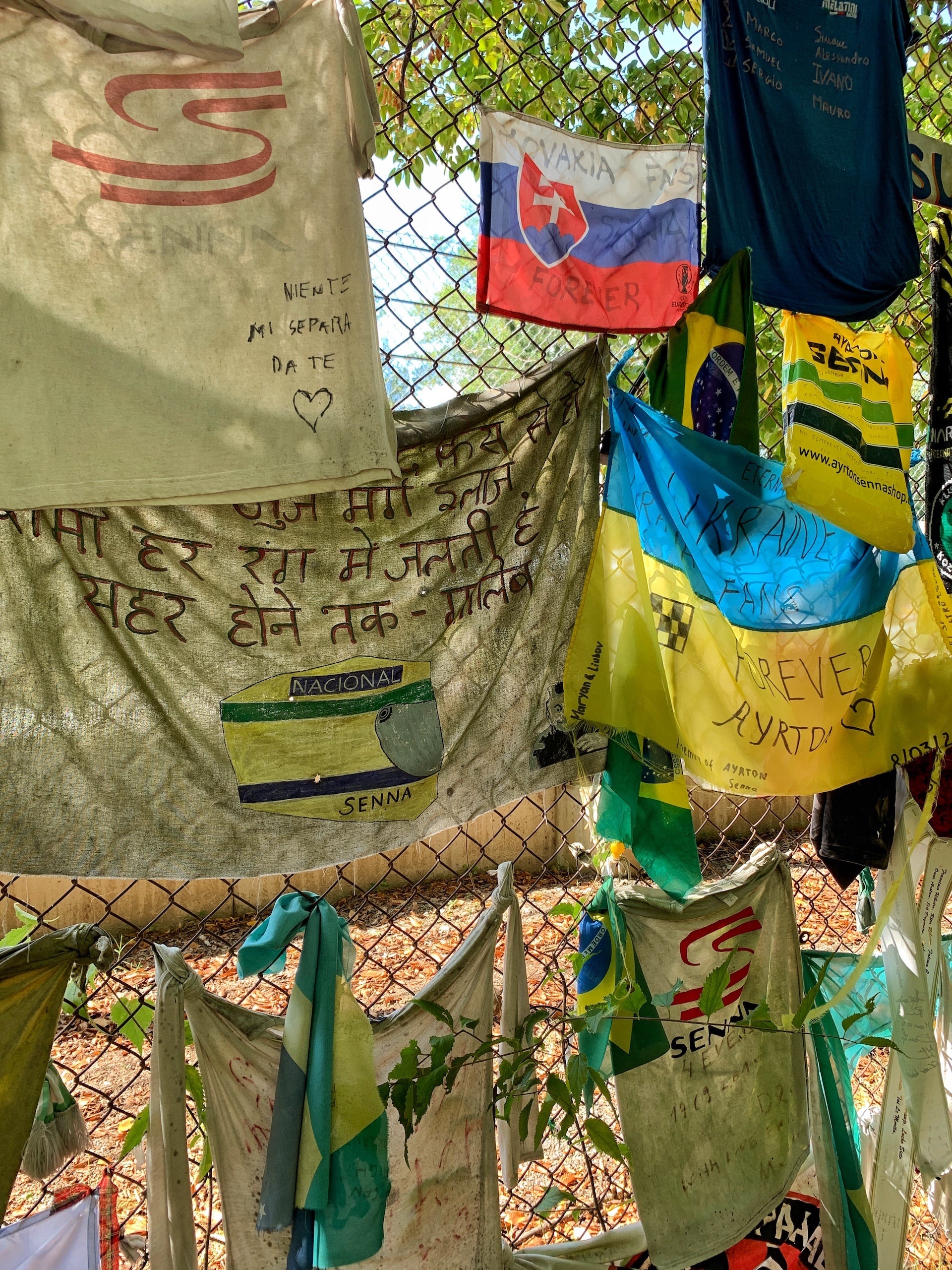 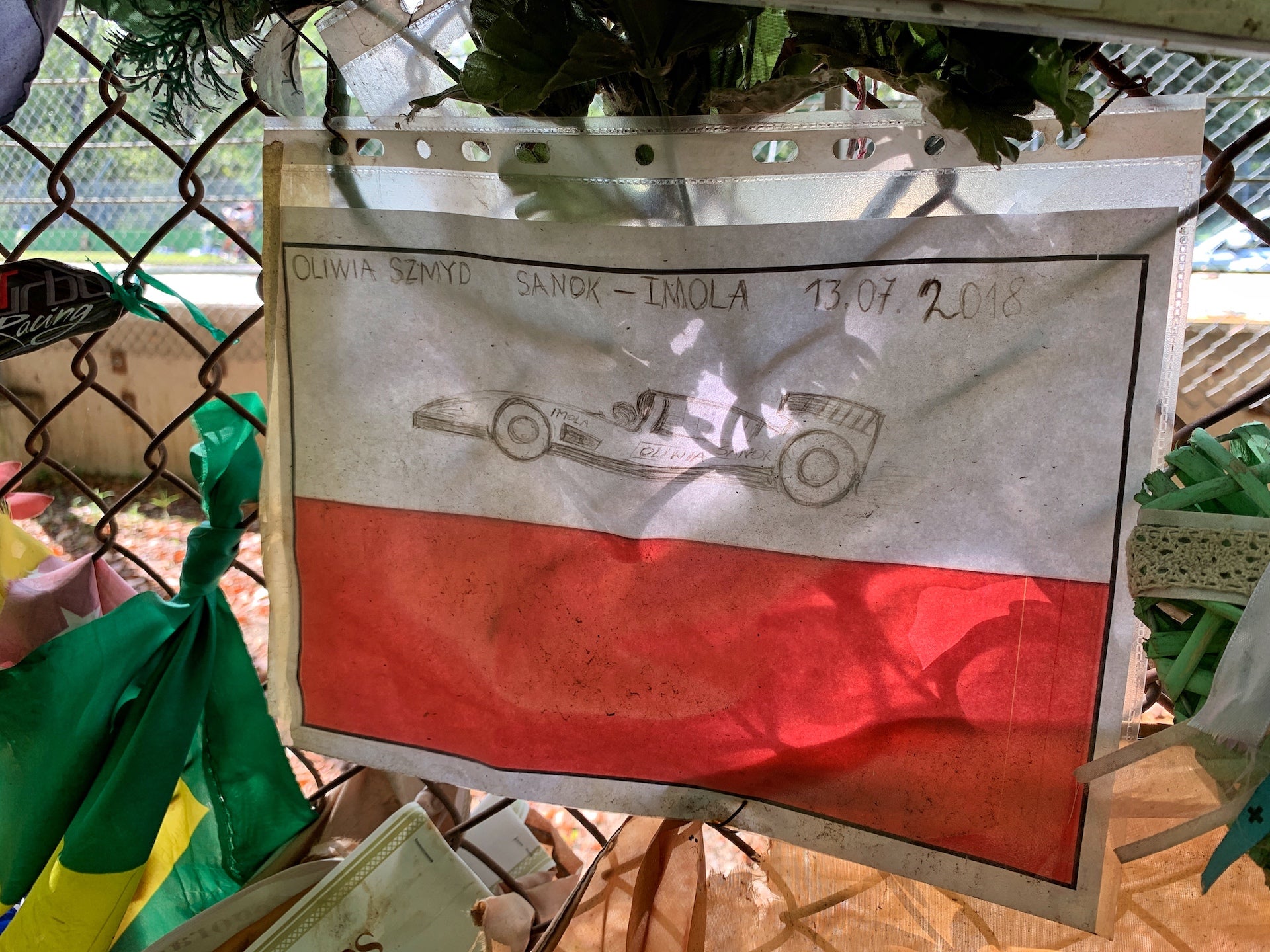 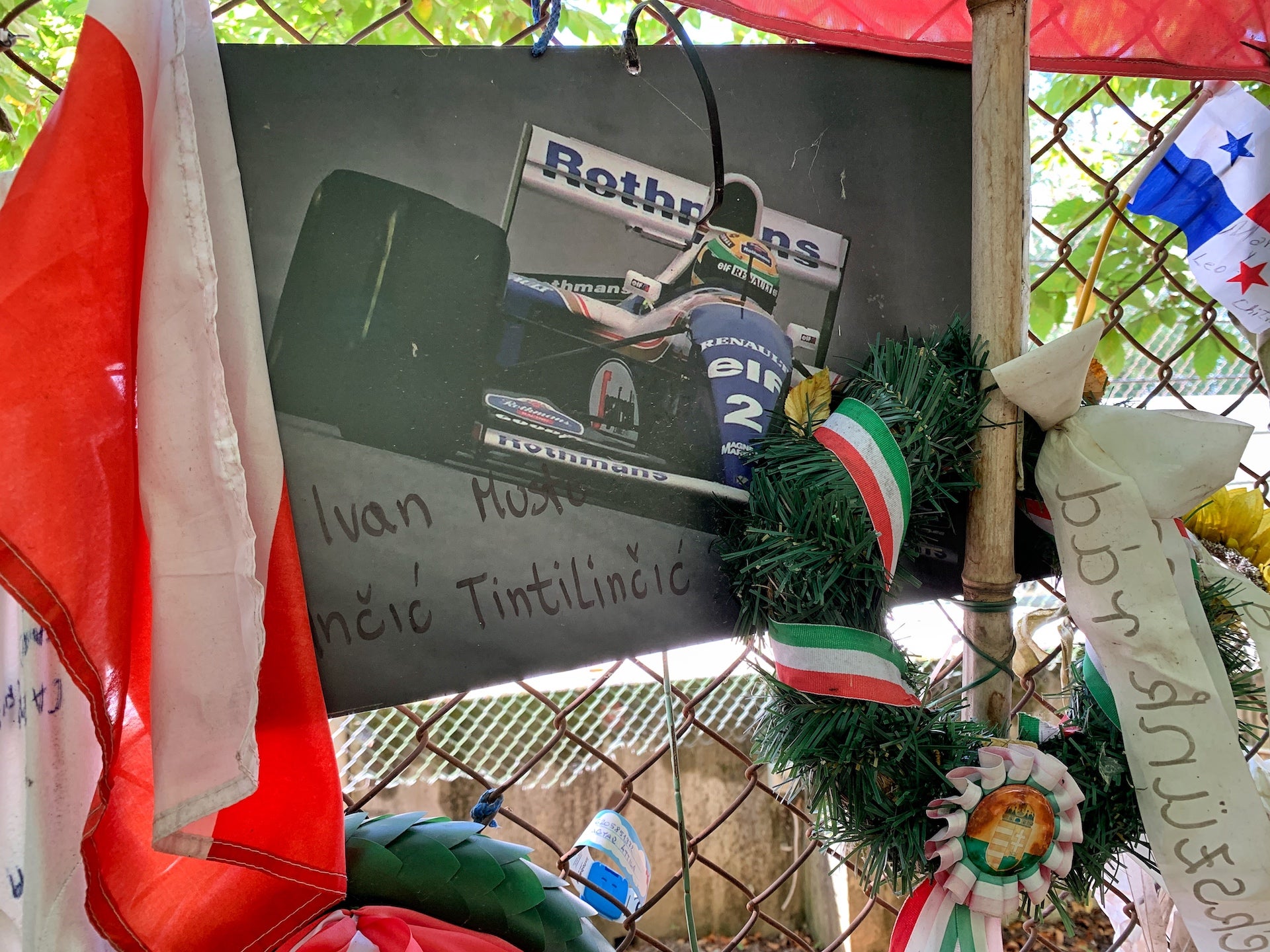 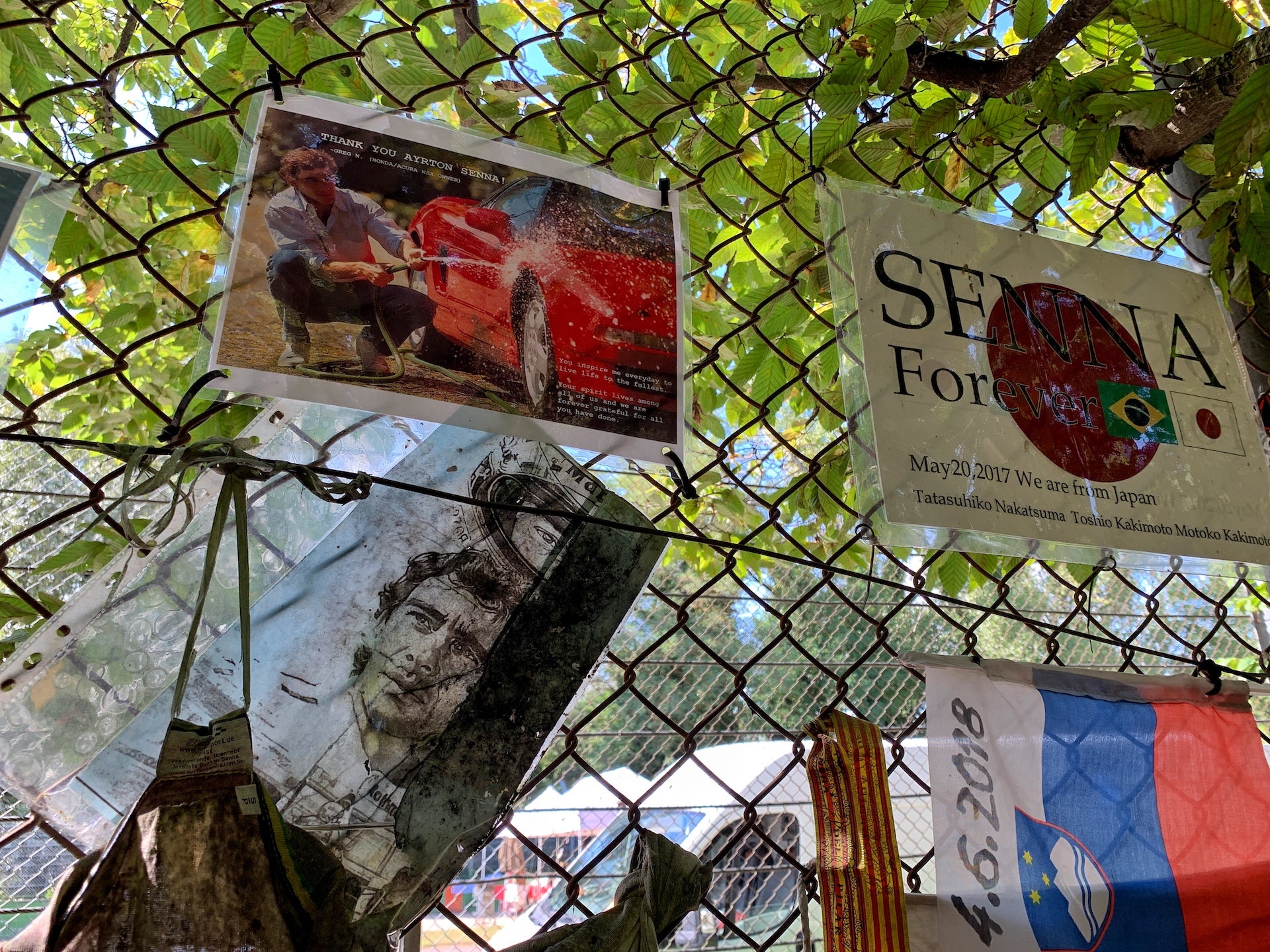 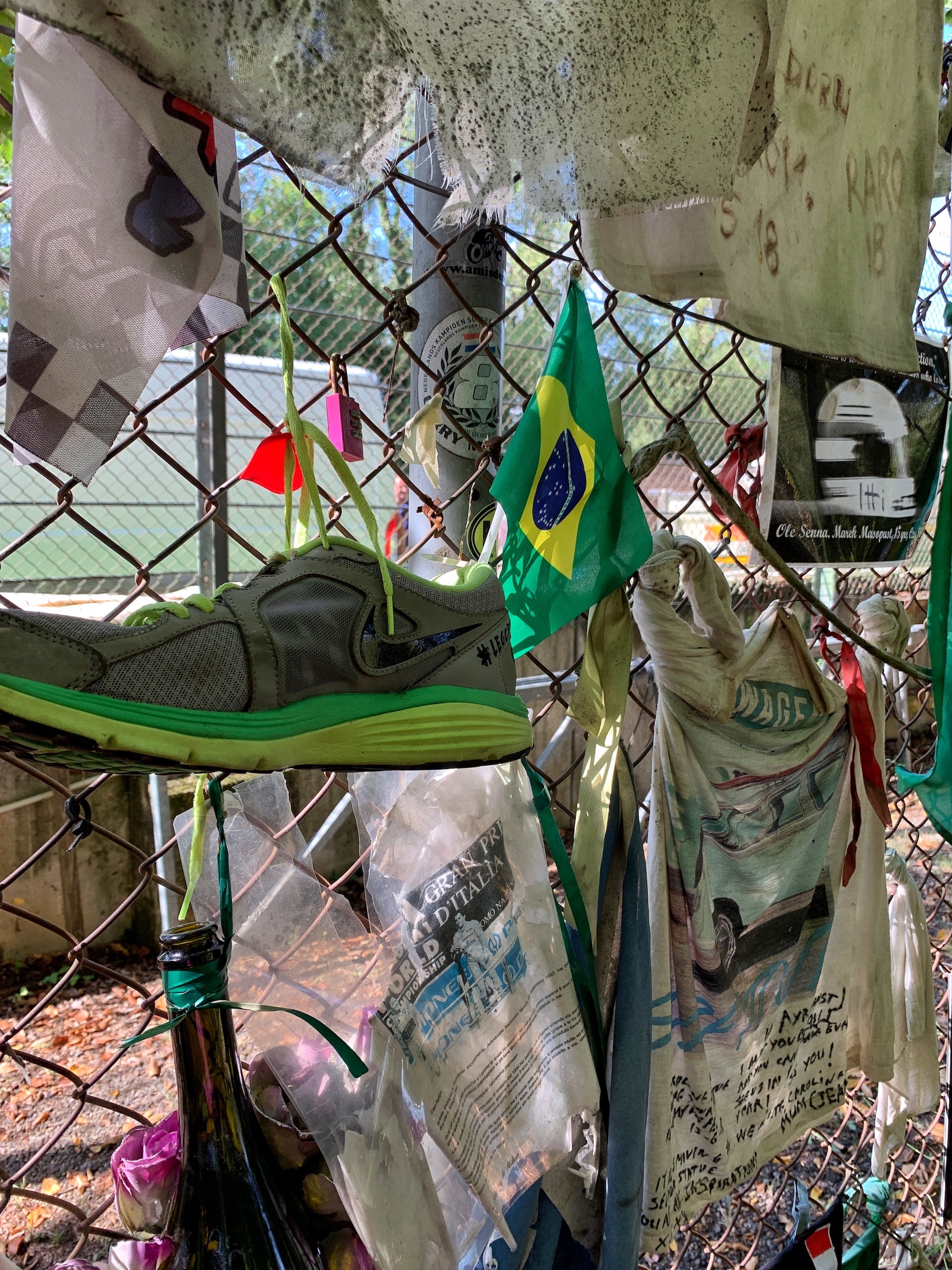 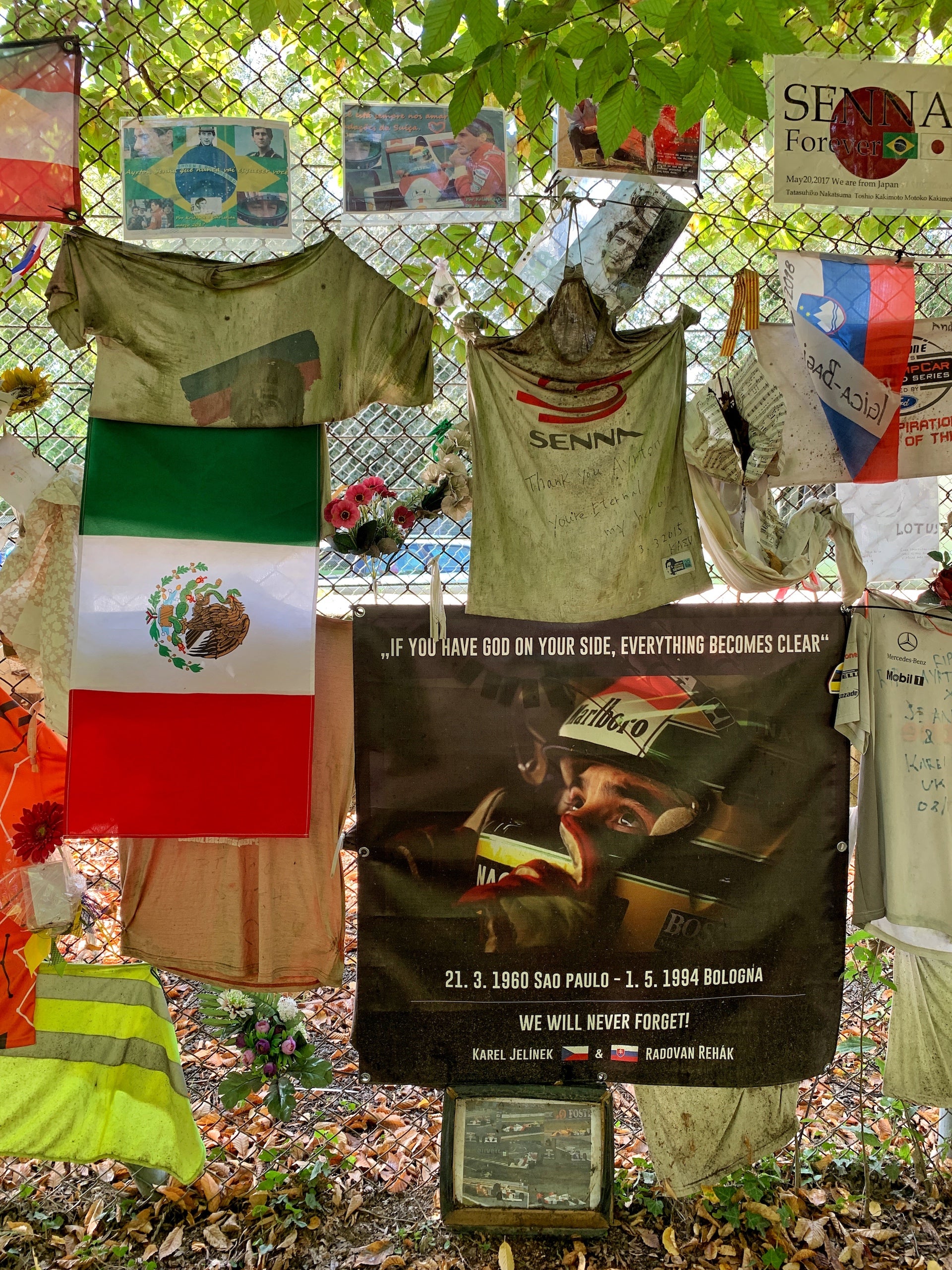 The most heartfelt of them all, however, were the flowers, a rosary, and an angel doll placed on the statue's hands, not only because they intertwined with Senna's deep Catholic beliefs, but because they both appeared recent; the petals fresh and rosary beads clean.

Surely, I have no way of telling if it was a local or just another foreigner like me delivering fresh flowers to Tamburello, but the fact that it still happens is just phenomenal. Even 26 years after his death (25 at the time of my visit), the memorial serves as a reminder that the famous Brazilan will never be forgotten.

I began my walk back to the little Polo, which for some reason had been surrounded by a pack of stray cats who most likely caught wind of the Italian snacks in the trunk. Luckily, I fended off the little guys by throwing some potato chips on the ground. But just like that, I left the one place I had been wanting to visit my entire life and made my way back to Modena.

The time I spent at Imola was so special, that this is actually the first time I publish or even show these photos from my visit. See, for folks like my young son, hearing the word "Senna" conjures up images of the recent McLaren supercar and its famous YouTuber owners—maybe Senna, the must-watch Asif Kapadia documentary—but that's about it.

To me, Senna is a bittersweet memory but also someone larger than life, and visiting Tamburello confirmed that I'm not the only one who feels that way, and I'm a much happier man because of that.