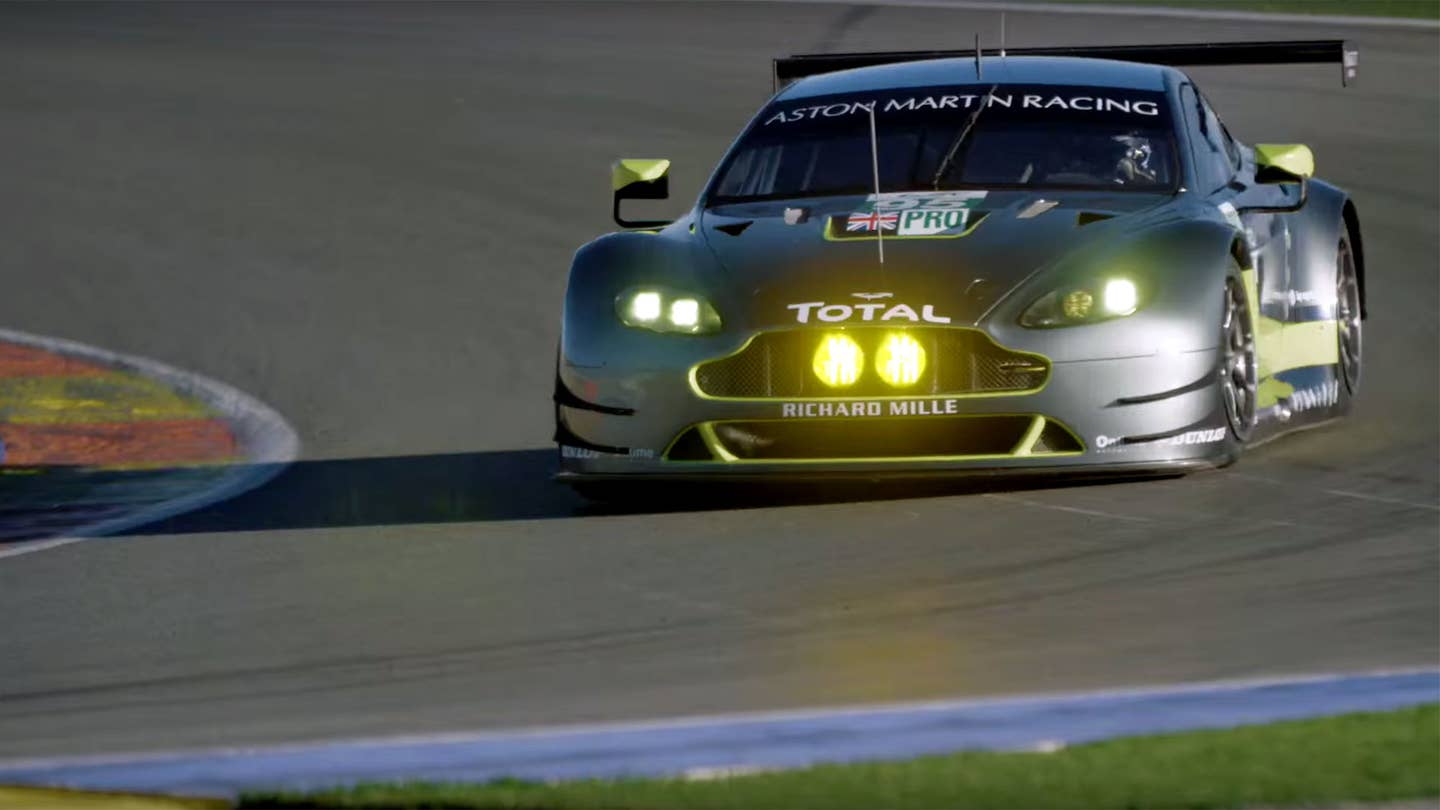 The Aston Martin Vantage may be on its way out the door, but it's going out swinging. Hot on the heels of the reveal of the V12 Vantage S, Aston Martin has pulled the proverbial wrapping paper off the racing-inspired Vantage GT8. It's not quite a street-legal race car, but it's about as close as your coccyx can handle.

One glance at the aerodynamically-optimized exterior is enough to make that clear. Like the Vantage GTE race car that inspired it, the wide-body Vantage GT8 is festooned with enough spoilers, diffusers, and other functional aero elements to make an SR-71 jealous. On top of all those standard bits, there's an optional Aero Pack that slaps a larger spoiler onto the trunk and additional wind-sculpting bits on the corners of the front splitter. And if the new five-spoke alloy wheels aren't extreme enough for you, the car offers lightweight magnesium seven-spoke rims as an option. (They come wearing Michelin Pilot Sport Cup 2 tires either way.)

If the Vantage GT8's looks aren't extreme enough for you, Aston Martin is also offering three contrasting two-tone "Halo" paint jobs designed to highlight the aggro aspects of the sports car's design. The car seen here sports the "Sterling Green and Lime" livery; the car maker also offers "Stratus White and Green" and "China Grey and Blue." Avoid all three designs if you want to have any chance of sneaking over to your mistress's unnoticed.

As the final number in the car's name may have led you to believe, the Vantage GT8 is powered by Aston Martin's naturally-aspirated 4.7-liter V8. For its latest duty, the eight-pot has been cranked up to a predicted 440 horsepower—the highest output seen yet out of the venerable engine, which traces its roots back to the days when Aston Martin and Jaguar lived under the same roof. And while the latest V12 Vantage scores a seven-speed manual gearbox with a retro-cool dogleg layout, the Vantage GT8 has to make do with the same transmission choices as every other V8-powered Vantage—a six-speed stick or an outdated, seven-speed automated manual.

Aston Martin didn't just add power to make the GT8 the most extreme road-going eight-cylinder Vantage yet—they also stripped the sucker down as much as possible. The roof is made of carbon fiber, the exhaust forged from titanium, and all the glass after of the B-pillar is actually polycarbonate. The carbon-fiber seats must be adjusted by hand, and the battery is a lightweight lithium-ion job. Aston Martin shaved off around 220 pounds—and that's without sacrificing air-conditioning or a stereo.

Speaking of pounds—if you want to lay your hands on a Vantage GT8, you'll need to part with a fair amount of them. The car starts at a cool £165,000—roughly $234,000 at current exchange rates. But the car's cost in greenbacks doesn't matter much. As it turns out, Aston Martin will sell exactly none of the 150 Vantage GT8s in North America.