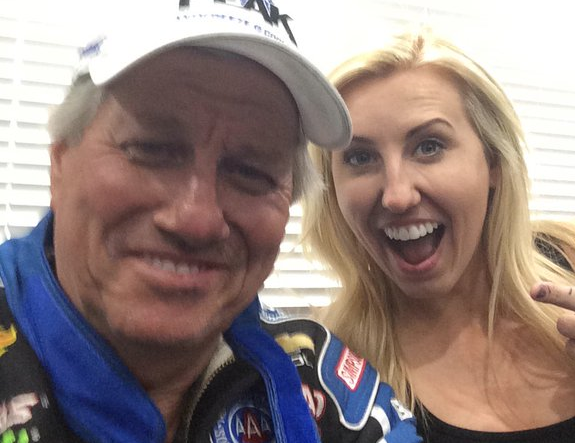 No one said it would be easy.

Said Elon Werner, public relations director for John Force Racing: "Force is tweeting all content himself. It took 25 minutes for him to type his first tweet with one index finger. (Daughters) Courtney and Brittany both have video of this event on their Instagram accounts. It was funny and painful. It took him almost as long to take the selfie which he also did himself. These are all firsts for Force since he has never even sent a text before today.​ I promise this will all be Force, so like him, it will be sporadic and over the top."

Thus motorsport's final true dinosaur tweets. His first is a reference to Dale Earnhardt, Jr's announcement that he plans to donate his brain for concussion research: "Earnhardt Jr. sorry, they refused my brain. I'm a dinosaur on Twitter they even stole my name 66 years old 21 in my firesuit I'm exhausted"

Like Force in person, it sort of makes sense, and sort of doesn't. It appears that it doesn't matter -- he has tweeted four times, yet already has a following of nearly 14,000 as of Sunday afternoon.

The account for the 16-time champion Funny Car driver is @johnforce_FC.