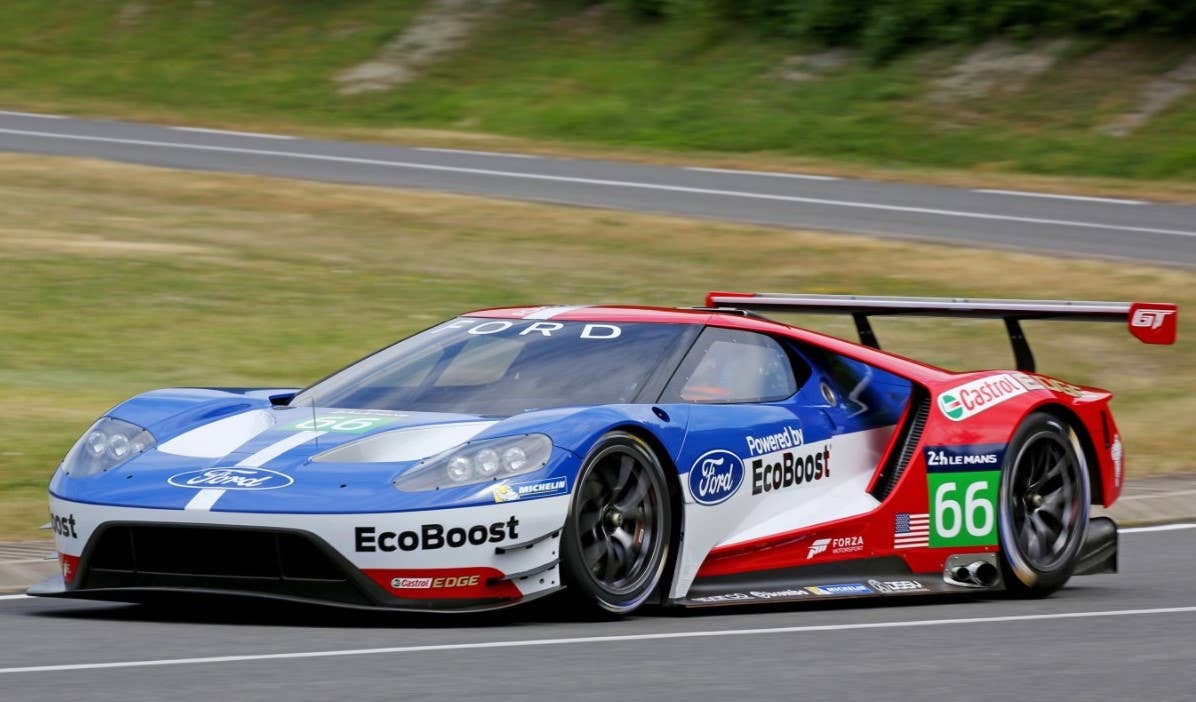 We’ve seen the two U.S.-based Ford Chip Ganassi Racing  Ford GTs plenty this year – at the Rolex 24 Hours at Daytona and the Mobil 1 Twelve Hours of Sebring – but we haven’t seen the two England-based Ganassi Ford GTs until this weekend, at “The Prologue,” which is the coming-out party for the cars in the FIA World Endurance Championship.

The Ford GT assault on the 24 Hours of Le Mans this year, in hopes of duplicating the historic Ford GT win at Le Mans in 1966, 50 years ago – includes four cars: The two from Ganassi’s shop in Indianapolis, and these two, fielded by Multimatic, which built the cars at its Canadian company.

The Prologue takes place at Circuit Paul Ricard in the south of France. For these two Ford GTs, the learning curve will be steep, as the team will compete in just two races – the 6 Hours of Silverstone and the 6 Hours of Spa – before arriving at Le Mans in a little over two months.

And the result was good. Overall, the two Ford GTs were fourth and fifth in all the GT cars, behind a pair of Ferraris and a Chevrolet Corvette. At the very top of the class: The two Porsche LMP1 Prototypes, ahead of a Toyota and an Audi.

“This is only the second time we’ve been on track with the full team and I’m pleased with how well everyone is working together,” said Ford GT Team Principal George Howard-Chappell. “We’ve managed to do a lot of laps here, steadily building up the mileage on the Ford GTs; this is an endurance championship after all. Where we are in relation to the competition will become clear at Silverstone.”

Both WEC Ford GTs have been running at The Prologue with the full Le Mans line-ups taking the wheel over the course of the two-day test.  In the No. 66 Ford GT, Stefan Mücke has shared driving duties with Olivier Pla and Billy Johnson.

Johnson, by the way, won the Continental Challenge SportsCar race at Sebring last weekend. Pla, driving a Prototype, qualified on the pole for the Twelve Hours.

“The team is really coming together now,” said Mücke. “The three of us like the same things in the car so driver comfort won’t be an issue for us. We have completed some good race simulation work and I’m very happy to say there is a good feeling in the team and I think we have a good season ahead of us.”

The No. 67 Ford GT has seen Marino Franchitti teamed with Andy Priaulx and Harry Tincknell.

“It’s really good to be on track with our competition for the first time,” said Franchitti, brother of IndyCar champ Dario. “We’re a new team so we’re still finding our way but there is already a great camaraderie between the two Ford GT crews.  To win in the WEC everything has to be perfect. It’s going to be a dogfight but we’re looking forward to the battle.”

Although the official pre-season test is now over, Ford Chip Ganassi Racing is remaining at Circuit Paul Ricard to complete an endurance test on Monday and Tuesday. The first race of the 2016 FIA World Endurance Championship: Silverstone in England April 17.