Fixing my good little dirt bike, because the fella who sold it to me is gone now. 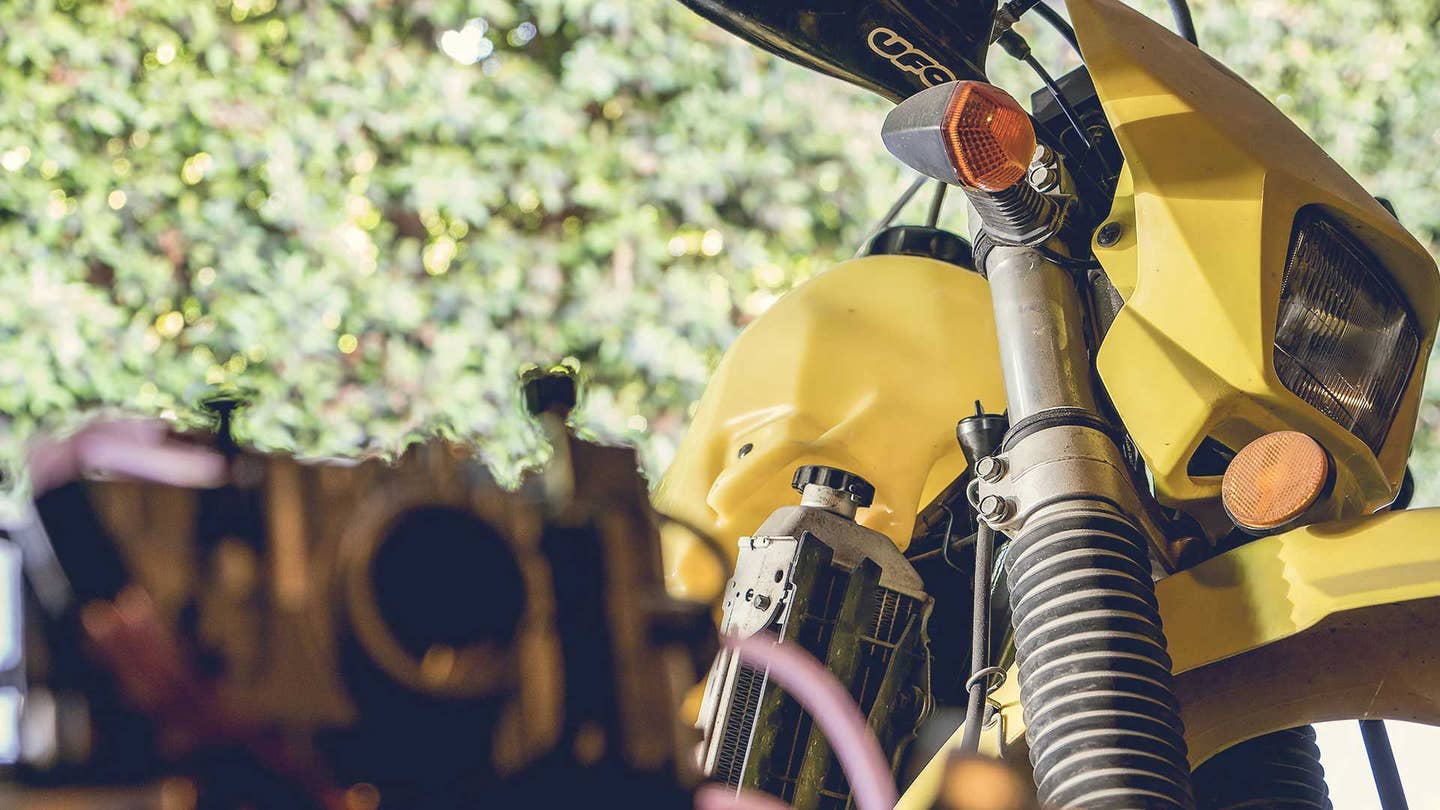 This stupid thing. It’s binary. A hundred-dollar on-off switch. Gas? Yes or no. There’s no reserve. No half measure. We’ve got that in common, I guess.

Out in the garage, under the flotsam of three moves and sawdust, there’s a dirtbike. A Suzuki. Bright banana yellow, powered by an agricultural little 400cc-single and resting on top of gangly forks. I don’t remember the last time I rode it. The battery was too-often discharged, gas sediment too-deep settled into fuel lines. Despite all the disuse, all the headaches, I doubt I’ll sell the Suzuki. Because the fella who sold it to me back in college taught me a lot about good little things, and he’s gone now.

This isn’t raw sentimentality. I’m not a namer of cars, or a keeper of souvenir sweatshirts. But I do think about long days on dirtbikes in college and feel a little gratitude. I bought the Suzuki from my friend and set about hanging a senior thesis off it. “Photography of Southern California Coastal Mountains,” or something like that. It was an excuse. The bug bit me hard, and I was riding every chance I had.

I used my last student loan to buy that motorcycle, and then the next four months were spent subsisting mostly on the charity of my parents and friends. My newspaper job might as well have paid in burritos. But the bike was a godsend. It was cheap. Cheerful. It revelled in abuse. It was my transportation, my desk, my vacation, my wingman. One afternoon, I rode to my friend’s office, a cheery room in front of a renowned collection of vintage goodness; a garage packed full of motorcycle treasures sharing air with Can Am and F1 racecars and a long string of Norton racers.

“I can’t stop riding this motorcycle.” I told my friend.

So when a bunch of yahoos in my informal motorcycle club started to talk about exploring Baja this winter, I started looking under the dust for my Suzuki.

The Pingel petcock belongs on a spacecraft. Or an airliner, maybe. It’s beautifully polished, heavy. Six flat sides like a bolt, and bigger than it needs to be. The kind of piece you can wrench on, with any wrench, anywhere. The lever at the bottom moves with German rifle accuracy and smoothness. On. Off.

Before I install the Pingel I play with it and admire it, then share it with friends to hold and admire, which they do, because they know a good little thing, too. A couple wraps of plumbers tape, a gentle twist. It lines up perfectly with zero fiddling. Probably the nicest thing on the bike.

It’ll replace a notoriously irritating factory vacuum petcock that doesn’t exist in a world of ones and zeroes. Instead it dribbles, and then sometimes doesn’t. The selector lever could be soviet, it does its thing or doesn’t with a void of passion totally unbecoming a motorcycle part. Because of that I care for it not at all. The vacuum actuated thing was garbage on day one, I just didn’t know it.

This will be the Suzuki’s third petcock, and undoubtedly its last. For a measly $10 I could have replaced the factory valve with a visually identical thing from a Suzuki quad. To do so is the current Internet wisdom. And it would probably work, probably perfectly. But instead, I spent $100 on a good little thing. And as always, I’m glad I did.