Kevin Harvick dominates at Dover International Speedway and gets his fourth victory of the season. 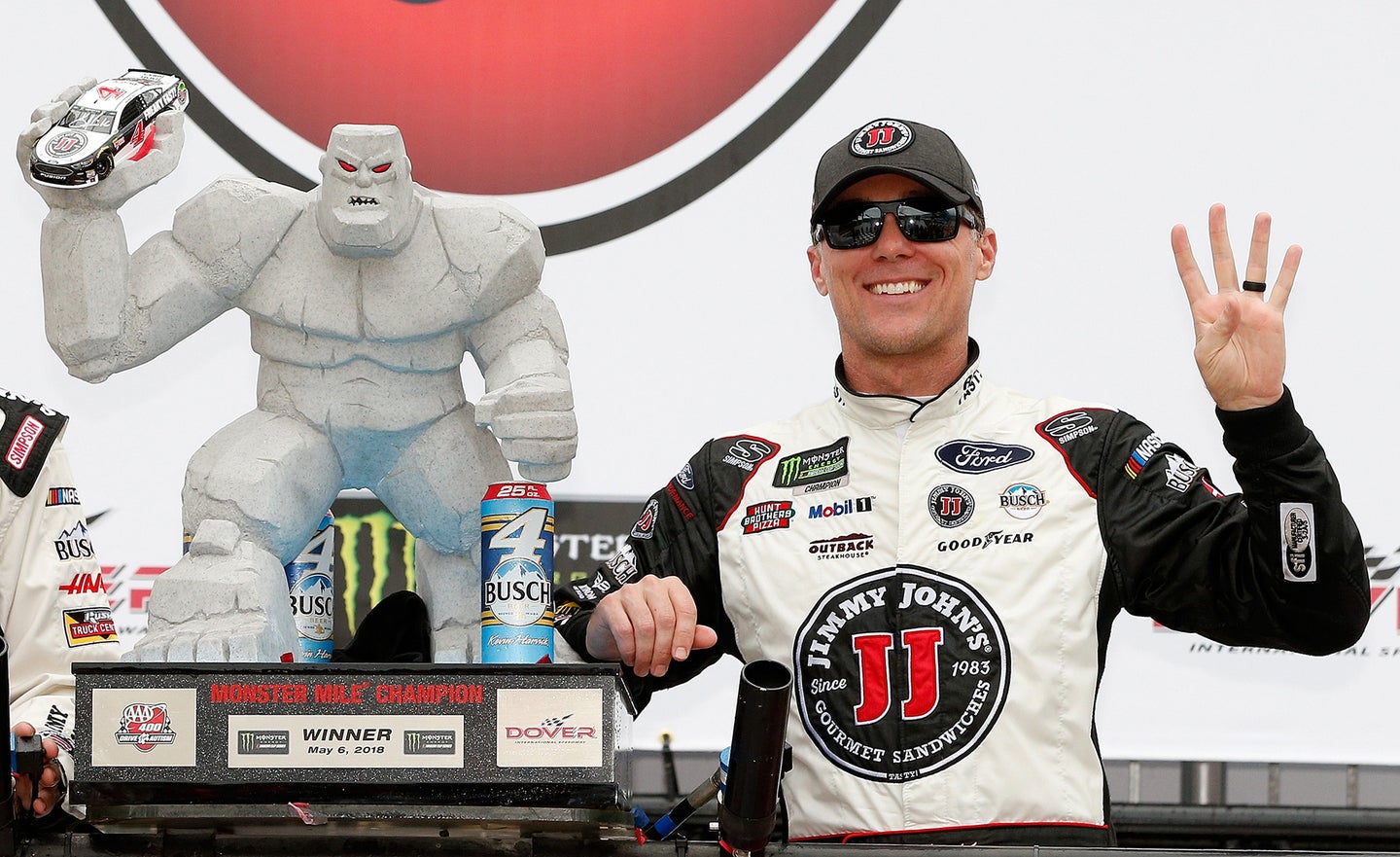 For at least one day, Kevin Harvick put all talk to rest about Jimmie Johnson dominating at Dover International Speedway by winning the AAA Drive for Autism 400. Johnson still holds the record for most premier-series wins at Dover, but the day belonged to Harvick. The 2014 MENCS champion scored his second top-level win at the Monster Mile capturing the checkered flag after a 40-minute rain delay.

Heading into Dover, Harvick had three wins this season including Atlanta, Las Vegas, and Phoenix. He made winning at the Delaware track look easy by sweeping the first two stages before driving his No. 4 Jimmy John's Ford into Victory Lane. Harvick's teammate briefly held the lead towards the end of the race, but he proved to be no match for Harvick who appears to be in playoff form. When asked if he thought he had the team to beat, Harvick said, “It was just one of those weekends where the car was spot-on from the time we got here, and the guys are just doing a great job. Everybody is just so detail oriented right now, and I feel like we're playoff racing on a weekly basis, and if you're going to win a bunch of races, that's what you have to do.”

Only six drivers led laps at Dover. Race winner Harvick led the most with 201, and the sixth-place finisher Brad Keselowski led the second most with 108. Clint Bowyer, Harvick’s Stewart-Haas teammate and race runner-up, led 40. Ironically, Bowyer was the race leader when the red flag came out for the rain delay. After the race, Bowyer said, “It’s fun to be running like this again and competitive and upfront.”

The other three drivers that led laps at the Monster Mile included Ricky Stenhouse Jr., Alex Bowman, and Joey Logano, the latter of which was out in front for just one lap. Although he started the race from the rear after failing pre-race inspection three times, Bowman led 26 laps. Kyle Larson and Austin Dillon also started from the back. Bowman and Busch Pole winner Larson had their crew chiefs ejected for the race, and like Bowman, Larson’s No. 42 Chip Ganassi Racing Chevrolet failed pre-race inspection three times. Dillon’s No. 3 car had a non-compliant splitter.

Kyle Busch’s woes continued at the Monster Mile track thanks to a broken driveshaft on lap 272. He has failed to complete a race at Dover in the spring four of his last five attempts. “At first, I thought that it was an engine problem, but that wasn’t the case,” said Busch. Busch, like Harvick, has three wins this season. The AAA Drive for Autism 400 race at Dover was his first DNF of the season.

As NASCAR rolls into Kansas, fans can’t help but wonder if Kevin Harvick and his veteran teammates at Stewart-Haas Racing will keep their hot streak alive. The team finished with three drivers in the top-five at Dover International Speedway. Joe Gibbs Racing driver Daniel Suarez had his best Cup career finish at Dover when he crossed the finish line third. Will he continue where he left off and win his first Monster Energy NASCAR Cup race in Kansas? The KC Masterpiece 400 Monster Energy NASCAR Cup Series race at Kansas Speedway will take place Saturday, May 12 at 8:00 p.m. ET. Will we finally see a first-time winner drive into Victory Lane this season?