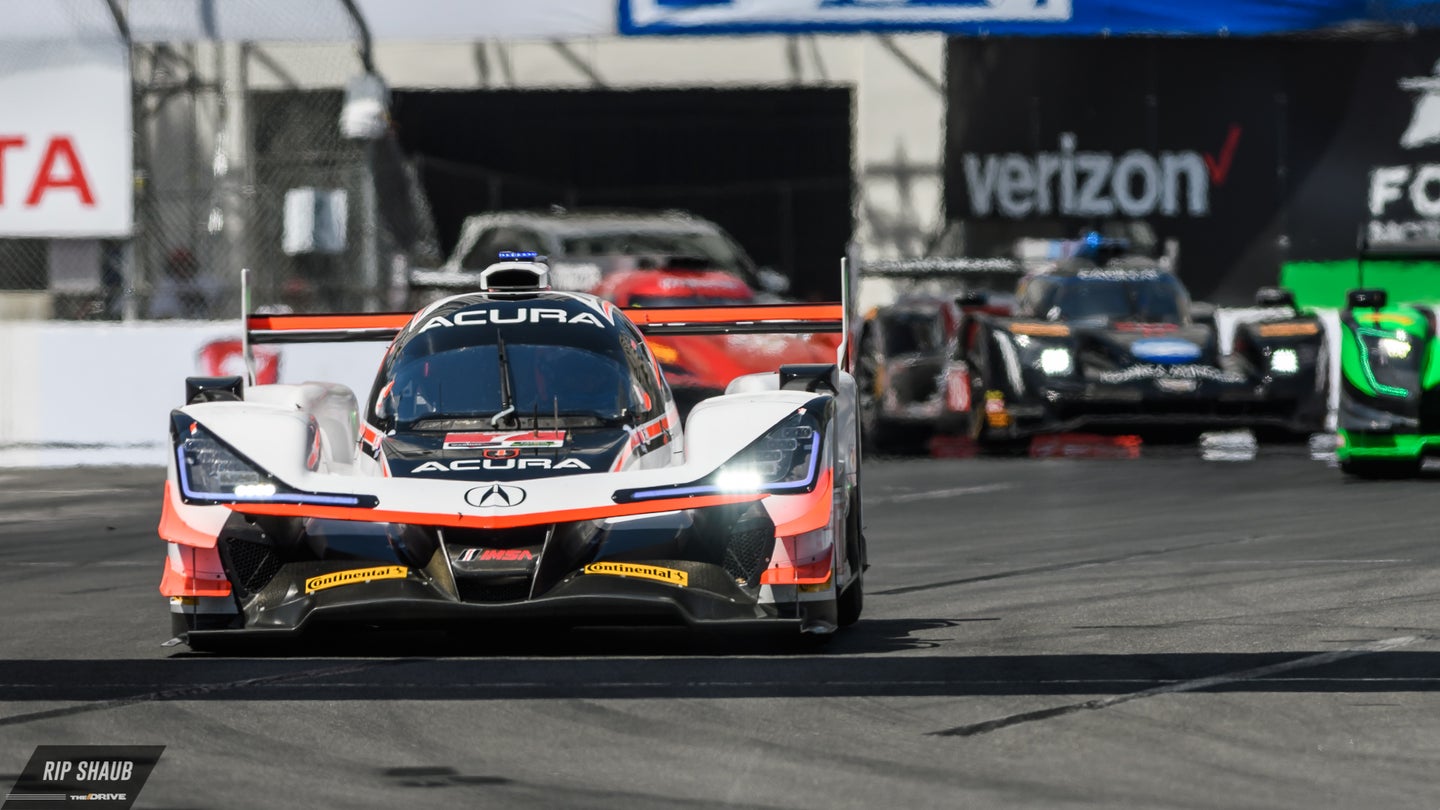 Mid-Ohio Sports Car Course will host the fourth round of 2018 IMSA competition this weekend, its first time welcoming the series since 2013.

When the nationwide racing league last visited the track, it was known as the Grand-Am Rolex Sports Car Series, and 16 drivers who have won there previously will take to the grid on Sunday despite a five-year gap between events. This will mark the first race of the currently-running IMSA campaign to last the series' standard length of two hours and 40 minutes following the shortest event of the season in Long Beach this April.

Despite not competing there in a half-decade, teams and drivers are anxious to revisit the track, as it was one of the most beloved before being replaced with Circuit of the Americas in Austin, Texas. Its fast and tricky 13-turn layout is expected to be tightly packed with 34 entries in total, including two GT categories, Le Mans and Daytona, the latter being the series' Pro-Am category. The Prototype class will be the deepest for this year's Mid-Ohio contest, with 14 cars including the points leaders, Team Action Express' Mustang Sampling crew.

Additionally, the race titled as the Acura Sports Car Challenge at Mid-Ohio will conclude the first third of the season. With three races in the rearview, teams are beginning to work out the kinks and we should see true form from the majority of the field.

Going into this weekend, here's a handful of storylines to pay attention to as the sprint event kicks off IMSA's comeback to Mid-Ohio.

Mid-Ohio will be Team RLL's fourth-ever race fielding the fresh-off-the-boat BMW M8 GTE twins. The newly developed platform from Bavaria debuted at Daytona in January with woes aplenty as the crew and drivers initiated the learning curve in its endurance racing birth, but flickers of mastery began to show at Sebring and again at Long Beach. RLL's No. 25 entry managed pole position in just its second outing and was able to climb from the back of the field to the front prior to a crash at last month's Californian sprint event. The team hopes to forgo the issues it's had in the first batch of competition this year and compete directly with Corvette Racing, Ganassi's Ford GT duo, and the Porsche 911 RSRs.

The young BMW team will be facing stout rivals in the GTLM category, though, as its opponents consist of several past-victors at the circuit. Corvette Racing's Oliver Gavin touts the most wins of any active driver (along with Bill Auberlen) at Mid-Ohio, with four in total, and his stablemates Tommy Milner and Jan Magnussen have also won there, the latter doing it twice. Ganassi will also field a strong effort with three of four team drivers touting Ws at the track, and while Porsche's current crew is relatively new to Mid-Ohio, the manufacturer as a whole has claimed a record 22 wins since 2000.

Team RLL now stands as the only entered GTLM team without a victory this season, so look for it to focus on racecraft and strategy to shift favor its way. The cars have already shown their pace, and if that speed can be capitalized on with stellar calls from the pits, things could get interesting in the manufacturer-backed GT category.

The No. 67 Ford GT of Richard Westbrook and Ryan Briscoe currently sits atop the class standings with the No. 4 Corvette Racing C7.R sitting in second. Ganassi's No. 66 rounds out the top three with Joey Hand and Dirk Mueller boasting 84 points before this weekend's race.

Mustang Sampling Racing teammates Filipe Albuquerque and Joao Barbosa are riding a points-crazed tidal wave with two wins in the first three events of 2018. A dominant showing at Daytona gave the Team Action Express branch a bit of breathing room at Sebring, but it returned to its triumphant ways in April to place it back in front of the Prototype field. The No. 5 Cadillac DPi-V.R will enter Mid-Ohio with a five-point lead over the No. 31 Whelen Engineering entry of the same make, but Barbosa & Co. have one thing on their side—momentum.

The 43-year-old driver took home top honors the last time that IMSA (neé Rolex Grand Am) competed at the track, meaning that he hopes to make it back-to-back victories despite the last win coming in 2013.

“It’s going to be very challenging, especially with all the different classes and a lot of cars on a pretty narrow track,” Barbosa said early in the week. “There’s not a lot of room to overtake, so the GT traffic is going to play a key role in how we’re going to manage traffic and how the race is going to go."

“It’s going to be very challenging because of that. I think it might decide the race, the way different cars manage the traffic. Historically, the GT guys don’t give you a lot of room. At Mid-Ohio, it’s very easy to block, so it’s going to make for an interesting race, for sure,” he said.

As for his pal Albuquerque, this will be his first time competing at the esteemed road course. His prowess coming from Audi's former LMP1 efforts has boded well in his first IMSA WeatherTech season, however, as he has proved to be a worthy accompaniment for Barbosa and team sporting director/endurance driver Christian Fittipaldi.

Others in the Prototype category will be looking to start their own streak. Whelen Engineering, as mentioned before, sits narrowly behind Mustang Sampling in the championship standings and is still looking for its first win of the season. The No. 22 Tequila Patron ESM Nissan Onroak DPi, which beat the rest to the top step at Sebring in February, will then be headed by young star Pipo Derani as he and Johannes van Overbeek hope to nudge their way into the conversation as well. And finally, Acura Team Penske is crossing its fingers that one of its two entries will build off of its pole-winning performance at Long Beach to claim its first victory since the American outfit's return to sports car competition.

The Michael Shank-led team based in Columbus, Ohio is on a homecoming tour that it hopes will breed a GTD class win with two cars in tow. Familiar faces such as Katherine Legge in the No. 86 Acura NSX GT3 and Lawson Aschenbach in the No. 93 will spearhead the Pro-Am assault with co-drivers Alvaro Parente and Justin Marks sharing duties for the 34-car event. While Shank admits that this is a must-win to honor the team's HQ, it's also a big one for the entire Acura brand.

“Listen, this is Acura’s home race,” Shank said. “They stepped up and committed to sponsor the whole weekend, so that’s a big step. That means they trust that (Acura Team) Penske [which fields a pair of Acura DPi in the Prototype class] and us can get the job done for them and get some results beyond everything else." He continued, “It’s not only the high-up corporate guys at Honda and Acura, it’s also these people that put these NSXs together an hour away from Mid-Ohio. They’re literally hand-built an hour away and those folks will be over. They’re proud of this car and they should be because it’s a little piece of artwork, honestly."

“I feel more pressure to make sure we perform in front of them than almost anything else. There are 160 people that build these cars, and they deserve us to do well,” he said.

MSR's No. 86 entry is currently third in points, 10 behind the class-leading Paul Miller Racing Lamborghini Huracan GT3. A second-place finish at Daytona allowed the crew a headstart and it will aim at elbowing its way through the crowded field for a prime finish Sunday afternoon with the verified NSX GT racer.

Mercedes-AMG Team Riley Motorsports will be hoping to make up its deficit at Mid-Ohio as the two races it won in 2017, one at Long Beach and the other at Circuit of the Americas, were both taken off the GTD calendar this season. Pilot Jeroen Bleekmolen has one victory to his name at the circuit and teammate Ben Keating has shown promise at similar tracks, so expect a worthy outing from them as they shoot to dethrone Paul Miller Racing. The AMG pair currently sits in second place by just seven points.

Each class is wide open for a switch-up at the top with no one having a clear advantage this weekend. Teams are starting to settle in and this middle-stretch of spring and summer contests is typically where we see the frontrunners leap forward in IMSA's premier series. Qualifying will play a crucial role in Sunday's outcome with the stacked grid expected to produce plenty of overtaking and drama, which is all you can ask of the nation's leading sports car organization.

IMSA WeatherTech qualifying will be broadcasted on IMSA.TV Saturday at 11:55 a.m. EST. Sunday's Acura Sports Car Challenge at Mid-Ohio will then be shown on FS2 starting at 1:00 p.m.