Will Antonio Giovinazzi Replace Kimi Räikkönen in Formula One?

Deals suggest ever-patriotic Ferrari is preparing the Italian driver for his big shot. 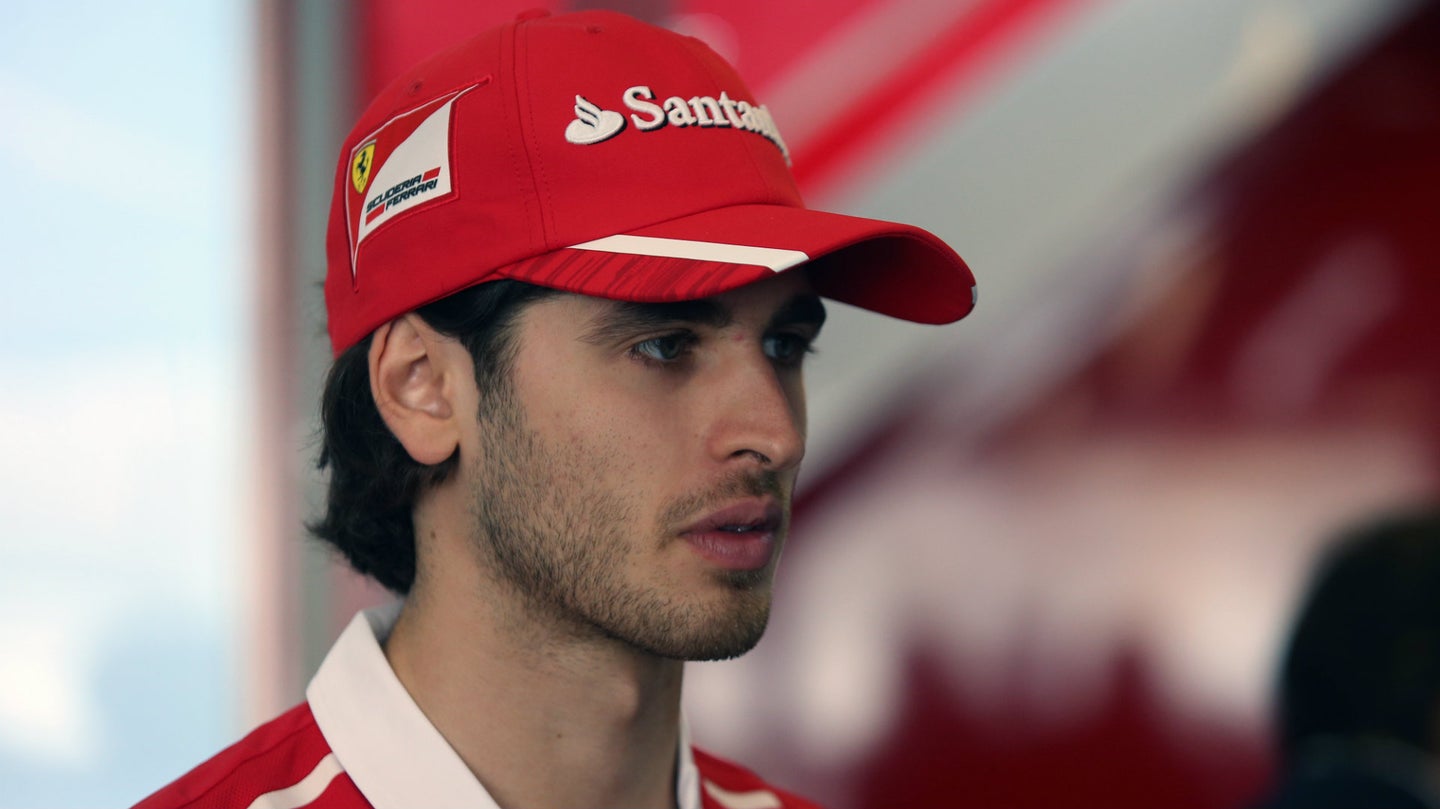 Finnish driver Kimi Räikkönen has been racing in Formula 1 for a long time—long enough to see both of Ferrari's two most recent Monaco Grand Prix wins, in fact. Middle age is creeping up on him, and with a wife and two kids to look after, his remaining time in Formula 1 is limited. With his contract with Ferrari expiring this year, multiple talented successors are seeking to take his seat at the newly competitive Ferrari team. Among the aspirants are former Ferrari Driver Academy member Sergio Perez, ambitious Toro Rosso driver Carlos Sainz, and what has become the most likely choice: Ferrari reserve driver Antonio Giovinazzi.

An article published by GPUpdate reports that Giovinazzi has been gifted seven sessions of driving with Haas in Free Practice 1 sessions as part of a deal with Ferrari. Teams that have no aspirations for their reserve driver don't fork over money to another team to give them seat time; Ferrari is making sure Giovinazzi is being trained, and gaining the seat time necessary to be worthy of a seat at a top team. Some of the experience required for a Formula 1 seat has already been gathered by Giovinazzi—who, as Sauber's reserve driver, was the substitute for Pascal Wehrlein, whose neck injuries incurred at the Race of Champions prevented him from driving until the Bahrain Grand Prix. During that time, Giovinazzi wowed Sauber boss Monisha Kaltenborn, and completed two full race weekends and preseason testing while standing in for Wehrlein.

Sainz and Perez are looking like less probable choices every day. According to Dr. Helmut Marko of Red Bull, the rumors of Sainz leaving for Ferrari are unsubstantiated, as he claims to have heard nada on such a move. Thanks to Perez's escalating talks of a contract with Renault, his contention for a Ferrari seat has become less serious; even if Ferrari were to acknowledge him as an option, he would likely be a second choice despite his experience, as he snubbed Ferrari for his 2013 shot with McLaren. If there is one of the seven deadly sins of which Scuderia Ferrari is guilty, it is pride, and having one of their junior drivers leave them for a rival would certainly be taken as a slap to the face.

Aside from the other reasons why Giovinazzi may be Ferrari's first choice, there is one other big motivator: heritage. Ferrari's patriotism borders on nationalism—to the point that they avoid having to open facilities in England, where most Formula 1 teams are based. Giovinazzi has one thing that Ferrari wants: Italian heritage. Ferrari hasn't had an Italian driver since Nicola Larini in 1994, and hasn't had an Italian champion since Alberto Ascari in 1953. Such a drought for a team as Italy-obsessed as Ferrari may not be tolerated any longer. And if Giovinazzi won't be at Ferrari in 2018, he may be receiving another year of preparation on Ferrari's money, at a midfield team like Haas, Sauber, or Force India.