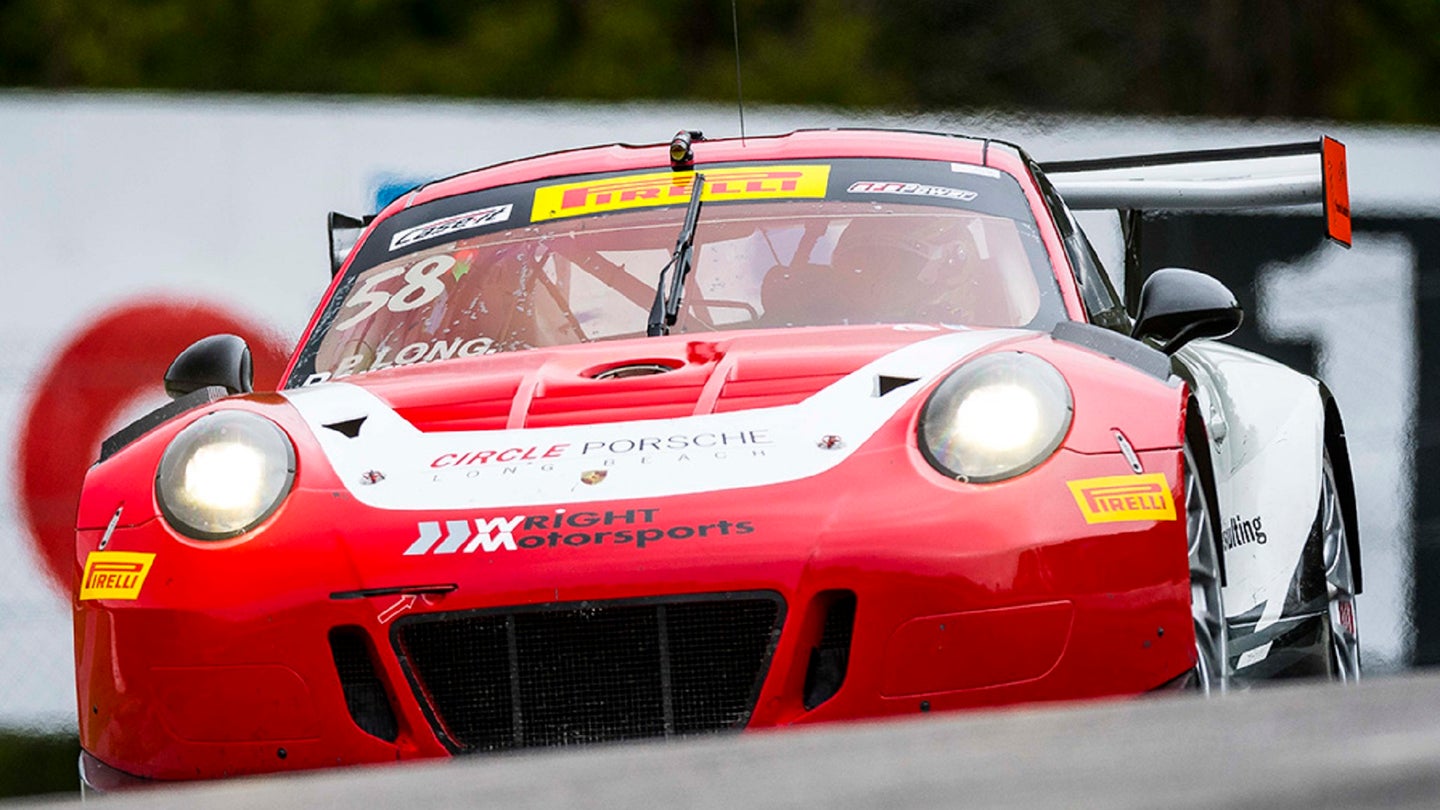 This weekend the Pirelli World Challenge sports car series fled north of the border to race at Canadian Tire Motorsports Park in Ontario. The weekend was intended to house a pair of Sprint-X rounds, in which drivers of each car share with a team-mate in the one-hour sprint race, pitting for a driver change between the 25 and 35-minute marks. Sunday's race featured heavy downpours of rain, so the round was eventually postponed until later in the season. Saturday's race, however, featured some excellent wheel-to-wheel action, as well as some pit strategy subterfuge.

Saturday started off with the Wright Motorsports Porsche of Pat Long and Jorg Bergmeister on the pole at the front of the grid. Pat Long is an ace at CTMP, and celebrated his successful Luftgekuhlt show in LA by setting a new track record for GT3 spec machines at the circuit. In that same qualifying session, Cadillac's Michael Cooper failed to set a lap time with a mechanical failure, relegating him to the back of the grid for the race. As the green flag fell, Long streaked off at the front of the grid while Cooper set about picking off his competitors in his way toward the front.

When the pit-window opened at 25-minutes into the race, most of the leaders came in to get their driver-swap out of the way. Cooper, meanwhile, stayed out on track passing everyone as they were in the pits, banking on track position to help him before it came time to serve his own driver change. As luck would have it, on lap 24, the yellow flag came out for a crash and Cooper was able to dive into the pits at the last second while everyone else was forced to slow down to get picked up by the safety car. Cooper, being the leader, should have been the car picked up by the safety car, but instead, they went with Pat Long's teammate, Bergmeister in second place. Cooper was able to swap seats with Jordan Taylor and get Taylor back out on track before the line of cars passed the pit lane, and they rejoined retaining the lead and zoomed around the track to join the tail end of the field, nearly a full lap up on the rest of the competitors.

From that point Jordan Taylor was able to coast to the finish with his lead intact, winning the race by a margin of 45 seconds. Bergmeister was reeling in the lead at a rate of nearly 3-seconds per lap, but the gap was insurmountable. The Porsche team had to settle for second, which pays 23 points in the championship, moving Pat Long up into the lead of the PWC GT class. Alvaro Parente, the previous leader, only made it 21 laps into the race before retiring, netting him zero points. Michael Cooper's 25 points scored for the victory gets him up into second position, just 2 points shy of Long's total.

“The race overall was actually Virginia, version 2.0. I was behind Jan (Heylen) and when we went into traffic I managed to catch him. It’s quite funny because not many people know that he was my coach when I was in go-karts. He’s a very good friend and we even drove together in go-karts where he taught me to overtake. I think he regrets that now. It was fun, it was a hard race. I managed to go well through traffic and we won.”