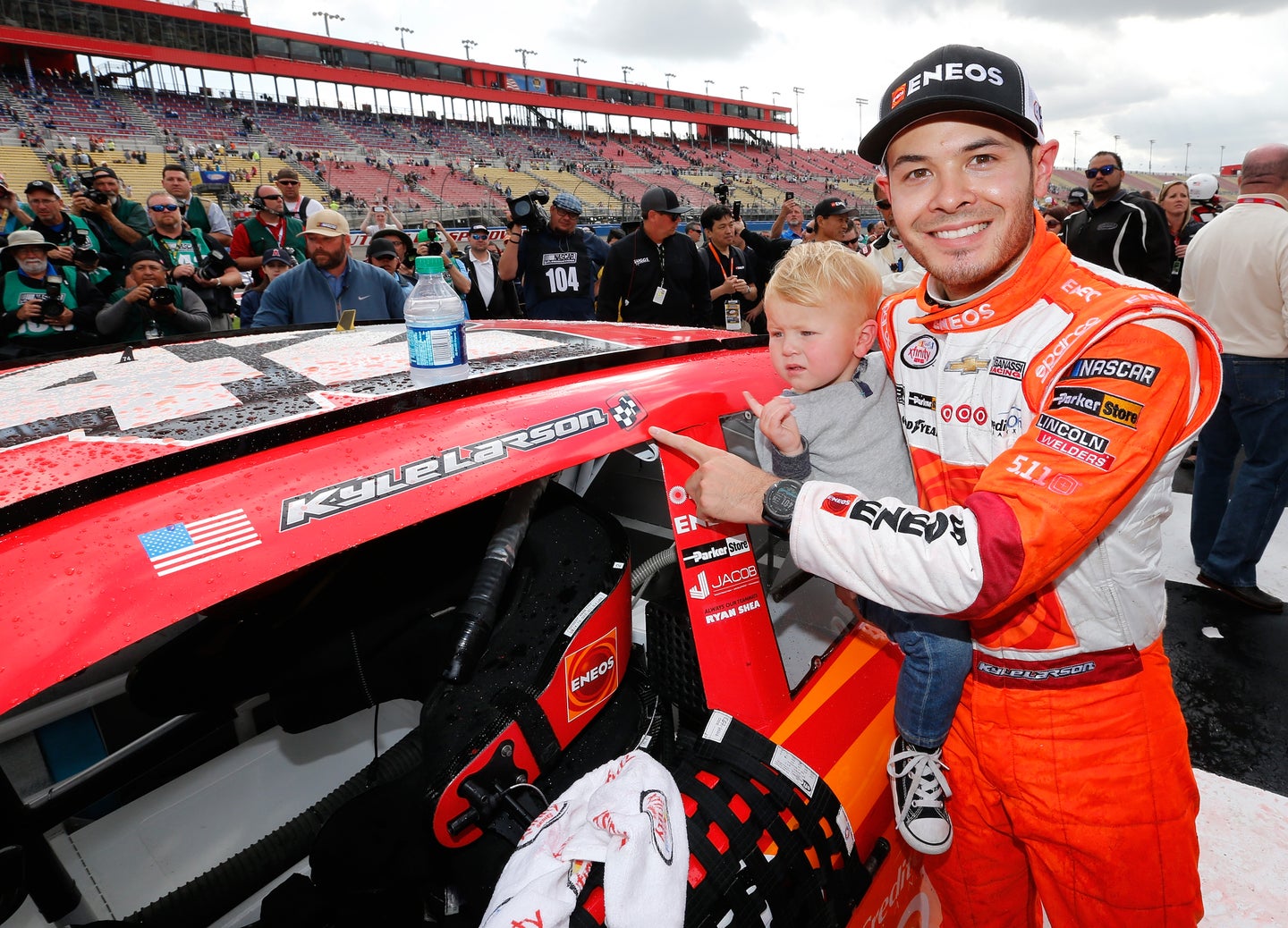 The monkey on Kyle Larson’s back has fled the scene, thanks to the Ganassi Chevrolet driver’s 0.779-second victory over Brad Keselowski in today’s NASCAR Monster energy NASCAR Cup victory in the Auto Club 400 in California.

The past three races, Larson finished second, but he had no intention of making that four in a row today. Often criticized for a lack of aggressiveness – at least in NASCAR, never in sprint car competition – Larson qualified on the pole and was the class of the field through all three stages.

Here’s what he said afterwards: “I was staying as calm as I could be, but also frustrated at the same time.  It seems like every time I get to the lead at the end of one of these things, the caution comes out and I’ve got to fight people off on restarts.  Our Target Chevy was amazing all day.  We were able to lead a lot of laps today.  (Martin) Truex was better than us that second stage by quite a bit.  We were able to get the jump on him the following restart and led pretty much the rest of the distance.  I had to fight them off there after the green flag stops and that was a lot of fun.  I can’t thank Target enough, Credit One Bank, all of our partners, Chip Ganassi, Rob Kauffman, Felix Sabates, I hope you are feeling better at home, wish you were here.  This is just amazing. We have been so good all year long, three seconds in a row.  I’ve been watching all the TV like ‘he doesn’t know how to win’, but we knew how to win today, so that was good.”

Is the pressure off now? “Yeah, no doubt.  I made a mistake early in the race and lost a lot of track position sliding through my(pit) box, but they had awesome pit stops all day long.  Great pit stops there at the end especially and our restarts were good.  I spun my tires a couple of them and had to drag race Denny (Hamlin) and Kyle (Busch) into Turn1, but we had a good last restart, got some clean air and came on to the win.  Like I said, I can’t thank everybody up here enough and everybody at the shop too.  They have been working their tails off all off season and it’s carried over into this year.  It’s spectacular all the hard work is paying off.” Indeed, it was a double, after Larson took the win in yesterday's Xfinity race, too.