Ferrari said they'd be strong for this year, but they've been saying that since 2015. Seems like they meant it this time. 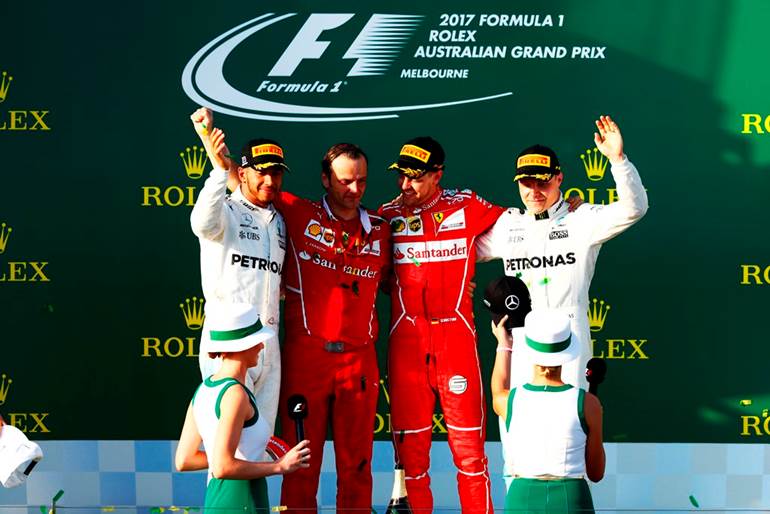 Well, that kind of sucked if you are a fan of the lone American F1 guys, Haas F1 Team, which now goes into its second year, apparently having not yet drained team owner Gene Haas’ bank account. Interviewed on the grid moments before the start of the Australian Grand Prix, Haas seemed quietly confident, but then Gene Haas always seems quietly confident.

It only took three turns for half of Haas F1 to crater: New driver Kevin Magnussen, the son, of course, of IMSA Corvette Racing driver Jan Magunssen, who won his class at the Mobil 1 Twelve Hours of Sebring last weekend, visited the gravel trap after a collision with the Sauber of Marcus Ericsson. Both cars continued, but Magnussen’s car suffered some suspension damage. He soldiered on but dropped out 11 laps short of the finish, in 15th.

“We changed the front wing and then I went for a long test session to feel the car and learn a bit more about it, which was good. It feels good and the car is fast,” Magnussen said. “That’s the really positive thing from this weekend. The car is there. We just have to make it finish and score points.” At least he beat Lance Stroll. Barely.

The race started out much better for teammate Romain Grosjean, who qualified sixth, Haas’ best showing ever. He settled into seventh, remaining there for 13 laps until a coolant leak sent him to the garage. He finished 20th.

Aside from the weird aborted start—for which there apparently was no good reason—and the fact that hometown hero Daniel Ricciardo wasn’t able to get his Red Bull machine into gear, started two laps down and then retired soon after, the race was comparatively uneventful, but consistently entertaining, despite seven DNFs. Apparently you can have an F1 race without Bernie Ecclestone, or even Nico Rossberg.

Of course, the race sucked far less if you are a fan of the Prancing Horse, or at least a member of the anybody-but-Hamilton camp. Sebastian Vettel and his Ferrari resoundingly whipped Hamilton with a stunning margin of victory over the Mercedes driver of 9.975 seconds, with fellow Mercedes driver Valtteri Bottas in third and Ferrari driver Kimi Raikkonen in fourth. It was Vettel’s and Scuderia Ferrari’s first win since the 2015 Singapore Grand Prix, and suddenly Formula 1 racing is kind of interesting again.

Even Lewis Hamilton seemed upbeat about how fast the Ferraris are in the post-race press conference: “A big congratulations to Sebastian and Ferrari. I know it’s been a long time coming for them to get a result like this. It shows we are going to have a race on our hands, which we are very happy to have, which is great for the fans.”

Next up: The Chinese Grand Prix April 9 at the Shanghai International Circuit, a track I personally mastered. In an electric car. At about 30 mph. So Sebastian, you need any pointers, you know where to find me.