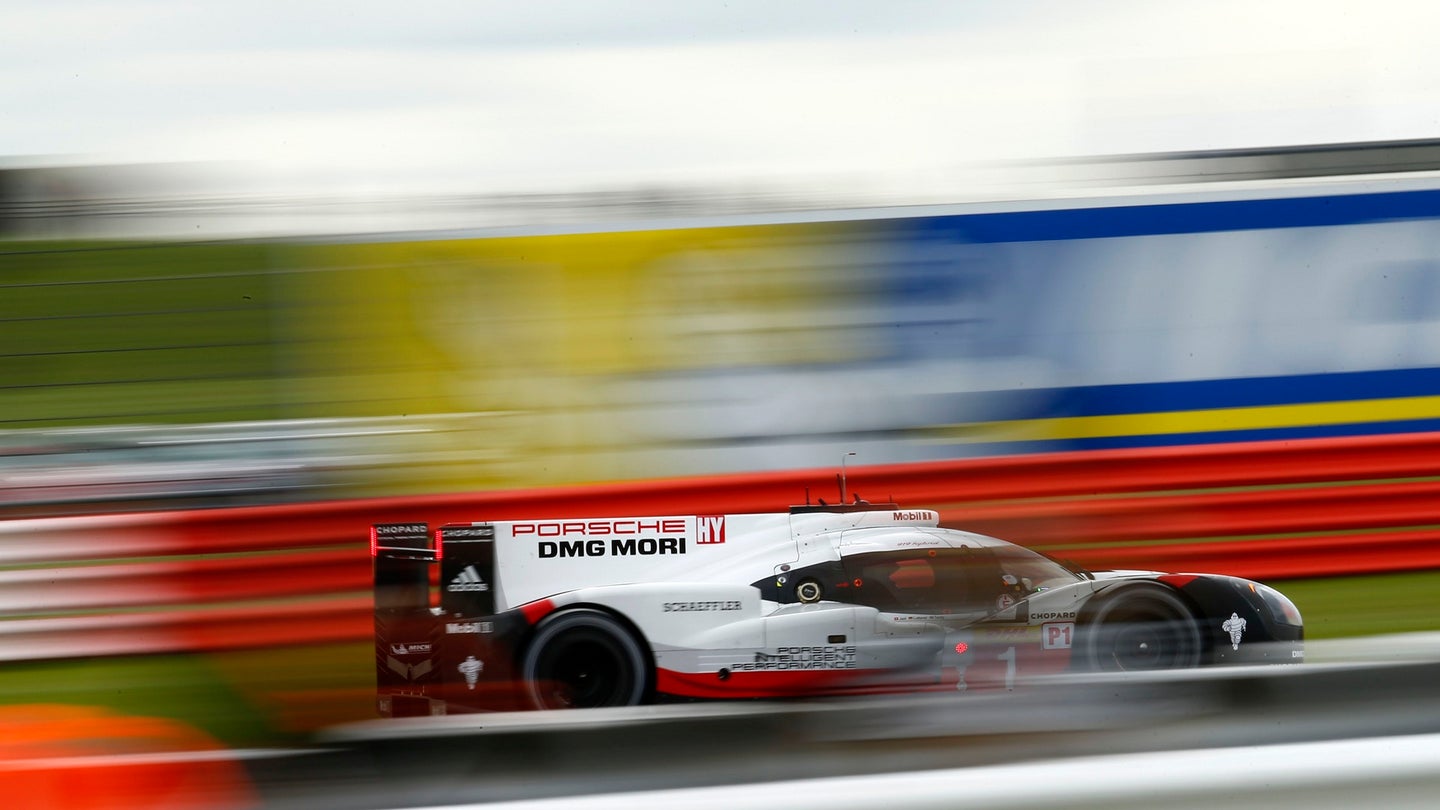 Porsche's 919 Hybrid LMP1 teams have already resigned themselves to the fact that they have very little chance of victory in Sunday's 6-hour endurance race at the famed Northamptonshire Grand Prix circuit Silverstone. Last year at this track, the race was won by an Audi R18 e-Tron quattro, which was then disqualified for being out of spec in post race tech, handing the win to the Porsche team. This year, Toyota looks far stronger at this track than Porsche, largely due to each team's choice of aerodynamic specification. Toyota have opted for a high-downforce aero kit for this race, which suits Silverstone well. Porsche, however, are working on their Le Mans-style low-drag aero kit in an effort to gain some advantage at the most important circuit on the calendar. That's a bold strategy, Cotton. Let's see if it pays off for them.

In Saturday's qualifying session, Toyota locked out the front row of the grid, setting times over a second quicker per lap than the Porsche LMP1 teams could muster. Qualifying at Silverstone today was a completely dry session, while Sunday's race is expected to see at least some wet weather running. Unfortunately for Porsche, wet weather hands an even greater advantage to the high-downforce Toyotas. With four laps averaged out across two drivers, the championship defending #1 car of Neel Jani and Nick Tandy could only run an average 1:38.615, good enough for third on the grid. Andre Lotterer and Earl Bamber in the #2 Porsche could do no more than a 1:40.223, which sets them right at fourth. Toyota will be starting the race from 1st and 2nd.

Quotes from the team after qualifying:

“It was a very deliberate decision before we came here to focus our aerodynamics completely on Le Mans. It was crystal clear that this meant a disadvantage for Silverstone. This has a smaller impact in the race than for a single fast lap, but it will definitely be a disadvantage tomorrow as well. We fully back the decision and will get through the consequences together. I’m proud on our driver line-up. All six are performing on a very high level and also handle the current situation very well.”

“Both cars worked fine all day and the team and drivers made an excellent job in qualifying. The grid positions, as well as the gap to the front, are what we have expected. We keep focusing on race preparation. We want to remain in striking distance to Toyota and try to put them under pressure.”

“This is undoubtedly the best 919 I've ever had the privilege to drive. It was fantastic with super high-grip which gave me confidence. The gap to the opposition is more than we'd like but we have set different priorities. The race should be much closer.”

“We finished fourth in qualifying but we put zero focus on this element – it's been all about long runs for race preparation and they've gone well. We believe we've a very good racecar for tomorrow.”

Porsche's newest iteration of the 911 RSR, as you all likely know by now, is a mid-engine out-and-out racing car that has already shown flashes of brilliance at the 24 Hours of Daytona, the 12 Hours of Sebring, and the sprint race at Long Beach last weekend. The car's fourth race will kick off tomorrow at Silverstone for a 6-hour endurance run in the World Endurance Championship. The American-based IMSA runners have shown reasonably well, and the international WEC team hopes to kick off with similar good work, minus some of that bad luck.

The teams have noted that they were focussed more on a race-pace run in qualifying rather than setting an outright fast lap time. Of course, they're going to say something of the sort when they are sitting 7th and 8th on the grid, some 1.8 seconds off the pole time set by Ford's GT team. If Porsche's GTE teams have opted for a reverse strategy from the P1 team, and are clamping on as much downforce as they possibly can in expectation of rain, then that could explain a time deficit in this class. We'll have to wait for the race to start to see if they have anything close to the pace of the other Ferrari, Ford, and Aston Martin teams.

Quotes from the team after qualifying:

“With an eye on the tires, we implemented a very conservative strategy in this qualifying session. The fact that we’re only permitted four sets of tires per race this season instead of six made this issue even more important. The result is about what we expected. We will continue to focus on the race.”

“In my first lap, the balance wasn’t quite right. I had more grip in the second lap, but I made a little mistake. I think we have good tires for the race. Despite everything, this makes me confident for the race.”

“As expected, the qualifying was difficult. We concentrated totally on the race in our preparations, so the performance on a qualifying lap was, of course, not outstanding. However, I believe that we’ve chosen the right strategy.”