Our Favorite Porsche Moments Of 2016

This year was generally a mess, here’s a few times it was pretty great for Porsche fans 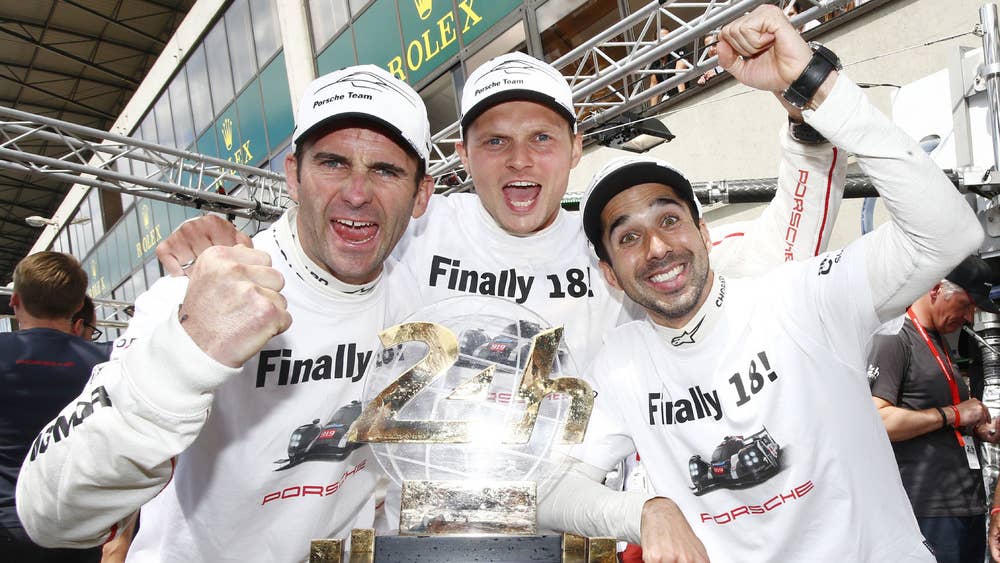 2016 is winding to a close, and we're taking a look back at our favorite moments from the year in relation to Porsche cars and the folks who love them. This is a year that will likely be remembered as difficult for many people, as it was packed with pessimism and bad news around every corner. For Porsche folks, however, there is much to reflect on and find happiness within. This was a year that gave us Porsche motorsports champions, myraid new car launches (or at least substantial revisions), big-dollar high-profile collector car sales, and astonishingly cool events to attend. Join us as we recount the year from the perspective of a Porsche nut.

8 - Porsche's first Le Mans winner gets the restoration it deserves

Officially unveiled in its newly restored state as a competitor in the Pebble Beach Concours D'elegance, this 1949 Porsche 356SL is decked out in as-raced trim from the 1951 running of the 24 hours of Le Mans. While the car was originally shown at last year's Rennsport Reunion, it had not yet recieved its final coat of paint, and the car was not functional. This year, the car, as is customary, drove under its own power onto the lawns of Pebble Beach to be judged. We were there as the car rolled into place, and it was a spectacular sight to see. A gorgeous restoration by Rod Emory and his band of misfits brought this car back to its old life after years of obscurity. This is a car that deserves respect from Porsche fans, as it possibly shaped Porsche's desire to continue racing at Le Mans. How would Porsche be different if they hadn't continued to pursue Le Mans glory? We owe that to this very car.

New this year was a massive update of the company's popular two-seat mid-engine coupe and roadster. Now fitted with the 718 moniker and a small bore turbocharged four cylinder, the new car certainly is quite different from the one it replaces. This is a car that drives, in every way, better than the car it replaces. We do wish it sounded better, however. An excellent car let down by its lackluster exhaust note. We drove the car earlier this summer, and it was a great time in Texas. This is certainly a car that we'll look back on fondly in coming years.

6. The Launch Of The New Panamera

Porsche's new Panamera is ostensibly better in every way than the car it replaces. Everyone is going gaga over the car's new exterior design, and it certainly is fetching. On the inside, however, it's more comfortable, more tech-savvy, and bigger. Under the hood, it's got new, more powerful engines that help it storm the Nurburgring or the daily commute. This car is frighteningly cool, from its new Audi-derived "Virtual Cockpit" screens to its massive wheels and tires. We really look forward to getting behind the wheel of this car.

5. The Launch Of The New Macan GTS

This one might seem a little bit less important in the grand scheme of things, as this is, at first glance, nothing more than a trim package with a slight power boost. The Macan GTS, as it turns out, is so much more than that. This is a CUV that you can drive back and forth to work on a daily basis, and still somehow enjoy on a hilly backroad. It's faster, quicker, and handles better than any car this size has a right to. We drove this car up Pikes Peak at speed, following Pikes Peak champion Jeff Zwart all the way to the top, and loved every minute of it.

It seems like it was ages ago now, but Jerry Seinfeld sold a bunch of his collectible Porsches for an absolute fortune during the Gooding & Co. Amelia Island auction this spring. Everything from a 550 Spyder and a 911 RSR IROC to a Carrera GT prototype, Seinfeld was offering up a not-insignificant portion of his collection. It was an amazing auction, and ultimately put just over 22 million dollars in Jerry's pocket. He's pretty secretive about what he kept and how many cars exactly that he owns, but it's quite extensive. Hopefully he put that money toward buying some more cool and historically significant Porsches.

It's always exciting and important when Porsche launches a new 911. This particular 911, with a downsized flat six and forced induction, is a bit polarizing. There are some Porsche enthusiasts who lament the loss of natural aspiration, but we drove the new car this summer, and loved every minute of it. It's a great new move for the 911, and the base Carrera is as fun as all get-out to drive in the hills of Northern California. This might be the best new 911 since the switch to watercooling was made in the late 1990s. Don't believe us, go test drive one. You will not regret it.

This is a car show that absolutely beggars belief. Porsche folks from all over the country went to Los Angeles for the weekend to celebrate everything air-cooled and Porsche. This was the third show of its name, and by far the largest. Pat Long and Howie Idelson are really onto something here with this show, as it continues to grow and continues to gain traction in an increasingly skeptical world. It was well worth the trip for us, as we got these gorgeous photos from the event!

What was nearly an historic moment for Toyota turned into a last-minute historic moment for Porsche. It was heart-breaking and uplifting in the very same moment. We were devastated for Toyota, as fans of the sport it would have been stellar to see them overcome the 24 hour race and persevere to the finish. Ultimately that was not to be, as Porsche swept by the stricken Toyota with just a handful of minutes remaining in the 24th hour.

We were in attendance, watching on from the Dunlop Curves as the race wound to its finish, and that moment will stay with us forever. What a race. What a year.

Experiencing Le Mans For the Very First Time, and Not Caring