The Racers Group Returns To Porsche For 2017 Season

Kevin Buckler’s TRG team last won Daytona with a Porache GT3 in the Grand Am GT class back in 2011. Now they’re back, and looking for more victories. 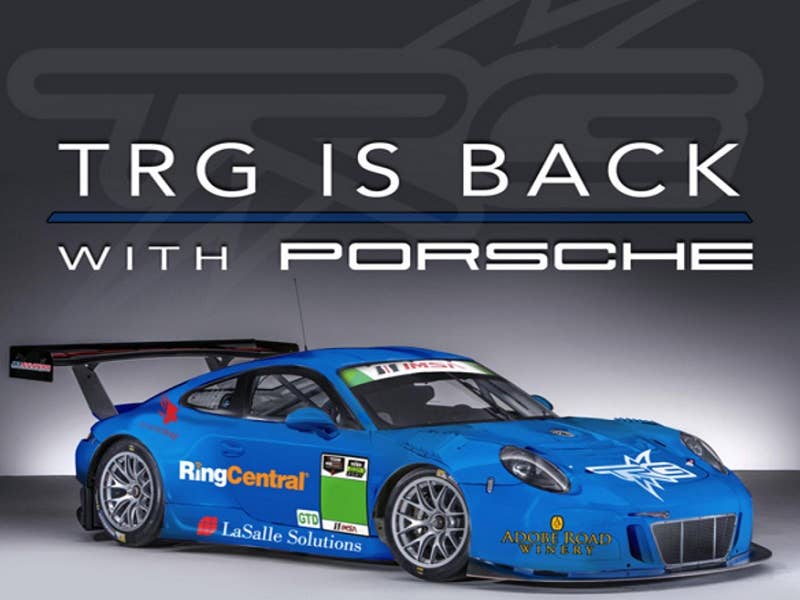 Kevin Buckler's TRG team last won Daytona with a Porache GT3 in the Grand Am GT class back in 2011, and I was there to watch the whole thing unfold. I've been watching the TRG squad racing in Porsches for as long as I can remember, well, at least until they defected to the Aston Martin efforts a couple years back. For the 2017 season, however, they'll be returning to the flat-six squad with at least one car for the full GTD class season. While they will be continuing their Aston Martin efforts, likely isolated to GT4 class racing in Pirelli World Challenge, and their successful Lamborghini Super Trofeo efforts, their banner efforts in GTD will be with Porsche. The team is in talks with a number of drivers for the 2017 season, hoping to add a second car to the mix as well. If you're a qualified gentleman driver with a decent budget, chances are you have already been contacted by TRG for 2017, but in case you haven't, maybe give them a call.

For the full press release, continue reading below.

The Racers Group will contest their 22nd consecutive Rolex 24 Hours at Daytona with a fantastic and authentic return to the marque that brought them record-setting success: Porsche. The Kevin Buckler-led squad will be contesting the entire IMSA GTD season, poised to continue an incredible legacy. TRG is currently in talks with multiple drivers for both Daytona and the full IMSA season and is working on a second car as well. The team will continue to maintain its strong Aston Martin Racing program alongside its Lamborghini Super Trofeo and Porsche club racing endeavors in a variety of different series throughout the year.

TRG has a proud history with Porsche. Buckler himself won the 2002 Porsche World Cup, and he and the team won the GT class of the Daytona 24 with the German marque four times – including once overall in 2003, a historic moment in motorsports that may never again be replicated. The team has achieved 13 Daytona podiums with Porsche, holds the record for the most number of entries in history, and ran an incredible five cars, or more, for eight years in a row. An international highlight of the team’s success with this brand includes a win at the 2002 24 Hours of Le Mans on their first try, in one of the closest GT races in history. Dozens of wins, multiple consecutive podiums, and an era of prestige exemplify over two decades of partnership with Porsche.

However, this global success didn’t happen overnight. In 1992, Buckler and his soon-to-be wife, Debra, attended the first ever PCA National Club Race in Second Creek, Colorado, where they began racing and managing their car maintenance and repair work on their own dime. Eventually, Buckler began crafting his own race parts for his early Porsche 911, revealing a competitive edge at the dawn of his racing career. His peers on the track began to notice his car’s success and asked him to make parts for them as well. Thus began The Racers Group parts operation, which the Bucklers operated from their garage near Laguna Seca raceway in Monterey, CA. From there, the duo traveled from race to race across the U.S., moving up in the ranks of sportscar racing and laying the groundwork for a powerful network in the industry along the way. After pulling himself up by the bootstraps back in 1992, landing his first Pro win in 1995, Buckler’s insatiable drive and determination led the team through their long string of victories, establishing themselves as one of the most successful GT Sportscar teams in history.

TRG’s return to Daytona with the marque that set the pace for the team in the early days is cause for celebration. Buckler is no longer in the driver’s seat, but as team owner, he’s determined to give fans, old and new, the best showing possible. The group has evolved from grassroots club racing days to one of the most recognized names in North American motorsports, and has developed a premium marketing platform to amplify their success – while still supporting PCA Club Racing drivers. Buckler’s business acumen and global network of high-profile partners equate to a rich B2B environment in the paddock and much success for the team's sponsors. Dozens of corporate partners looking for client and guest entertainment have made the move from traditional golf outings or stadium boxes to TRG’s premier race hospitality. The team’s proximity to Silicon Valley has drawn an enviable group of prolific high-tech organizations – including LaSalle Solutions, RingCentral, and Crowdstrike – to activate with the motorsports marketing platform, with ample opportunities for more to join.

A unique blend of legacy, business and entertainment will once again come together for the 2017 season at the premier North American sportscar racing event of the year – the Rolex 24 at Daytona.

“All of us at Porsche Motorsport North America are looking forward to seeing a new 911 GT3 R in the traditional TRG livery once again,” said Jens Walther, President and CEO of Porsche Motorsport North America. “Kevin and his team have been responsible for many Porsche GT victories over the years, including an overall Rolex 24 victory in 2003. We warmly welcome him back to the Porsche family.”

“Well I don’t think it gets much more ‘full-circle’ than this,” said Kevin Buckler, CEO of The Racers Group. “I was a fan of the brand back in high school and bought an old ‘73 911 in the early 80s. Since then I always had a Porsche in the garage and many times on the autocross track up until my first track day at Road America in 1988. I was hooked! Debra and I attended the first ever PCA National Club Race in 1992 and drove the truck and trailer all over the US in the early 90s just trying to get the company started. I really wanted to do this as a career, race professionally and build a viable and sustainable motorsports operation. Things have changed in so many ways and the business has become so diverse and complex, running multiple brands and we are finally at a point where corporate America is joining us in our motorsports endeavors. Today, we are proud to announce that we are back with Porsche as our premier brand running in the 2017 IMSA WeatherTech Championship. It feels right. We are currently in talks with multiple sponsor partners, drivers, and are working on a second car and program.

“The entire team at IMSA has just done an amazing job building this motorsports platform. I’ve been beating the GT drum for 25 years and was with them in the beginning, and it has not been easy. I’m pleased and honored to be part of their history and heritage and now we’re back running full-time in WeatherTech. They’ve assembled a stellar team of individuals and their procedures and processes are strong. The real proof is the strength of our class in terms of drivers, teams and manufacturers.

“The Porsche support program has been second to none over all these years and it will be nice to have them by our side once again. It’s also going to be nice to be racing with some of my old friends that are still at Porsche. As we move into our 26th year as a company, the future of professional sportscar racing is strong and I am glad to be doing my part to help lead in any way I can. And, oh yeah….we really like to win!”

The team is thrilled about its increased presence with Porsche in IMSA and also its continuation with its strong Aston Martin and Lamborghini programs. TRG has just finished a successful Pirelli World Challenge season, taking both the Team and Driver’s championships in the SprintX GTS category with its V8 Vantages, and plans to enter IMSA’s Continental Tire SportsCar Challenge with the same cars. Its first season with Lamborghini Blancpain Super Trofeo North America has proven to be a positive endeavor, resulting in multiple podium finishes, a stellar hospitality program, and an upcoming World Finals weekend in Valencia, Spain. Finally, TRG’s long-running involvement with Porsche via its Club racing series will continue with its Porsche Cayman GT4 Clubsport cars. TRG’s 2017 season is shaping up to be one of the most diverse ventures for this classic sportscar racing team, driven by a tried-and-true mantra: to be “Relentless.”

History of Success with Porsche: