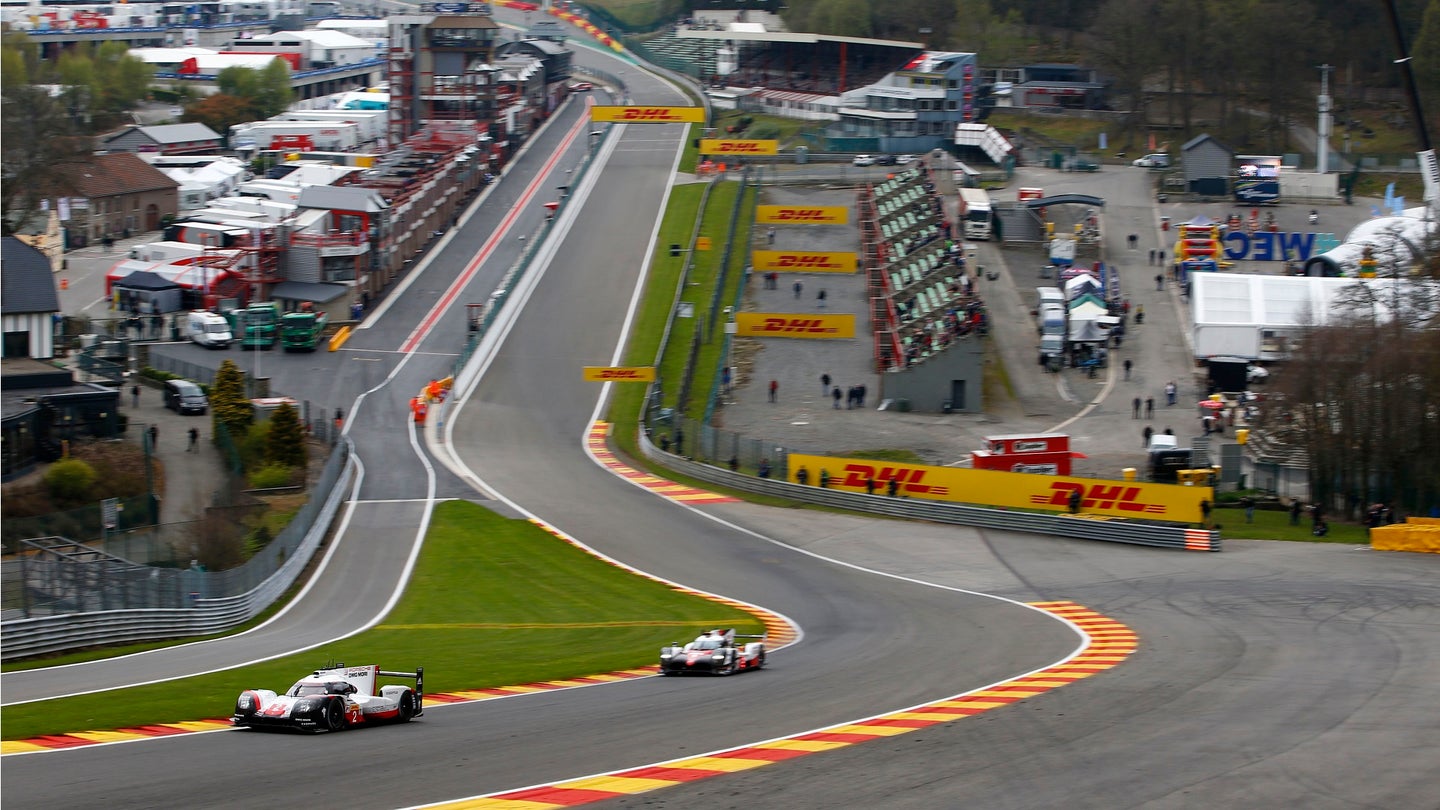 Porsche factory ace Neel Jani teamed with Audi refugee Andre Lotterer to put their shared #1 919 Hybrid on the pole position for tomorrow's 6-hour race at Spa-Francorchamps. Toyota is pulling out all of the stops in an effort to win at Le Mans this year, hauling out three LMP1-class TS050 prototypes for the Spa and Le Mans rounds of the World Endurance Championship this season. That trio of Toyotas qualified just behind the #1 car in second, third, and fourth, with the second Porsche 919 Hybrid, qualified by Timo Bernhard and Brendon Hartley sandwiching them in fifth. To put a point on how competitive LMP1 is these days, the pole time was (an average of the two fastest laps from two drivers in each car, four laps total) a super quick 1:54.097, and the #2 Porsche in fifth ran a 1:55.440, just over a second behind.

"Unexpected and unbelievable - pole position in Spa! We knew our Porsche 919 Hybrids were good on the long runs but this qualifying result is a surprise and it proves what a great job the guys in Weissach did over the winter. From P1 we can now really hope for a thrilling race.”

“Congratulations to our crew number 1 for a well-deserved pole position. Neel and André did excellent laps. It feels nice to be back on pole again since the Shanghai race last November. Timo and Brendon had the same speed, but we couldn’t manage to bring it all together. However, with P1 and P5 on the grid we are well positioned for the race and also well prepared after focussing on long-runs in the practice sessions. We will definitely see a tight and exciting race tomorrow. Both manufacturers in LMP1 operate on an impressive lap time level.”

“My first attempt already went very well but then the session was red flagged. We fitted another set of fresh tyres and on my second lap I knew perfectly well the grip level in every corner. Then André did a great lap as well. Our 919 has never been as fast in Spa as it was today and we could not have believed beforehand it would be enough to take pole position in front of the Toyotas. It is a big result for our team. I also think we are well prepared for the race. We have used the morning session to continue set-up work. Tomorrow we expect it to become warmer and it will be exciting to see what this does to us.”

“We couldn’t ask for more! For the opening drivers, it was a bit hectic due to the red flag so they had to go again. Neel used the maximum potential of our Porsche and drove really fast in his second run. Over the radio, he informed me that there was a lot of grip [on the track] allowing me to push hard. I’m really happy to achieve pole on my first qualifying run with Porsche. It is very important for the whole crew but also for my self-confidence. Now we are in a very good position for tomorrow’s race. Our aim has to be to win.”

“Congratulations to our sister car for pole-position - it's a great result for Porsche. For car 2 there were a number of issues in qualifying which we must now investigate. In the practice sessions over the past two days we have been good in the long runs so everything is still possible in the race.”

“We were very unlucky. I had a good first lap and was looking at P1 but lost the time due to a red flag. When the session resumed, I had traffic then encountered a small systems problem, which prevented me from challenging for pole. Our car was definitely quick enough. We're confident we have a good car for tomorrow having focussed on race set-up in the three practice sessions.”

Porsche's pair of 911 RSR runners in the GTE Pro category, with the #91 car driven by Frederic Makowiecki and Richard Lietz as well as the #92 car driven by Kevin Estre and Michael Christensen, have qualified fifth and sixth on the grid for tomorrow's 6-hour race, round two of the Sports Car World Endurance Championship. Because of the new WEC tire use rules, both Porsche teams opted to run abbreviated qualifying runs to preserve tires for the race. #91 Porsche qualified in fifth, while the #92 came home just behind in 6th. The pair of Ferraris split the pair of Fords for first through fourth, with both Porsches just ahead of both Aston Martins. Luckily, in these long endurance races, qualifying isn't quite as important, as the race will shake out the differences in fueling and tire degradation.

The still rear-engined 911 RSRs of a few seasons ago are entered in the GTE Am category with a pair of customer teams running them. Gulf Racing UK qualified in fifth place in class with Nick Foster, Ben Barker, and Michael Wainwright sharing the car. The Dempsey Proton Racing car set a time good enough for second on the grid with Porsche Young Professional Matteo Cairoli sharing the car with Christian Ried and Marvin Dienst.

“We’re not surprised about our qualifying positions, because we’re implementing a different strategy compared to Silverstone. During qualifying, we deliberately focussed on preparing for the race and after the first hour of racing we’ll know how we measure up to the competition with the new 911 RSR.”

“We were hoping we’d do a little better in qualifying, but the grip wasn’t quite what we wanted in my first lap. If the temperature gets warmer our tyres should perform better, so in this regard I’m feeling quite optimistic.”

“Our qualifying went well. Let’s see what effect the difference to the top qualifying time will have on Saturday’s race.”

“I’m not completely happy with our qualifying performance, but we’ll see what happens in the race. Six hours is a long time and we’ve been very sparing with our tyres.”

“You noticed how every manufacturer had a different strategy when it came to using fresh sets of tyres. We were very conservative in qualifying, but it’s what happens in the end that counts.”

“My qualifying lap was quite tough and I was pretty much at the limit. Taking up the race from second on the grid is good, but pole position is not so decisive in a six-hour race.”