New engines and new sizes for the sport sedan. 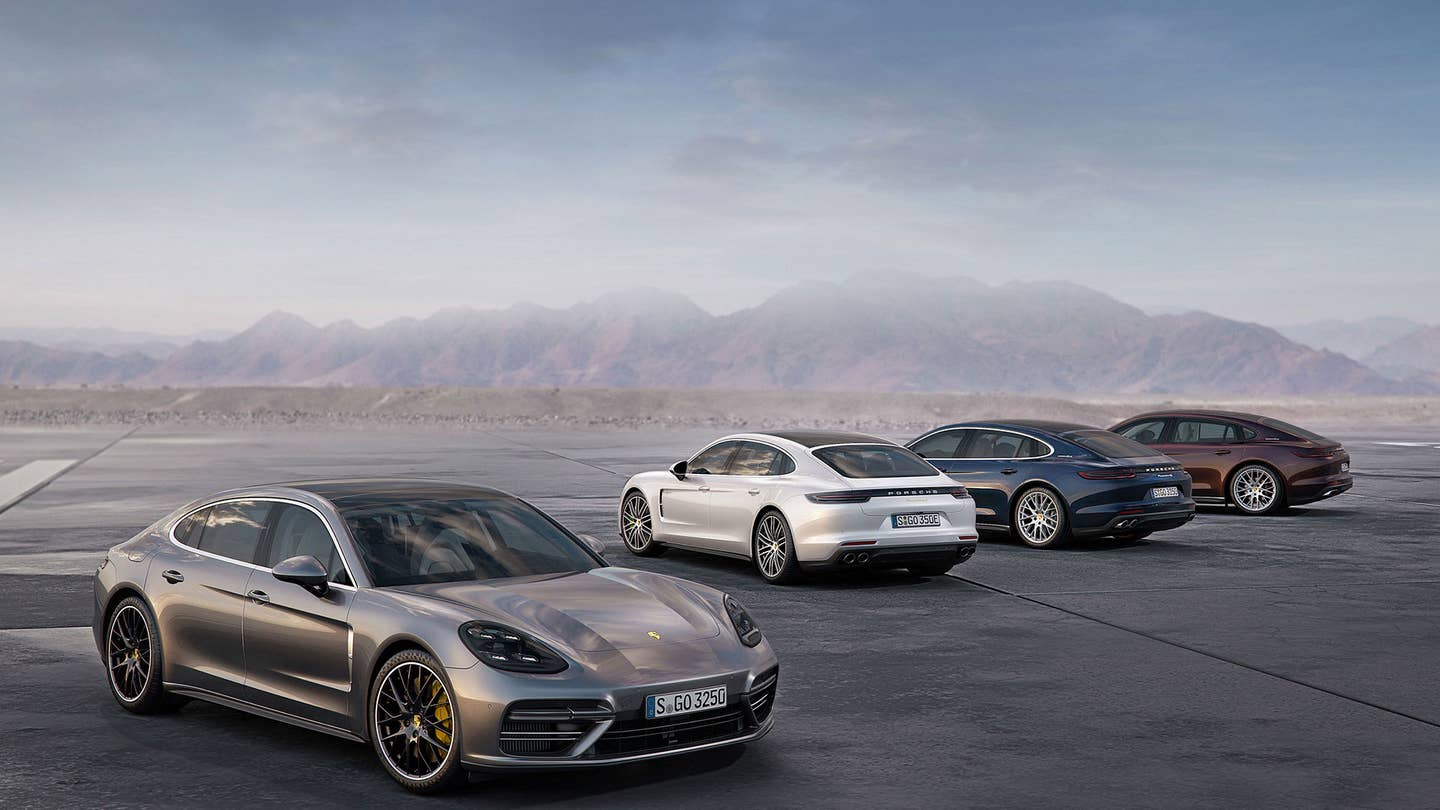 The Panamera range is growing—in more ways than one. Porsche has revealed six new Panamera models in advance of the cars’ official debut at the Los Angeles Auto Show next week, stretching the sport sedan’s lineup both upmarket and downmarket at the same time.

The less expensive end of the move comes in the form of the new Panamera base model, which arrives in both suffix-less rear-wheel-drive and all-wheel-drive Panamera 4 forms. Either way, the entry-level Panny comes loaded with a twin-turbo V6 cranking out 330 horsepower—20 more than the previous base car and its 3.6-liter naturally-aspirated six-cylinder. (Porsche didn’t reveal the engine’s displacement, but based on those figures, we’re guessing it’s the same 3.0-liter six-pot found in the Macan S and GTS—though it could be a detuned version of the 4S's 2.9-liter unit.)

On the high end, Porsche is once again rolling out long-wheelbase versions of the Panamera for those, for whatever perverse reason, would rather ride in the backseat than take the wheel. The Executive trim, as Porsche likes to call it, will be offered on all four all-wheel-drive models available here in America: the V6-powered Panamera 4 and 4S, the plug-in Panamera 4 e-Hybrid, and the V8-packing Panamera Turbo.

Springing for the Executive scores buyers a lot more than an extra 5.9 inches of wheelbase, however. The longer models also come with a litany of additional features as standard, including Porsche’s adaptive air suspension system, a panoramic glass roof, and heated comfort seats all around. Long-wheelbase 4S models also receive soft-closing doors and rear-axle steering as standard, while Turbo models earn those two features as well as bougie ambient interior lighting, four-zone climate control, and swiveling LED headlights that peer around the corner ahead.

And since the Executive Panameras are designed for the Businessman On The Go, Porsche is also offering a new rear console that contains fold-out work tables, as well as a rear-seat entertainment system that embeds a 10.1-inch tablet into each of the front seatbacks and allows aft occupants to check email, browse the web, or watch Internet video, such as this short little video about what it’s like to drive a Singer-modified Porsche 911. (*Cough cough shameless self-promotion cough cough*)

But no matter how rich or powerful you are, you can’t grab one of these lengthy Porsches today. Panamera deliveries begin in January of next year, with the 4S and Turbo models the first to arrive in showrooms.