Adam Carolla and Nate Adams are behind the new destination for premium auto content. 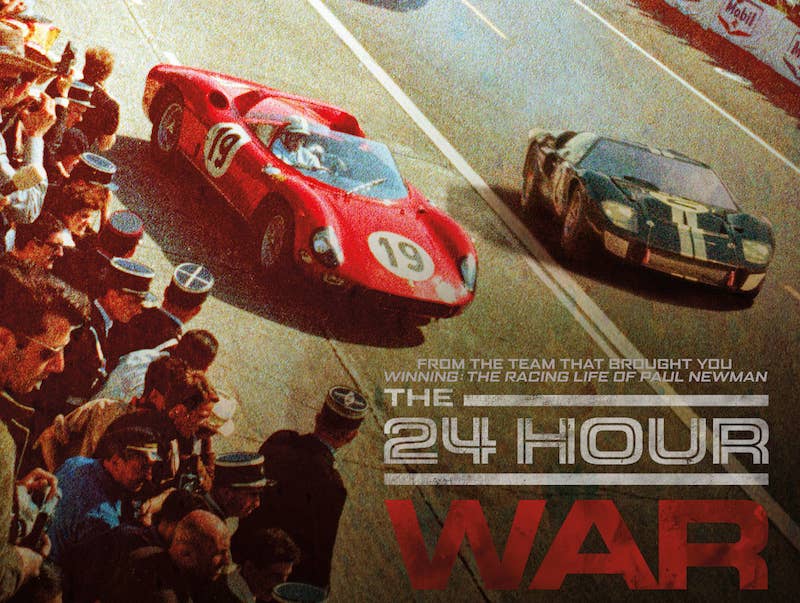 Last year, comedian, podcaster, actor and director Adam Carolla got together with director Nate Adams to work on a passion project about Paul Newman’s indomitable racing career. The result of their efforts was a gripping and touching documentary, Winning: The Racing Life of Paul Newman. It was nothing short of incredible, and the film's warm reception from beyond the motorsports community reflected that. Now, Carolla and Adams have teamed up to launch a new premium automotive video-on-demand service, Chassy.com, and they’re launching it with a brand new, equally-epic, racing documentary: The 24 Hour War, the tale of the Ford and Ferrari rivalry for Le Mans dominance in the Sixties.

More on the new film in a second. First, the rationale behind Chassy.com. "When it comes to car movies, you get one of two results: either a crappy movie made by a car fanatic who knows nothing about making movies or you watch Fast and the Furious and cringe at their lack of car knowledge,” said Carolla. “With Chassy, we've got car guys and movie guys coming together to make a superior product."

Auto enthusiasts can visit Chassy.com to either rent, stream or purchase premium content. Rentals are $4.99, while purchases are either $14.99 or $17.99 for a digital file or a Blu-ray. There’s a $2.00 discount for pre-orders, too. While there are a limited number of available projects to start with, that’ll rapidly change, Adams tells The Drive.

“We’re launching with Winning, and The 24 Hour War will debut on Chassy on November 22nd,” Adams said. “Down the road, we’re planning on having multiple short form series and some long form series. We’re also working on acquiring a number of completed series and films, too. Our first will be The Bug Movie.”

The film, out in mid-December, narrated by and featuring Ewan McGregor, is a “really moving story about the history of the people’s car, the Volkswagen Beetle, designed by Ferdinand Porsche for Adolf Hitler,” Adams said. “From those ominous beginnings came such a fun and ubiquitous car. There are movements of people who lovingly restore Bugs and this director tapped into that market. It’s great to have Ewan involved, too. He talks about the Bug and his passionate relationship with it; how it was his first car and how he drives it around Hollywood.”

Adams is equally excited about The 24 Hour War, which he and Carolla co-directed. “The hardest part of telling this tale was getting Ferrari’s perspective on the story. It took a year of incessant emailing and going through every means necessary to get some of the Ferrari guys on camera. It was so valuable to have their perspective, though. They’ve never participated in a documentary on this subject,” said Adams.

Only two marques won Le Mans in the Sixties: Ferrari dominated the first half and Ford owned the second. “Ford raced to sell consumer cars. Ferrari made consumer cars only to fund a racing career. The consumer cars were burdens to him. Enzo Ferrari was never a rich man. He spent every penny and leveraged everything he could to make sure he had the best for his racing team and the best for his cars. It was fascinating to unpack this iconic rivalry,” Adams said.

Approaching Ferrari was a touchy task. “I wasn’t sure how they were going to respond to us. Obviously, we all know the end result of this story. But they were adamant that they wanted their history to be known as well. They didn’t want a one-sided version of history,” said Adams. “We were able to get Mauro Forghieri, who was a then-26-year-old kid, barely out of engineering school. Enzo had fired all his top management and now Forghieri is the chief engineer for Ferrari racing and doesn’t know what to do. But he was instrumental in keeping Ferrari in the game."

Also in the pipeline, The Willy T Ribbs Story, a documentary about the first African American driver to race in the Indianapolis 500. “Adam and I are doing that one,” said Adams. “This was born from a five minute clip of him in Winning, where he infamously called Paul [Newman] a ‘hard dick brother.’ That’s still the most talked about bit of the film. Willy had a storied career. He was one of the best Trans Am drivers in the series, who used to dance on the top of his car when he won. At that time, racing was a very stoic – and white – sport, so a lot of people simply didn’t like him. That affected his ability to get quality rides. Here’s a guy who won Formula Ford in Europe, which is where almost all Formula One drivers come from, and he can’t get a decent seat.”

Carolla and Adams are still finishing shooting that doc, slated for release in 2017, though as of yet, Ribbs hasn’t called either a ‘hard dick brother.’ “He reserves that title for people he really likes,” Adams laughed. “Maybe at the end of the day, I’ll make into that club if he likes the doc.”

Watch the trailer for The 24 Hour War below.

The LeSEE Concept EV, Brought to You by China’s Netflix

LeEco sees its car as another portal for content, and a Tesla-killer.

Netflix and Chill vs. Chilling Adventures

The two most intense winter adventures this week won’t fit on an Instagram feed.