Modding a Nissan Frontier With Duct Tape and Gold Spray Paint Is a Really Good Idea, Turns Out Great 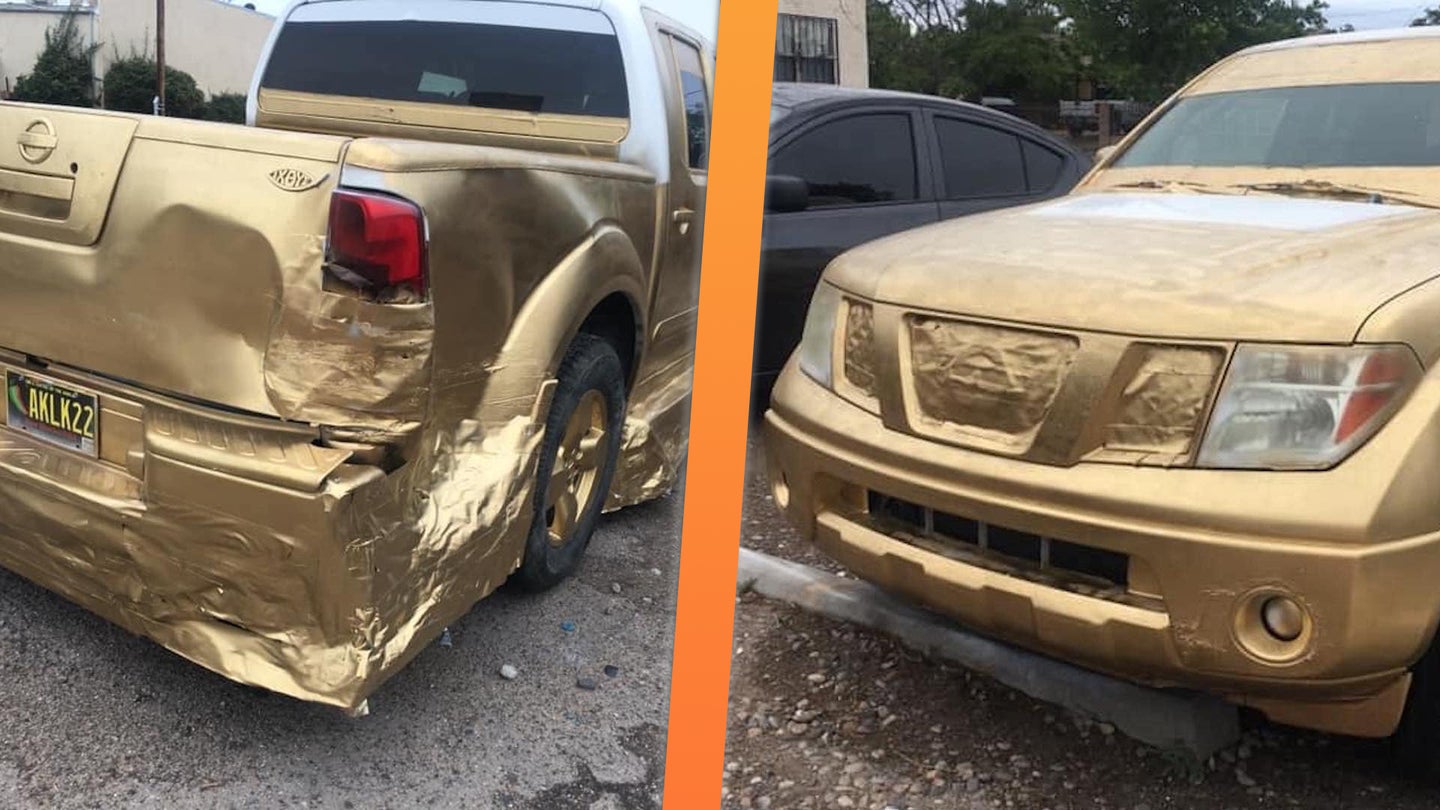 When I bought my Toyota MR2 Turbo several years back, one of the first things I did was replace its ratty, cracked front lip. But before its replacement went on, I slathered it in stickers, which I sealed against the elements with the most effective of clearcoat substitutes: packing tape. Naturally, the following winter stripped every inch of that tape, teaching me a lesson about half-assing car mods. And sometime soon, the owner of a duct tape-wrapped disaster of a Nissan Frontier will learn that same lesson.

Photos of said truck spread across social media on Wednesday, seemingly stemming from a Facebook post by one Adan Rmz Chevroletero. The truck's apparent owner bears little resemblance to the poster, who seems to poke fun at the truck's owner with a sarcastic quip.

"If you don't know about kustom don't talk!!" he says, per an automatic translation. "And if you don't have one you'll never understand!!!!"

Indeed, it's tough to understand what was going through this Frontier owner's head when they covered its grille in duct tape, suffocating its cooling system. If that doesn't present a cooling problem this September, it surely will in the heat of summer in New Mexico, where the truck is registered. If anything, though, the truck's owner didn't use quite enough tape to mask off the bodywork when they coated it with gold spray paint. There's visible overspray on the headlights, back of the cab and driver-side rear taillight—the other is partially taped over, hiding un-repaired collision damage.

While far from the classy car its owner presumably hoped to create, this Nissan will quickly teach him several things. The importance of a well-engineered (and well-built) built cooling system, the fallibility of adhesive and just how many people whip out their smartphones when they see something absurd to share with Twitter. But rather than point, laugh and judge like the rest of the peanut gallery, I'd like to encourage Señor Cinta Adhesiva here to give his vision of an ideal Nissan Frontier another shot after the duct tape falls off. Body filler, sanding and paint prep are the way forward for you, fella, and there are plenty of people online that'd be glad to help you master them.