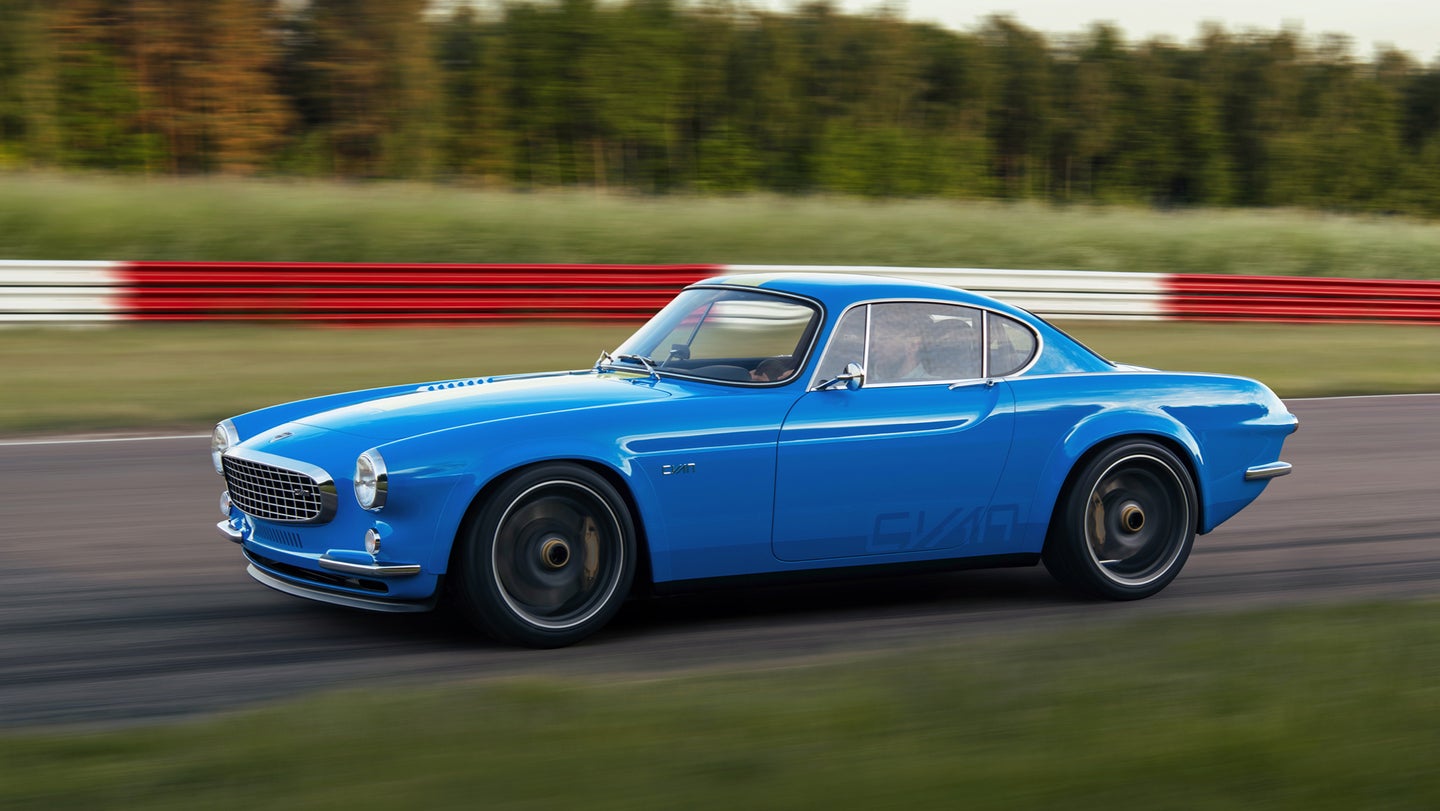 Geely's motorsport partner and three-time touring car world champions Cyan Racing may have moved on to racing Lynk & Co cars, but for years, they were Volvo's factory team. Now they're taking those years of Volvo experience to create something new: the Volvo P1800 Cyan.

The P1800 Cyan is an incredible 420-horsepower reimagining of Volvo's most iconic sports car, the P1800. Thanks to its bespoke carbon fiber and high-strength steel chassis, the P1800 Cyan weighs just 2,183 lbs. Best of all, it packs an engine with a direct connection to the one in the team's world title-winning Volvo.

Some eagle-eyed readers spotted this very P1800 Cyan prototype in July, but the speculation that this could be the next big factory-backed electric conversion was off. This car, which was based off of a 1964 P1800, was a Cyan Racing car as we suspected, though—and they intentionally wanted it to be an internal combustion-powered throwback. In today's announcement, Cyan Racing CEO and founder Christian Dahl described the P1800 Cyan as more of a time capsule, combining the beautiful 1960s sports car with some of the best modern-day analog sports car tech.

In fact, Cyan Racing went out of its way to note that there are no driver aids to save you from yourself on their reimagined P1800. No ABS. No stability control. Not even a brake booster.

The engine is the true gem of this build. This 2.0-liter turbocharged inline-four engine is based on the one used in the 2017 championship-winning Volvo S60 TC1 race car. It features a 7,700-RPM redline and produces 420 hp and 336 pound-feet of torque.

It's an engine Cyan Racing had been working with since it debuted in 2011 in the Volvo C30 World Touring Car Championship car. Cyan Racing wanted to keep some connection to the P1800's original character, though, so they tuned it for a more linear power and torque delivery akin to what you'd experience in the naturally aspirated sixties classic. Peak power is achieved higher up in the rev range.

The car has a custom five-speed Holinger transmission that's more precise than the original without losing those manual gear changes. That still directs power to the rear wheels of the P1800 Cyan through a custom-geared torque-biasing limited-slip differential. Much larger 18-inch forged alloy wheels with a staggered setup put that power to the ground. The larger wheels help accommodate the car's new four-piston brake calipers.

The P1800 Cyan's body is the result of completely redesigning the original shape of the car to eliminate weak points and increase rigidity. The body makes use of carbon fiber components bonded with high-strength adhesive to its steel parts. These stronger structural components were triangulated to make the P1800 more rigid than ever before. The team repositioned the car's greenhouse, widened the track of the car and fitted larger wheels. In case this wasn't stiff enough, its titanium roll cage should help with that. The overall effect is so subtle that it looks like the P1800 always came that way, and the changes result in a mostly balanced, 47:53 front-to-rear weight distribution.

Underneath the car, the P1800's live axle was replaced with fully independent rear suspension. Both the front and rear suspension are fully adjustable, using custom lightweight components such as double wishbones and aluminum uprights. The two-way adjustable dampers feature Cyan hydraulics as well.

Cyan Racing's link to, well, Lynk, Volvo and the other Geely brands is slightly complicated. They were founded to race Volvos as Polestar, but after Volvo bought the production car tuning arm of Polestar from the team, Volvo got the Polestar name. The team remained a separate entity and renamed itself Cyan Racing. Cyan remains Geely's cross-brand motorsport partner, though, albeit still as a wholly separate entity from the Geely mothership.

Reconnecting with the team's Volvo roots was a must, and this was the perfect project to do that with. The team is known for making roadgoing versions of its successful racing cars, so tweaking a P1800 with racing-inspired mods is their way of answering the question "what if?"

Fortunately, the answer to that question sounds like one of the rawest sports cars we've seen in years.