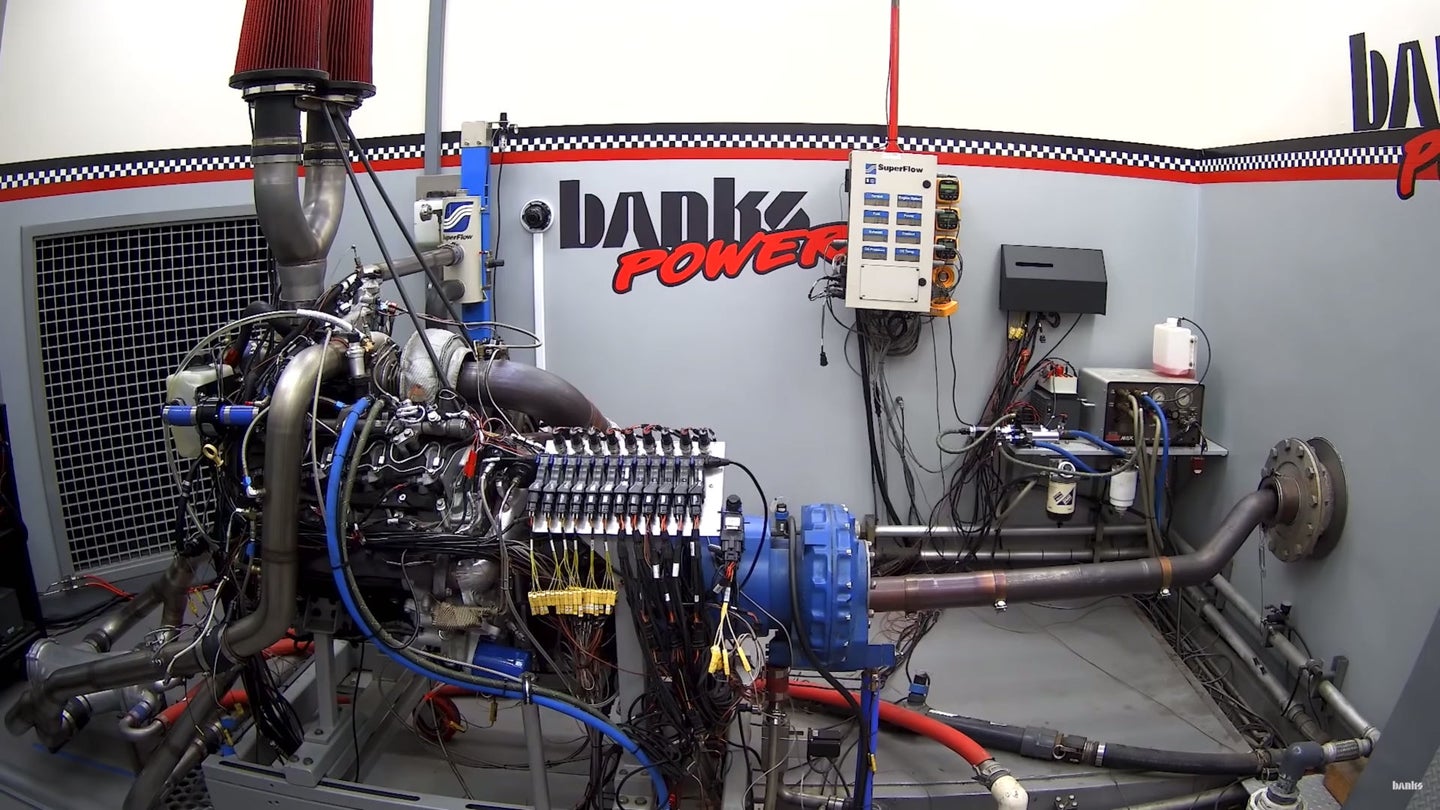 Modern diesel truck engines are, as we know, massively powerful from the factory—each of Detroit's Big Three has heavy-duty pickups that hover around or above 1,000 pound-feet of torque. General Motors' 6.6-liter Duramax V8 is the modest one of the bunch with "just" 445 horsepower and 910 pound-feet, though it's certainly capable of more. In fact, turbocharging pioneer Gale Banks has been trying to blow one up for the better part of a year now and can't seem to manage it, even when pushing 852 hp to the stock block and internals.

Banks turned his trials into a YouTube series in which you can watch hours of video, all aimed at making the current-gen L5P Duramax throw its "crank on the floor or heads on the ceiling." From starving it of fresh air to pushing more boost than any reasonable man would think to, he's done nearly everything to the power plant while monitoring all sorts of parameters. In a special treat for engine nerds, Banks even gives a step-by-step breakdown of changes in max cylinder pressure, manifold air density, and more from one modification to the next. Pretty neat stuff, if you're into that sort of thing.

The highlight of it all, though, is hearing Banks yell "Let's bang this turkey!" over and over.

For his most recent tests, the industry veteran fitted a set of 50-over Denso injectors to bump fueling up a notch. Now, it's on par with the extra air provided by a 7675 Precision turbocharger. Having already pushed the Duramax—which still sports its factory internals—to 711 hp, Banks and his crew utilized a Banks Power iDash setup to monitor the engine's vitals while seeking out even more power.

Impressively, the 6.6-liter didn't miss a beat despite producing nearly double its factory horsepower output. As Banks points out after the engine's dyno pull, the air-to-fuel ratio (AFR) is starting to lean out as the Precision turbo approaches its max. Likewise, EGTs are starting to climb due to the heavily worked turbine wheel. These can both be solved by providing more air and stepping up to a larger blower.

Further down the chart, it shows the effects of the engine's stressed fuel system. In the 852-hp test, the 50-over injectors are run much closer to their limit than during the 711-hp pull. This drives up metrics such as main injection event crank angle, fuel burn, and crank angle at maximum cylinder pressure. The Duramax has essentially become less efficient as it's using 24.3 percent more fuel but only making 19.8 percent more horsepower.

Lastly, exhaust manifold pressure saw a significant spike while cylinder fill actually fell a bit, which Banks attributes to restrictive piping. Once these issues are addressed, the Duramax will theoretically be able to push for more top-end power. Oh, and for the record, torque now measures 1,322 pound-feet at peak horsepower RPM—there's no telling what sort of numbers it's making lower down in the rev range.

General Motors has undoubtedly left plenty of performance on the table with its current-gen Duramax. If you own a heavy-duty Chevy Silverado and are tired of losing to Fords in your daily dually drag race, then maybe give these guys a ring—they seem to know what they're doing.