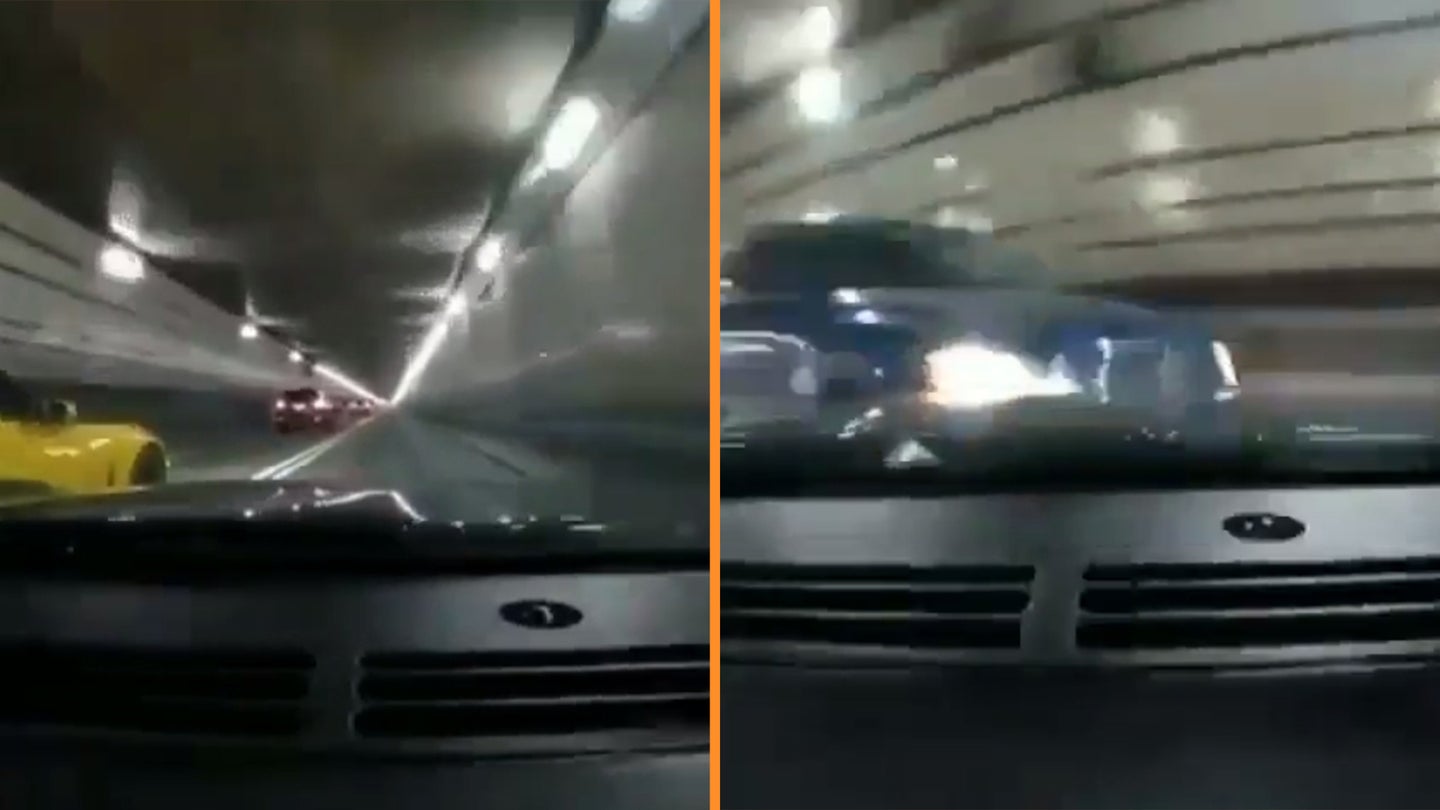 A New Jersey father and son were arrested Tuesday after racing each other through traffic New York City's Lincoln Tunnel in a pair of Chevy Corvettes, causing a multi-car crash, and later posting dash cam video of their actions on Instagram, according to CBS New York.

Chadwick Quinones, 25, and his father, Fred Ordine, 44, were speeding through the Manhattan-bound tube of the Lincoln Tunnel—one of the most highly-trafficked tunnels in the country—in their blue and yellow Corvettes back on February 9. The dash cam video, filmed from Quinones' car, makes it painfully clear how terrible of an idea that was. He's seen blasting down the right lane, passing buses and cars before really opening it up on a long straight. Suddenly, Ordine in his yellow 'Vette comes charging up in the left lane in an attempted overtake.

But he runs out of room as the pair reach slower traffic and bumps into Quinones as he tries to dive back into the right lane behind him, setting off a multi-car crash that wraps up at least two innocent bystanders in a Jeep and a Volkswagen. The video then cuts off. Quinones reportedly fled the scene—impressive considering the hits his Corvette took—and then returned an hour and a half after the accident. Police issued three tickets for careless driving, failure to show registration, and leaving the scene of an accident. Thankfully, no one was injured.

The story might have ended there had Quinones resisted the urge to post the dash cam clip on Instagram. But earlier this fall, he finally gave into that curious temptation. Detectives with the Port Authority Police Department soon became aware of the clip and re-opened their investigation into the crash, at which point Quinones removed it from his account. We all know that's not how the internet works. The video had long since been copied and re-shared widely.

Police arrested the father and son racers on Tuesday on additional charges of reckless endangerment, reckless driving, and holding an illegal speed contest. Something tells us "We did it for the 'Gram" isn't going to go well in Manhattan criminal court.