Is This Airbus A380 High Altitude Fly-By Close Enough to Be Called a 'Near Miss'? 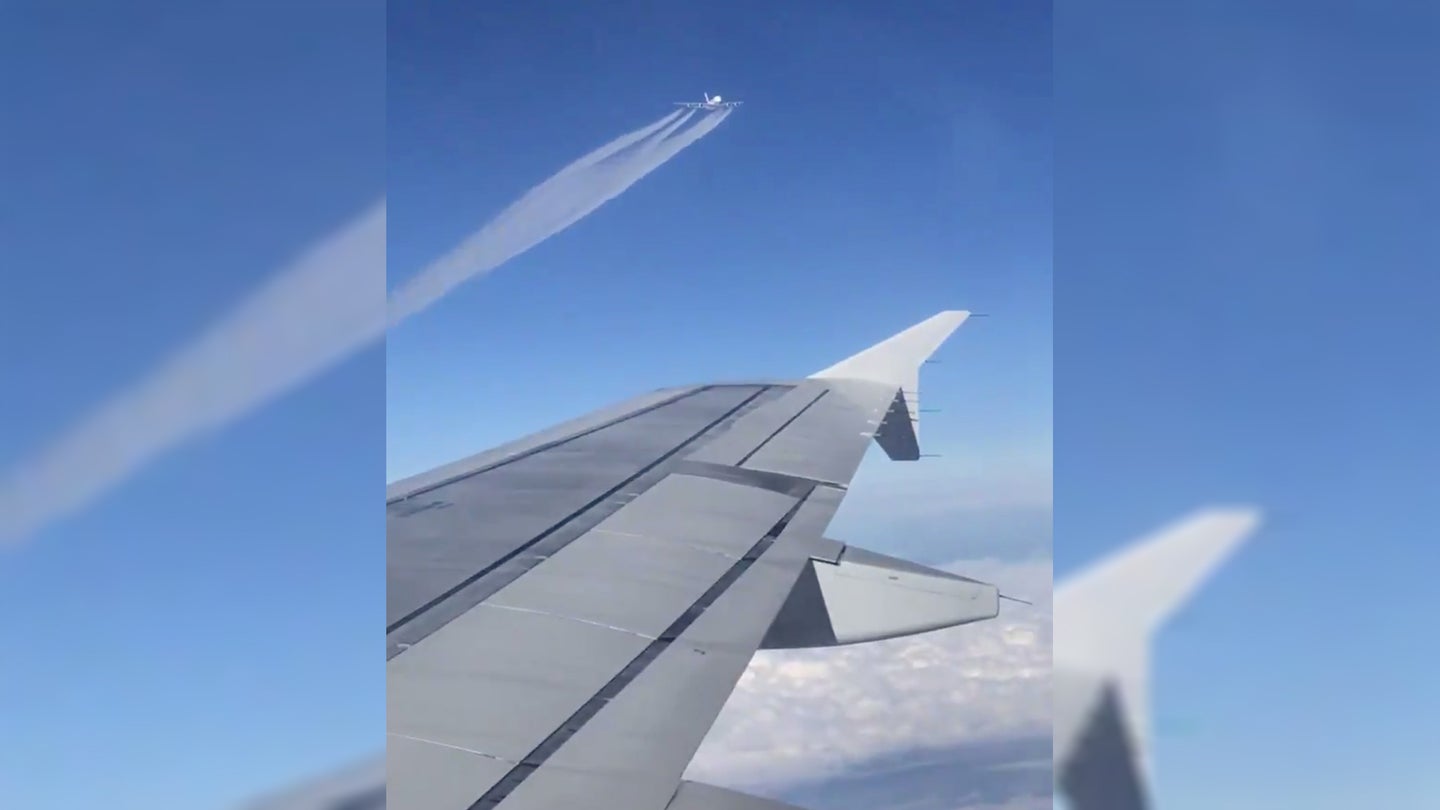 It has to rank among every airline passenger's top fears, right up there with being stuck and being stuck on the middle seat of a transatlantic flight with a petulant runaway, Andy Rooney, Jerry Seinfeld, and Andy Dick: looking out the window and seeing a monster on the wing no one else can see another plane coming straight at you, leaving you just enough time to let out a Comic Book Guy-esque statement of remorse before your life winks out in a burst of explosive decompression.

Well, at least one passenger on a European flight went through something close to that emotional roller coasters on Wednesday, when an Airbus A380 came flying past his plane while zipping along at cruising altitude.

The passenger, William Cherry, posted video of the near miss on his Twitter account, showing the superjumbo jet—which appears to be one of the A380s flown by Emirates—passing by his Aer Lingus flight from Dublin, Ireland to Lisbon, Portugal during a flight on February 27th.

While the video is certainly the sort of footage sure to jar any uneasy fliers, we at The Drive can't help but wonder: Is the incident seen here really all that near a miss?

While it's certainly closer than seems both the cunning Lingus pilots and their superjumbo-flying compatriots actually have left a fair amount of space between their planes. Keep in mind, the passing Airbus is seen against an empty sky, with no other nearby reference points to judge how far beyond the wing it actually is. And the A380 isn't exactly small. As we pointed out a couple weeks ago when Airbus announced it would be winding down production of the jet, the two-story, four-engine jet is 239 feet long and 262 feet across—in other words, roughly the size of a small baseball field.

In addition, the rules regarding the amount of space required between aircraft don't appear as strict as one might think. According to The Independent, United Kingdom aviation rules say aircraft should be separated by three miles horizontally below 29,000 feet, with the Civil Aviation Authority saying that normally increases to five miles above that altitude. That's generally corroborated by information The Drive unearthed on the Aviation StackExchange forum—but the post also adds that it is indeed common for jets to cross paths with 1,000 feet of airspace between them if traveling perpendicular to one another.

As the incident occurred over European airspace, FAA rules presumably wouldn't apply to the planes involved at the time of the fly-by. As travel writer Michael Gebicki points out in a post for Australia's Traveller, however, most of Europe falls under Reduced Vertical Separation Minimum airspace rules, where the 1,000-foot separation distance applies all the way to 41,000 feet.

In addition, modern commercial airliners are outfitted with something called a traffic collision avoidance system, which scans the area around the plane for other aircraft with active transponders. In the unlikely event that air traffic control—which, keep in mind, monitors commercial air traffic and coordinates with pilots as they fly between airports—was unable to notice two planes on a collision course, the TCAS would notify the pilots of the potential crash, giving them time to avoid the other aircraft.

So it seems likely that, while the two planes may haves seemingly passed close to one another considering the size of the sky, there was almost zero risk of those two aircraft slamming into each other in the skies above Europe this week. That said, this incident does give us an excuse to leave you with the immortal words of George Carlin.